Two volunteer firefighters died while battling blazes around Sydney, authorities said on Friday, forcing Australia‘s Prime Minister Scott Morrison to cut short a holiday in Hawaii that had fuelled public anger at the government’s response to the crisis.

Australia has been fighting bushfires across much of its east coast for weeks, leaving eight people dead, more than 700 homes destroyed and nearly 1.2 million hectares (3 million acres) of bushland burned.

As fires ringed Sydney, Australia’s most populous city, the firefighters’ truck hit a tree and rolled over just to the south of the city, killing the driver and a front passenger, police said. Three other people were injured.

“There is no finer person available in my view than someone who is willing to put themselves on the line for the want of nothing in return, no remuneration, nothing other than to make a positive difference in their local community,” New South Wales (NSW) Rural Fire Service Commissioner Shane Fitzsimmons told reporters.

“There is a definition of hero and these two line up to it.” 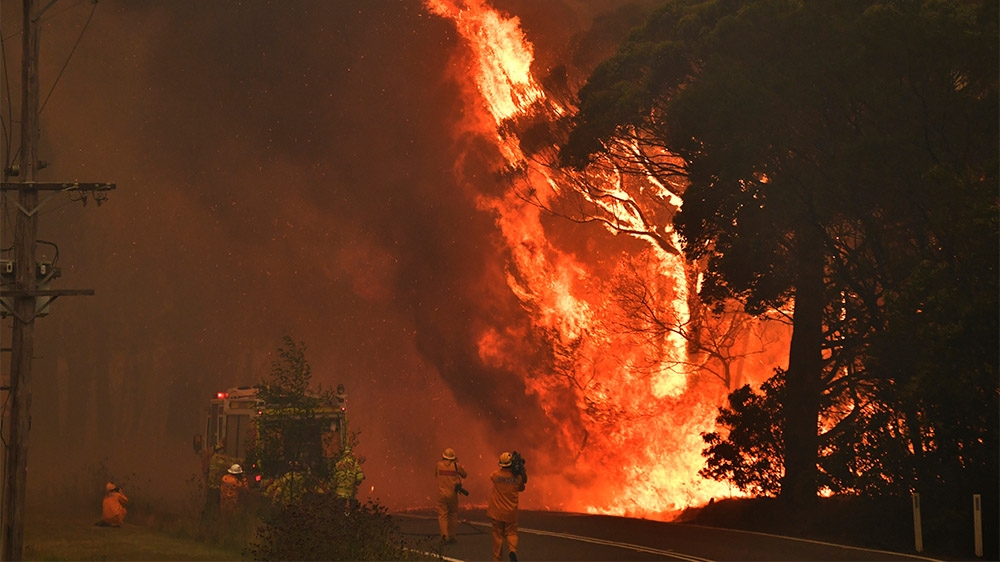 Firefighters, many of them volunteers, are battling around 100 fires that have encircled Sydney amid drought and record-high temperatures [Mick Tsikas/AAP Images via AP Photo]

Earlier, three other firefighters were engulfed by flames as fierce winds fuelled bushfires across the same state. Two men were airlifted to hospital with burns to their faces, arms and legs, while a female colleague was taken by ambulance to hospital.

Bushfires are common in Australia’s hot, dry summers, but the ferocity and early arrival of this season’s fires – during the southern hemisphere spring – is unprecedented.

The crisis has fuelled widespread public anger, with protests around Australia. Morrison’s decision to go on holiday to Hawaii despite the crisis triggered a wave of anger and added to criticism that his government is failing to deliver adequate climate change policies.

Just hours after confirmation of the deaths of the firefighters, Morrison said he would be returning and issued an apology.

“I deeply regret any offence caused to any of the many Australians affected by the terrible bushfires by my taking leave with family at this time,” Morrison said.

Temperatures are expected to soar again as Morrison arrives back in Australia.

While it was cooler on Friday, temperatures are expected to rise beyond 40 degrees Celsius at the weekend, adding to concerns of a fresh wave of fires across NSW.

The fires have resulted in days of heavy pollution in Sydney, a city usually known for its sparkling harbour and blue skies.

Many commuters have donned breathing masks in recent weeks as air quality has plunged to hazardous levels.