Islamabad, Pakistan – The government of Pakistan will be filing a complaint against a senior judge who, heading the bench that convicted former military ruler Pervez Musharraf for high treason, called for the former president’s corpse to be displayed outside Parliament.

Judge Waqar Ahmed Seth, in personal observations recorded in a detailed verdict that was released on Thursday, said the former president should be apprehended and hanged by authorities as soon as possible.

“And if [Musharraf is] found dead, his corpse be dragged to the D-Chowk [in front of Pakistan’s parliament building], Islamabad, Pakistan, and be hanged for three days,” read the observation.

A special court convicted and sentenced Musharraf to death on Tuesday, an unprecedented verdict in a country that has been ruled by its powerful military for roughly half of its 72-year history.

Musharraf has lived in self-imposed exile in the United Arab Emirates (UAE) since 2016 and says he will appeal the verdict at the Supreme Court.

In a video message released from a hospital bed in Dubai on Thursday, Musharraf said he “respects the judiciary greatly”, but repeated his accusations that the court did not give him a fair trial.

“This case is only being pursued because some people have a personal vendetta against me, to target an individual,” he said.

Following that meeting, the government announced it would be filing a reference against the judge, who is also the chief justice of the Peshawar High Court, for his observations. Federal Minister of Law and Justice Farogh Naseem termed the verdict “unprecedented and despicable”.

“This is an attempt to take Pakistan into dark ages,” he said.

Earlier, military spokesman Major-General Asif Ghafoor addressed a news conference at army headquarters in Rawalpindi, alleging that the verdict was part of a conspiracy to destabilise Pakistan.

“Today’s verdict, and especially the use of [certain] words in it are against humanity, religion, culture and values,” he said.

Musharraf was appointed as army chief in 1998 and seized power in a military coup a year later, dismissing the government of Prime Minister Nawaz Sharif and appointing himself as chief executive. He would go on to rule the country for nine years.

The 167-page verdict was released by the special court that has been trying Musharraf since 2014 for actions undertaken while he was president and army chief in 2007.

In November that year, Musharraf had imposed a state of emergency and suspended the constitution following widespread protests against his rule that started after a failed attempt to remove the then-chief justice of the Supreme Court.

Thursday’s full verdict detailed the three-member bench’s reasoning in convicting Musharraf for committing high treason on five counts during the November 2007 emergency. The verdict was split 2-1, with the dissenting judge arguing that no legal definition for “high treason” had been established.

The court rejected Musharraf’s assertion that he had not been given the opportunity to defend himself, saying he had refused to present evidence or testimony.

“We are of the considered view that the accused in this high treason case has been afforded more than his due share of fair trial,” read the verdict. “The accused who has been given every opportunity to defend himself, has by his conduct in the proceedings only evinced his utter contempt for the law and legal institutions in this country.”

The court ruled that by imposing the state of emergency and passing regulations in the days following it, Musharraf had given himself “sweeping and enormous powers indeed and clothed the accused with the authority of a dictator”.

In separate comments, both Judge Shahid Karim, who concurred with the guilty verdict and Judge Nazar Akbar, who dissented from the verdict, disagreed with Judge Seth’s assertions regarding the public display of Musharraf’s body. 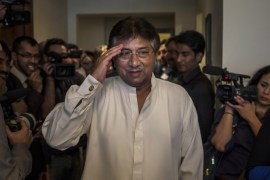 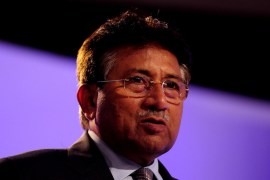 After conviction, what next for Pakistan’s Pervez Musharraf? 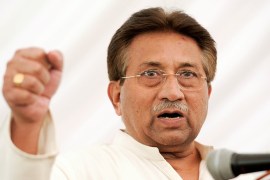 Musharraf, who is in self-imposed exile in Dubai, has been on trial for imposing a state of emergency in 2007.