The chief minister of the southern state of Telangana has said the accused in the rape and murder case of a woman will be tried in a fast-track court after a public backlash.

“The chief minister [Chandrashekhar Rao] has instructed officials that the accused of the woman veterinary doctor’s ghastly murder should be inquired on a fast-track, and culprits should be given stringent punishment,” Telangana chief minister’s office said in a statement on Sunday.

Rao, who has been criticised for his silence on the brutal murder, described the rape and murder of the veterinarian a “gruesome and an inhuman act”.

Hundreds of people on Saturday laid siege to a police station where four men are being held over the latest gruesome rape-murder to shock India.

Baton-wielding police pushed back crowds from the building in the southern city of Hyderabad where they said the 27-year-old veterinary doctor was gang raped, killed and her body burned in Shadnagar, about 50km (31 miles) from Hyderabad, on Thursday.

While the suspects were quickly arrested, the killing sparked new outrage in a country that has been in the international spotlight over its handling of sexual assaults since the brutal gang rape and murder of a student on a New Delhi bus in 2012.

“How anyone could subject another human being to such terrible, unprovoked violence is beyond imagination,” said former opposition Indian National Congress party leader Rahul Gandhi on Twitter.

Police said medical evidence would be hard to obtain given the state of the body but they were working on the assumption the victim had been raped.

The vet, who cannot be named, was allegedly abducted on Wednesday night after she left her scooter near an expressway toll booth, according to the police.

The four men are alleged to have deflated a tyre while she was away and offered to help when she returned to collect it.

The victim called her younger sister to say she was stranded and that a group of men had offered to fix her motorcycle.

The woman said she was “afraid”, according to her sister’s testimony to police. The sister called back later but the victim’s phone was switched off.

Police said the ashes of the woman’s body were found on Thursday morning. The body had been wrapped in a blanket and doused with kerosene.

The victim’s mother demanded that the culprits be burned alive, the Times of India newspaper quoted her as saying, while the hashtag #HangRapists trended on the Indian social media.

“If your blood doesn’t boil even now, it’s not blood but water,” they chanted.

According to government figures, more than 32,000 rape cases were reported in 2017. Experts, however, say the crime is vastly unreported.

India’s National Commission for Women, which advises the government on policy regarding women’s rights, condemned the incident, saying it “won’t leave any stone unturned till these perpetrators get the punishment they deserve”.

But feminists and activists in India say the government has failed in checking the crimes against women.

“The fact that our governments are not doing enough to make streets well lit and safer for women to be out in big numbers, that is the problem. That our police encourages victim-blaming, that is the problem,” Kavita Krishnan of the All India Progressive Women’s Association told Al Jazeera from New Delhi.

Krishnan said India needs a “more women-friendly atmosphere where they do not feel judged for being out in public spaces” and demanded a “more gender-sensitive response” from the public institutions, mainly the police and the judiciary.

“[The] judiciary is interested in regulating women’s sexuality and judging them rather than offering them justice,” she said.

Women’s groups also turned against a minister in Telangana state, which includes Hyderabad, who said the woman could have been saved if she had called the police first instead of her sister.

“Is there no shame?” said Swati Maliwal, the head of the Delhi Women’s Commission. “Now the blame is being put on the dead victim.” 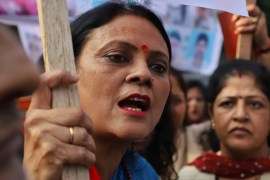 Four accused remanded in judicial custody for 14 days over suspected rape and killing of 27-year-old veterinarian. 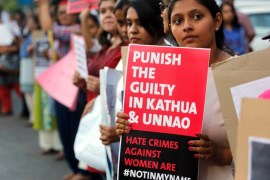 The brutal rape and murder of an eight-year-old girl from a Muslim minority group is not just about gender violence. 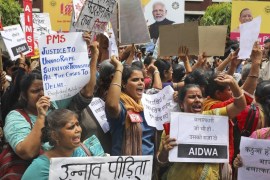 Veterinarian, 27, was reportedly attacked and her body burned after the motorbike she rode broke down.