Washington, DC – The day after the United States House of Representatives voted to impeach President Donald Trump played out much like the day before: with partisan jabs, name-calling and fighting over next steps.

Trump was impeached on Wednesday for obstruction of Congress and abuse of power related to his dealings with Ukraine.

The votes came down largely along party lines with only two Democrats voting against the abuse of power article, and three Democrats against obstruction of Congress charge. All Republicans who were present voted against the impeachment articles, and the one Independent in the House voted in favour.

Wednesday’s votes followed six hours of heated debate over the articles with Democrats trying to lay out their case, and Republicans attacking the process itself.

The votes set up a likely trial in the Senate, but when a trial would take place and what it would look like remains a major point of contention between the parties.

House Speaker Nancy Pelosi added to that contention on Wednesday night when she evaded questions on when she plans to send the articles to the Senate, which must happen before any trial can occur.

“It would have been our intention” to send the articles immediately, but “we’ll see what happens over there,” Pelosi told reporters, referring to the Senate.

On Thursday morning, she again reiterated that Democrats were waiting to “see the process that is set forth in the Senate” before naming House managers who would act as prosecutors in the trial. She did not say, however, if, or when, she planned to send the articles to the Senate.

More than two dozen Democrats have urged Pelosi to withhold the articles until trial plans acceptable to the Democrats were agreed upon.

Trump, however, railed against any delay.

“I got Impeached last night without one Republican vote being cast with the Do Nothing Dems on their continuation of the greatest Witch Hunt in American history,” the president tweeted. “Now the Do Nothing Party want to Do Nothing with the Articles & not deliver them to the Senate, but it’s Senate’s call!”

On the Senate side, the top Republican and Democrat gave duelling speeches on the chamber’s floor.

Senate Majority Leader Mitch McConnell accused Pelosi of being too scared to send the House’s “shoddy work product to the Senate”.

He called the Democratic-led House proceedings “the most rushed, least thorough, and most unfair impeachment inquiry in modern history”.

“Moments like this are why the United States Senate exists,” he said.

“Leader McConnell claimed that the impeachment of President Trump is illegitimate because the House voted along party lines,” Schumer said.

“Forgive me, but House Democrats cannot be held responsible for the cravenness of the House Republican caucus and their blind fealty to the president,” he added.

Schumer has presented a proposal for a trial that would kick off the week of January 6 and include four witnesses not heard from in the House proceedings, including acting White House Chief of Staff Mick Mulvaney and former Trump National Security Adviser John Bolton.

McConnell has previously appeared to reject that plan, however, saying the Senate was not going to do “House Democrats’ homework for them”.

McConnell and Schumer met late on Thursday. The Senate majority leader said the pair had a cordial conversation, but continued to disagree on whether witnesses should be heard.

According to constitutional scholars, there is no obligation for House to send the articles of impeachment to the Senate to trigger a trial.

“Unless and until Speaker Pelosi decides to present the articles to the Senate, as I understand the Constitution, the Senate has no authority to proceed,” said Laurence Tribe, a constitutional law professor at Harvard Law School, who had advocated that the House delay a Senate trial.

“This is only the first time this issue has arisen,” Tribe told Al Jazeera. “It’s a question that has never been resolved.”

The impeachment inquiry of Trump centred on a July 25 phone call between the US president and his Ukrainian counterpart. Democrats allege Trump abused his power of office by organising a pressure campaign to exhort a promise from Ukrainian President Volodymyr Zelenskyy to announce investigations into Trump political rival and former Vice President Joe Biden and a debunked conspiracy theory that Ukraine, not Russia, interfered in the 2016 US elections.

On the July call, Trump urged Zelenskyy to open an investigation into Biden, who is also a 2020 Democratic presidential frontrunner, and his son, Hunter, who had served on the board of a Ukrainian gas company. There has been no evidence of wrongdoing by the Bidens.

The call came to light in a whistle-blower complaint, prompting the Democrats to announce an impeachment inquiry in September.

The inquiry saw more than a dozen witnesses, hours of testimony and hundreds of pages of reports. Trump refused to participate in the inquiry and directed his officials to do the same, prompting the obstruction of Congress article of impeachment.

Trump has repeatedly denied any wrongdoing, calling the inquiry a “sham”, “hoax”, and “witch-hunt”.

Trump is only the third US president – behind Andrew Johnson in 1868 and Bill Clinton in 1998 – to be impeached. No president has ever been removed from office via impeachment process laid out in the constitution.

Trump’s impeachment comes less than two months from the start of the primary elections.

National elections for president, all 435 members of the House and 35 of 100 senators are scheduled for November 3, 2020. 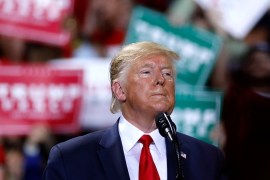 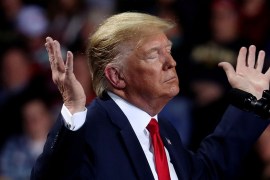 Trump after impeachment: All the latest updates

Live updates as the US reacts to the House impeachment of President Donald Trump. 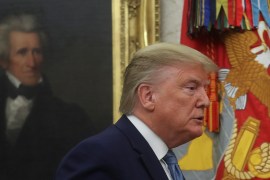 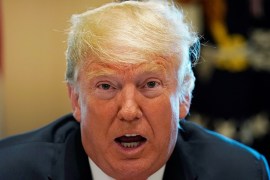