Washington, DC – The United States House of Representatives is expected to vote on Wednesday to impeach President Donald Trump for obstruction of Congress and abuse of power related to his dealings with Ukraine.

If the articles of impeachment are approved, as expected, Trump would become only the third US president to be impeached. No US president has been removed from office via the impeachment process.

Democratic Speaker Nancy Pelosi has the majority she needs to approve the two pending articles of impeachment, members said on Tuesday. Wednesday’s votes, which are set for sometime in the afternoon or early evening, are expected to play out largely among party lines.

Democrats control the House 233 to 197 seats over Republicans, with one independent and four vacancies.

The impeachment process has deepened political divides in the US as the country heads for the 2020 presidential election. Those divides were on further display on the eve of the House votes.

In a vitriolic six-page letter to Pelosi on Tuesday, Trump called the House’s impeachment drive a “charade” and a “colossal injustice”.

“You are turning a policy disagreement between two branches of government into an impeachable offence,” Trump said in the letter.

“I have no doubt that the American people will hold you and the Democrats fully responsible in the upcoming 2020 election,” Trump wrote. 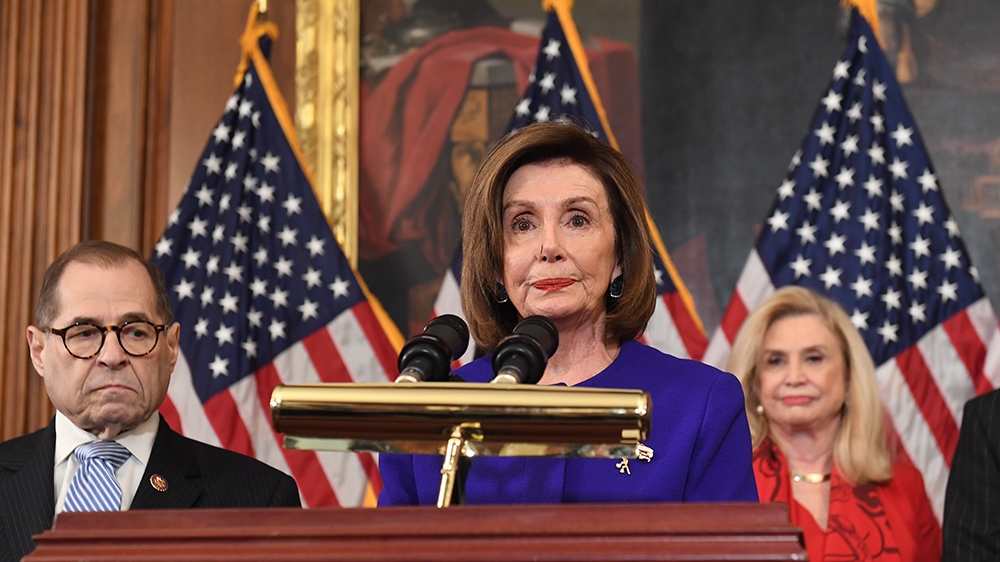 She wrote her own letter, urging her colleagues to “support and defend our constitutions from all enemies, foreign and domestic”.

“Tomorrow the House of Representatives will exercise one of the most solemn powers granted to us by the Constitution as we vote to approve two articles of impeachment against the president of the United States,” House Speaker Nancy Pelosi said in a letter to fellow Democratic legislators on Tuesday.

“During this very prayerful moment in our nation’s history, we must honor our oath to support and defend our Constitution from all enemies, foreign and domestic,” she added.

Following a day of divisive rhetoric, hundreds of rallies were held across the US in support of impeachment on Tuesday night. US media also reported counter-rallies in some cities.

On Wednesday, Trump continued his rhetoric, tweeting: “Can you believe that I will be impeached today by the Radical left, Do Nothing Democrats, AND I DID NOTHING WRONG! A terrible Thing. Read the transcripts. This should never happen to another President again. Say a PRAYER!”

Wednesday’s proceedings will kick off at 9am (14:00 GMT) with debate on the rule governing the longer impeachment debate. After the rule is approved, there will then be six hours of debate, divided equally among Democrats and Republicans before the final votes.

At the centre of the Democrats’ impeachment of Trump is a July 25 telephone call the president had with newly-elected Ukraine President Volodymyr Zelenskyy.

In the call, Trump urged Zelenskyy to investigate former Vice President Joe Biden, and his son, Hunter, who was on the board of Burisma, a Ukrainian gas company, 2014 until his term expired in April this year.

Biden is a leading contender in the race for the Democratic nomination for president in 2020. There has been no evidence of any wrongdoing by the Bidens.

In actions leading up to and following the phone call with Zelenskyy, Democrats allege Trump abused the power of the US presidency by organising a scheme to extort a promise from Zelenskyy for the investigation. At the time of the call, Trump was withholding $391m in military aid to help Ukraine defend against Russia. 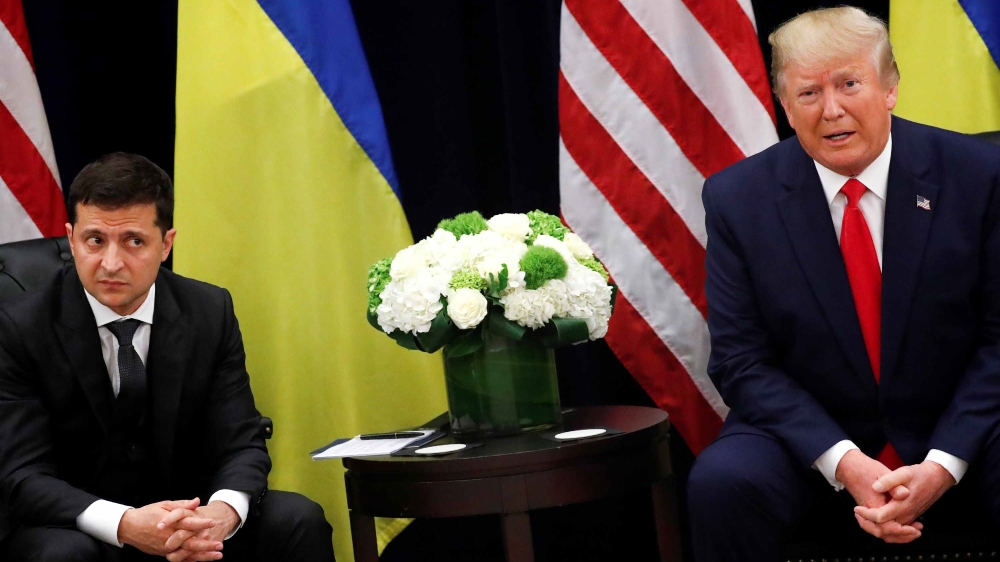 In addition to withholding the military aid, Trump was conditioning a White House meeting for Zelenskyy on Ukraine announcing an investigation into false disinformation that Ukraine, not Russia, conducted the cyberattacks on the US elections in 2016, according to witnesses who appeared before the House Intelligence Committee as part of the investigation.

Trump has denied any wrongdoing. The president and his Republican political allies have called the House’s impeachment inquiry a “sham” and a “witch-hunt” that was “rushed” and “partisan” ahead of next year’s election.

As thousands rally across the US ahead of the vote on Trump impeachment, we look at what exactly is impeachment – and how does it work? #ImpeachmentRally pic.twitter.com/kMojoNlg7r

“Time and clock is a terrible master,” said Representative Doug Collins, the top Republican on the Judiciary Committee.

The record produced by Democrats “is based on presumption and hearsay” and “we’ve disproven the facts” alleged against Trump, Collins said.

Zelenskyy has said he was not pressured, Collins said. “The guy who was supposed to be being pressured denied it ever even happened.”

Further, as president, Trump “had plenty of other reasons” to withhold aid to Ukraine, other than the political investigations that were sought, Collins added.

Eventually, the military aid was released to Ukraine in September, and thus no harm was done, Republicans say.

But Democrats dispute that argument, saying Trump’s efforts to pressure Zelenskyy amounted to an abuse of power.

Democratic Representative Jim McGovern, a member of the House leadership, described Trump’s conduct as “a crime in progress”.

“We have an election coming up in less than a year and the president is openly trying to encourage foreign interference in this election,” McGovern said on Tuesday. “It’s wrong. That is just so wrong.”

The president and his lawyers declined offers by Democrats to participate in the Judiciary Committee’s hearings on the articles of impeachment. The White House blocked nine officials from testifying in the House inquiry and instructed agencies to withhold documents.

“All of their testimony is essentially un-contradicted and unrefuted. It tells one story,” said Representative Jamie Raskin, a Democratic member of the Judiciary Committee who has played a leading role in articulating the case against Trump.

“The president of the United States has tried to drag a foreign power into our elections for his own political advantage,” Raskin said.

Trump’s personal lawyer Rudy Giuliani, who was at the heart of Trump’s pressure campaign on Zelenskyy, recently returned from a trip to Ukraine where he now claims to have gathered new information.

Appearing on Fox News on Tuesday, Giuliani acknowledged that he pushed for former US Ambassador to Ukraine Marie Yovanovitch to be removed from her post in Kyiv.

Yovanovitch, who was an anti-corruption campaigner, testified in the impeachment inquiry that she was removed from her post in Kyiv after Giuliani conducted a phoney smear campaign against her.

“I didn’t need her out of the way. I forced her out because she’s corrupt,” Giuliani told Fox News.

Under the US Constitution, the House votes on Wednesday, if in favour of impeachment, set up a trial in the Republican-controlled Senate for January.

Senate Republican Leader Mitch McConnell told reporters on Tuesday he is coordinating strategy for the trial with the White House to obtain an acquittal of the president.

“I’m not an impartial juror. This is a political process. There’s not anything judicial about it,” McConnell said.

Senate Democratic Leader Chuck Schumer had asked McConnell to agree to allow some of the House’s witnesses to speak at a Senate trial. McConnell appeared to deny the request.