Protests against India‘s new citizenship law have spread across the country as 200 million Muslims fear the legislation is part of the Hindu nationalist government’s agenda to marginalise them.

Hindus, Sikhs, Jains and Christians from Pakistan, Afghanistan and Bangladesh can acquire Indian citizenship as per the new law, which blocks naturalisation for Muslims.

Critics say the law – similar to US President Donald Trump’s Muslim ban – goes against the spirit of India’s secular constitution. Rights groups and a Muslim political party have challenged the law in Supreme Court.

In the northeastern parts of India, the protests are mainly against allowing any “foreign migrant” from Bangladesh – irrespective of religion – to settle in the region.

On December 15, more than 100 students were injured and dozens arrested after police stormed New Delhi’s Jamia Millia Islamia (JMI) and Aligarh Muslim University (AMU), located 130km (81 miles) from the capital, to disperse the protests against the contentious law.

Since the attack, solidarity protests have also been held across the South Asian country.

India’s Supreme Court has refused to stall the implementation of the contentious Citizenship (Amendment) Act, which has triggered massive protests across the country.

The court sent a notice to the federal government, asking it to respond to nearly 60 petitions challenging the constitutional validity of the law. The next hearing will be held on January 22, Reuters news agency said.

The petitioners argue that religion cannot be the basis of granting citizenship to undocumented migrants. The new law, they say, is against the secular principles of India’s constitution.

India’s main opposition Congress party and the Asom Gana Parishad party, an ally of the ruling BJP in Assam state, are among those who have filed the petitions.

Police have carried out patrolling in New Delhi’s Seelampur area after a protest held in the area over the citizenship law turned violent on Tuesday.

Why Indians are protesting against new law

Although the new law has triggered protests across the country, the protesters have different reasons to take to the streets. Here are the three main reasons.

In Muslim-populated areas of Delhi, buses and a police outpost were torched and tear gas filled streets as thousands of protesters hurled stones at police in Seelampur district.

Police said 21 people, including 12 policemen, were injured in the clashes, the Press Trust of India reported.

In the country’s north, police said 113 people were detained for objectionable social media posts after violent demonstrations there.

In the northeastern state of Assam, the epicentre of the protests where four people died after being shot by police, a curfew imposed in some regions was lifted early Tuesday.

But the Assam government said late Tuesday it would not restore mobile internet services until Friday at the earliest.

It also handed its investigation into the violence to a national agency that usually probes terrorist links.

At least 28 people have been detained in connection with violent incidents in Uttar Pradesh state’s Mau district in northern India, police said, according to India’s ANI news agency.

The agency quoted Mau’s district magistrate as saying that all schools and colleges in the district will remain closed till further orders.

Clashes have erupted in New Delhi between thousands of protesters and police, the latest violence in a week of opposition to the citizenship law.

Police fired tear gas in the New Seelampur part of the capital to push back protesters swarming to barricades and throwing stones. At least two police were injured, a Reuters news agency witness said.

“It was as a peaceful protest against the citizenship bill … but got out of hand,” resident Azib Aman said. Cars were damaged and roads strewn with rocks while small fires on the road sent smoke into the air.

“We have an example in Delhi where police entered Jamia women’s hostel and dragged them out [and] mercilessly beat students,” Gandhi told reporters, according to ANI news agency.

“I think you all have seen that the Modi government seems to have no compassion when it comes to shutting down people’s voices and implement legislation.”

“Stop this guerilla politics. Indian constitution is our only holy book. I appeal to youth in colleges to debate our policies, protest democratically,” Modi said, according to ANI news agency.

The Delhi Metro Rail Corporation (DMRC) has said it has closed at least four metro stations in the Indian capital following protests against the citizenship law.

“Entry and exit gates of Welcome, Jaffrabad and Maujpur-Babarpur, Seelampur and Gokulpuri are closed. Trains won’t be halting at these stations,” DMRC said in a tweet.

The stations were re-opened after about two hours.

Fresh protests against India’s new citizenship law and the attack on university students have erupted across the country.

Thousands of protesters marched in the eastern city of Kolkata in West Bengal for a fresh rally led by Chief Minister Mamata Banerjee, a fierce critic of Modi.

New protests also broke out in the southernmost state of Kerala, while several rallies were planned in the capital New Delhi, according to news agencies.

The court asked the petitioners, senior lawyers Indira Jaising and Colin Gonsalves, to approach the High Courts which have jurisdiction over the two areas where protests against the citizenship law took place.

Police in India have arrested at least 10 people in connection with Sunday’s violence at JMI university that left at least 100 people injured, many of them students, local media has reported.

Delhi Police has said that no Jamia student was among the arrested, according to the NDTV website.

Jamia Vice Chancellor Najma Akhtar has called for a high-level investigation into the police action.

A doctor at Delhi’s Safdarjung Hospital told The Washington Post that two male demonstrators were brought in with bullet wounds. One was shot in the chest and the other in the foot, said the doctor, who spoke on the condition of anonymity because he feared harassment by the police.

The doctor told the newspaper that four police officers escorted the two young men “like prisoners”, adding that both were in stable condition after treatment.

Jamia women who took on Delhi police in viral video

A group of women is being hailed across India for their defiant bravery after a video went viral on social media, showing them confronting baton-wielding police officers to save their friend during a protest in capital New Delhi.

The women, all in their early 20s and students at JMI university, were among the thousands of people agitating against the controversial Citizenship Amendment Act on Sunday.

Students at Delhi University in the capital have said right-wing student groups linked to Prime Minister Narendra Modi’s Bharatiya Janata Party (BJP) were trying to intimidate them for protesting against the citizenship law.

Raniya Zulaikha, student of political science at Ramjas College, said there were groups of students on campus saying anyone who was protesting should leave the country, or go to Pakistan.

Sanija Mithran, another student, said girls who were wearing the hijab were targeted. “They were selecting the girls with hijab and they were pulling their hijab.”

I don't know what happened at Jamia last night; we must be wary of jihadists, Maoists, separatists getting into student protests: FM

Leader of the Congress party, Priyanka Gandhi, daughter of interim president Sonia Gandhi and sister of senior party leader Rahul, sat for a protest at the India Gate war memorial in New Delhi against the police crackdown on student campuses.

“The prime minister should answer what happened at the university yesterday. Whose government beat up the students?” she told reporters, according to India’s ANI news agency.

Students have pelted stones at police who locked the gates of a college in the northern city of Lucknow to prevent them from taking to the streets.

About two dozen students at another college in the city in the BJP-ruled Uttar Pradesh state sneaked out to protest, Reuters news agency reported.

‘No reason to worry’ about India’s law: Bangladesh FM

Bangladesh’s Foreign Minister AK Abdul Momen has said his government has asked India for information on undocumented Bangladeshis so they could be repatriated.

“The Indian government has been telling us repeatedly that they aren’t pushing anyone into Bangladesh. We asked them to inform us about anyone living there illegally. We have a standard procedure for this issue. They will be repatriated as per the procedure,” he told journalists in Dhaka.

Momen’s comments come amid concern that people are being pushed into Bangladesh from the Indian state of West Bengal. He said he was not worried about the impact of the bill on Bangladesh and trusts the government of India. “There is no reason to worry about this,” he said.

Rights group Amnesty International India has urged India’s federal and state governments to “respect the right to dissent” by the students and investigate allegations of police brutality against them.

“Violence against peacefully protesting students cannot under any circumstance be justified,” it said in a statement. “Allegations that the police brutally beat up and sexually harassed students in Jamia Millia Islamia University must be investigated.”

Amnesty said more than 100 protesters in the AMU were also allegedly beaten and that there were reports of police blocking ambulances from going into the university to help the wounded.

This has gone too far.. can’t stay silent any longer . This government is clearly fascist .. and it makes me angry to see voices that can actually make a difference stay quiet ..

Fresh protests have taken place in multiple cities across India, including capital New Delhi and Mumbai, in solidarity with JMI and AMU students who were attacked by the police on Sunday.

Meanwhile, thousands gathered in the eastern city of Kolkata for a major demonstration called by state chief minister Mamata Banerjee against the citizenship law.

The epicentre of the protests has been in India’s northeastern states, where demonstrators have rallied against the law that they say will encourage undocumented immigrants to settle in the region.

At least six people have died in Assam state, which has witnessed violent protests.

“I want to unequivocally assure my fellow Indians that CAA [Citizens Amendment Act] does not affect any citizen of India of any religion… This Act is only for those who have faced years of persecution outside and have no other place to go except India,” tweeted.

Solidarity @arnav_d: Thank you John for speaking up. Thank you. https://t.co/LEpHMFACmM”

India’s main opposition Congress party has expressed solidarity with the protests against the citizenship law, which it said polarises the people.

“The CAB [Citizenship Amendment Bill, now a law] and NRC [National Register of Citizens] are weapons of mass polarisation unleashed by fascists on India. The best defence against these dirty weapons is peaceful, non-violent Satyagraha [insistence on truth],” tweeted Congress leader Rahul Gandhi.

“I stand in solidarity with all those protesting peacefully against the CAB & NRC.”

Students in capital New Delhi’s JMI and Uttar Pradesh state’s AMU had been protesting since the new law was passed last week. 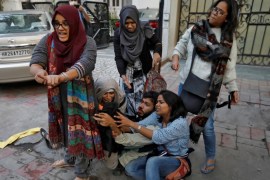 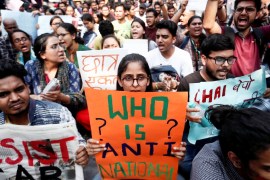 Police use force inside university campuses as people in many parts of India protest citizenship law for a fifth day.