A year ago, protests triggered by a deepening economic crisis broke out in the Sudanese town of Atbara and quickly swept across the country.

Four months later, the persistent demonstrations would lead to the military overthrow of President Omar al-Bashir, whose nearly 30-year rule was marked by conflict, oppression and economic struggles.

It took another four months, scores of lives and a series of delicate talks with the military rulers who overthrew al-Bashir for the protesters to achieve a power-sharing deal to set up a transitional administration and steer the country towards civilian rule.

Here, Al Jazeera takes a look at 12 of the most memorable events of Sudan‘s 12-month uprising.

1) Sudanese take to the streets

On December 19, 2018, protesters in Atbara, north of the capital, Khartoum, take to the streets after bread prices triple overnight.

The price hike follows a government decision to end wheat and fuel subsidies, at the recommendation of the IMF, amid longstanding financial troubles including spiralling inflation and currency chaos.

Before long, protests begin spreading in other parts of the country and escalating into demands for the departure of al-Bashir and his allies.

Read more about what prompted the protests here.

2) ‘Declaration of Freedom and Change’

With protesters making it clear that the public outburst of anger is not simply about Sudan’s economic crisis, a plethora of opposition movements join forces to sign the Declaration of Freedom and Change (DFC).

Unlike past groupings, the coalition is not limited to political actors but brings together a number of women’s associations, community groups, trade unions and academics angry at years of repression and corruption.

The Sudanese Professionals Association, an umbrella group of 17 trade unions, in particular, is at the heart of the new alliance, helping to rally crowds and organise marches aimed at bringing an end to al-Bashir’s rule.

As the protests spread, al-Bashir declares a national state of emergency and appoints security officials to govern the country’s 18 provinces – but the moves only grant the embattled leader a brief reprieve.

On April 6, the anniversary of a 1985 non-violent popular uprising that removed President Jaafar Nimeiri after years of harsh rule, thousands of people converge outside the military headquarters in Khartoum, staging a sit-in that would become the hub of the protest movement’s struggle for democracy.

The mass gathering also marks the emergence of new cracks within Sudan’s multi-layered security apparatus, with several reports suggesting that the army’s rank-and-file is divided over whether to follow orders and crack down on demonstrators or side with them.

4) Women at the forefront

Images of Alaa Salah, a 22-year-old engineering student, leading chants outside the military headquarters prove to be a watershed moment.

Clad in white and standing atop a car, Salah’s plea lays bare that Sudanese women – long victims of al-Bashir’s conservative brand of Islam and the target of so-called “morality rules” – are leading the movement for change.

The symbolism of Salah positioned above other men and indeed guiding them captures the world’s attention.

Read more about the role of women as the driving force behind the protests here and here.

Khartoum breaks out in early celebration on April 11, with chants of “New era, new nation!” filling the streets as word of al-Bashir’s removal begins to spread after state TV says that the military is about to make an “important announcement“.

Indeed, hours later the army high command announces the removal of al-Bashir in the face of the months-long protests.

In a televised statement, Defence Minister General Ahmed Ibn Auf says al-Bashir has been arrested and is being held in a “safe place” (the 75-year-old will later be jailed in Khartoum’s Kobar prison where he had imprisoned thousands of opponents during his rule, which began in 1989 when he seized power in a bloodless coup).

Ibn Auf says a Transitional Military Council (TMC) will run the country for a two-year period, at the end of which he promises “free and fair elections”. The general also declares a three-month state of emergency and the suspension of Sudan’s constitution.

The plan proposed by the TMC is quickly rejected by protesters, whose initial joy for al-Bashir’s removal gives way to anger and disbelief.

Opposition groups accuse the TMC of engineering a “coup” and “bringing back the same faces and the same institutions which our people rose against”, while protesters continue massing outside the military headquarters.

Faced with demonstrators who refused to call it quits, Ibn Awf steps down after just one day at the helm of the TMC.

Al-Bashir’s former right-hand man delegates his authority to General Abdel Fattah al-Burhan, a 59-year-old who protesters see as more amenable to negotiating with the opposition.

Mohamed Hamdan Dagalo, the commander of the Rapid Support Forces (RSF), the feared paramilitary group accused of war crimes in Darfur under al-Bashir, is appointed deputy head of the TMC.

Al-Burhan holds a meeting with the opposition upon assuming his role, promising that the army will hand over power to civilians after the two-year transition, an offer that is again rejected by the alliance behind the DFC.

Talks between the TMC and the alliance of opposition groups grind to a halt amid major differences over who should lead the country to elections.

Demonstrators demanding a civilian-led administration stage a two-day strike in late May as thousands keep converging at the sit-in outside the military’s headquarters.

The TMC says the protest camp has become a threat to the country’s national security. In the early hours of June 3, security forces raid the sit-in, opening fire on protesters, beating them and setting fire to their tents.

Doctors say more than 100 people are killed – with dozens of bodies disposed of in the Nile River – as witnesses and rights groups blame the RSF for the violence, the worst since al-Bashir’s overthrow.

The TMC says a crackdown on criminals in an area usually inhabited by drug peddlers spilled over to the nearby protest camp.

Access to mobile internet is interrupted within hours of the sit-in’s bloody dispersal.

The opposition alliance halts all contact with the TMC and issues a call for a civil disobedience campaign.

On June 30, mass demonstrations dubbed the “millions march” bring much of the capital and its twin city of Omdurman to a standstill.

The color blue, one of our martyrs (Mattar) favorite color, started as a tribute to him, now turned to a symbol of all our martyrs, and their dreams of a better Sudan.#BlueForSudan#IAmSudaneseRevolution https://t.co/3LMxrtBOvi

Amid an internet blackout within Sudan, members of the diaspora quickly take to social media to raise awareness about events unfolding in their homeland.

A blue wave sweeps through platforms such as Twitter, Instragram and Facebook. to honour Mohamed Mattar, a 26-year-old engineer fatally shot during the crackdown and whose favourite colour was reportedly blue.

The SPA, meanwhile, calls on social media users to use the hashtag #IAmTheSudanRevolution to counteract the TMC’s attempt to isolate the country from the rest of the world.

After weeks of protracted negotiations brokered by the African Union and neighbouring Ethiopia, the ruling generals and protest leaders in August sign the constitutional declaration that paves the way for a transition to civilian rule.

The document builds on a power-sharing deal agreed to the previous month and provides for a joint civilian-military ruling body during a transition period of a little over three years.

Some of the deal‘s key points include an agreement on an 11-member government body, called the Sovereign Council, made up five civilians, five military leaders and a consensus civilian agreed to by both. Al-Burhan is to be the council’s head.

“We will have a plan that will address the immediate challenges through our recovery programme, addressing the felt need by the people: issues of inflation, availability of commodities, wheat, fuel, medicine and all such things,” he says after the swearing-in ceremony.

Hamdok’s priorities include bringing peace to the country and reviving its battered economy, including by removing Sudan from the United States’ list of state sponsors of “terrorism” – the designation makes Sudan ineligible for much-needed debt relief and funding from international institutions, while also limiting its potential to attract foreign investment.

A few weeks after being sworn in, Hamdok heads to Juba, the capital of neighbouring South Sudan, for peace talks with rebel leaders amid hopes to end the country’s long-running conflicts.

In early December, during a visit by Hamdok to Washington, US Secretary of State Mike Pompeo says the two countries will “initiate the process of exchanging ambassadors after a 23-year gap”.

On December 14, days before the anniversary of the uprising, a court in Khartoum convicts al-Bashir for corruption and sentences him to two years in detention at a state-run rehabilitation centre.

The judge also ordered the confiscation of millions of euros and Sudanese pounds found in the former president’s residence when he was overthrown.

The SPA welcomes the verdict as a “political and moral condemnation” of al-Bashir and his allies, adding, however, that it was only one of several judicial cases against him.

Al-Bashir is also wanted by the International Criminal Court (ICC) over charges of masterminding genocide, war crimes and crimes against humanity in the restive Darfur region, which he denies. Sudan’s transitional authorities have yet to agree to extradite him to face trial at the ICC. 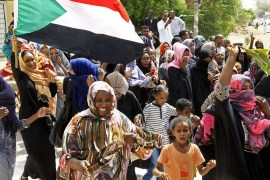 Sudan remains divided between praise for interim government and criticism for slow progress on some issues. 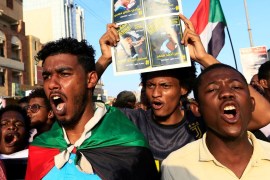 PM Abdalla Hamdok says new law is not an act of revenge, but al-Bashir’s party condemns the decision by ‘illegal gov’t’.