When Adama Barrow assumed The Gambia‘s presidency in early 2017, many in the country viewed him as a possible saviour – someone who would be able to revive a nation reeling from Yahya Jammeh’s brutal 22-year rule.

Barrow promised to raise living standards, bring about democratic reform and set up a truth and reconciliation commission to heal a divided nation.

He also said he would step down after three years, a commitment he has since cast aside in favour of seeing a five-year term to its conclusion in 2021.

This move has outraged many Gambians, who on Monday took to the streets of the capital, Banjul, in their thousands to protest against the U-turn.

10 000s of people are taking to the streets in THE Gambia against Adama Barrow. He promised to leave power after 3 years but says he wants to stay on and complete his mandate- we’re live from Banjul in the next newshour @AJENews pic.twitter.com/fpHDj0pZY6

The demonstrators – part of the Three Years Jotna (Three years is enough) movement – are calling for Barrow to keep to his word and resign next month. The winner of December 2016’s election, Barrow first took the oath of office in neighbouring Senegal in January 2017, as Jammeh refused to cede power, before being sworn in on the Gambian soil the following month.

Analysts say Monday’s protests also reflect dissatisfaction with a presidency that has failed to meet expectations.

“In my view, his time has been a missed opportunity,” said Madi Jobarteh, a prominent Gambian human rights activist.

“What we have come to see is Barrow going against his own promises and adopting some practices of the former regime, not in terms of arbitrary arrests and enforced disappearances, but with the disfigurement of rule of law, lack of transparency and misuse of public resources.”

Barrow came to power as the head of an alliance of opposition parties formed to contest the 2016 election, which ended with Jammeh losing and eventually fleeing abroad. A political novice, Barrow had previously worked as a security guard in a department store in London while studying, before becoming a property tycoon on his return to The Gambia.

The alliance had agreed that if Barrow were to win, he would serve as a transitional president for three years before organising elections in which he would not stand.

However, the agreement was not legally binding, and instead of preparing to step down, Barrow has already begun to prepare for the 2021 election on the basis that The Gambia’s constitution allows for five-year presidential terms.

“Legal analysts are pointing to the constitution to argue that he can stay for five years,” said Abdoulaye Saine, a professor of political science at the United States-based Miami University.

“But there is also a moral argument which is centred on the fact that this agreement was signed by party leaders and is morally binding,” Saine, an expert on The Gambia, added.

“If he reneges on that promise why should anyone take him seriously in 2021?”

Momodou Sabally, a former head of the civil service and cabinet minister under Jammeh, said Barrow had pursued a more conciliatory tone than his predecessor on issues of foreign affairs.

“I think where he’s done well is in avoiding unnecessary confrontation with the international community. Gambians like that,” Sabally said. “The Jammeh’s administration’s boisterous foreign policy never resonated well with the average Gambian.”

Last week, meanwhile, The Gambia dominated international headlines after bringing a case against Myanmar at the International Court of Justice, accusing it of committing “genocide” against its mainly Muslim Rohingya inhabitants.

On the domestic front, the Truth, Reconciliation and Reparations Commission, which was set up to investigate Jammeh-era human rights abuses,  has won particular praise – though victims have criticised the release of some alleged perpetrators.

Despite apparent progress in some quarters, the death of 62 Gambians after a boat en route to Europe capsized off Mauritania on December 4 served as a reminder that economic hardships have not eased since Barrow came to power, experts say.

“The economy is in a shambles, to put it mildly,” said Miami University’s Saine. “Inflation is at a galloping pace, food prices – especially for the poor – are going through the roof. Water and electricity is expensive and there are lots of blackouts.”

Two days after the shipwreck, 192 Gambians were rescued by the Mauritanian coastguard in a separate incident.

They were just some of the tens of thousands of people to have left the West African country – where unemployment among the youth hovers above 40 percent – to pursue opportunities in Europe and elsewhere.

“That the numbers are increasing under Barrow means they haven’t put in place opportunities for young people which means the status quo remains,” Jobarteh said.

Amid the economic hardship, public services have been found wanting, according to observers, while the government continues to plough investment into defence, security and foreign affairs above education and health.

In August, The Gambia was heavily criticised by the US for its lack of fiscal transparency in a report which said that the government had off-budget accounts supporting military and intelligence spending that “were not subject to adequate oversight or audit”.

Barrow’s own transparency has also been called into question. He failed to disclose the value of gifts received and some see his constant travelling as taking advantage of the country’s generous travel allowance.

“The perception many Gambians have of Barrow is that he’s not doing much to reverse the country’s dire situation,” Saine said. 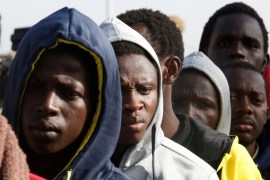 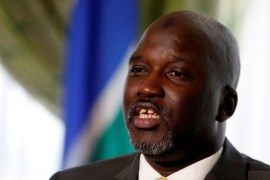 By filing a case against Myanmar’s treatment of Rohingya, Gambia has shown Africa’s potential to promote human rights.