Scores of slain soldiers have received military honours in Niger‘s capital, capping a week of grieving for the West African country.

Covered in the orange, white and green colours of the national flag, the bodies of 74 troops killed in two separate attacks were transported on Friday from Air Base 101, one of the country’s military hubs, to Niamey’s main cemetery.

Hours earlier, a group known as Islamic State in the Western Sahara Province (ISWAP), originally a branch of Boko Haram in Nigeria, claimed responsibility for Tuesday’s attack against a military garrison in Inates, a village near the border with Mali, that left 71 soldiers dead. Three others were killed in an attack on Monday in Agando.

For Abdoul Azizou though, this week’s attack did not come as a surprise.

“Since two years, we’ve been plunged into an asymmetric war with an enemy who profits largely from the lack of state presence in the north of Mali and frequently targets Niger, operating in an immense stretch of land, up to 150km (93 miles) south of our borders with Mali,” the analyst said. 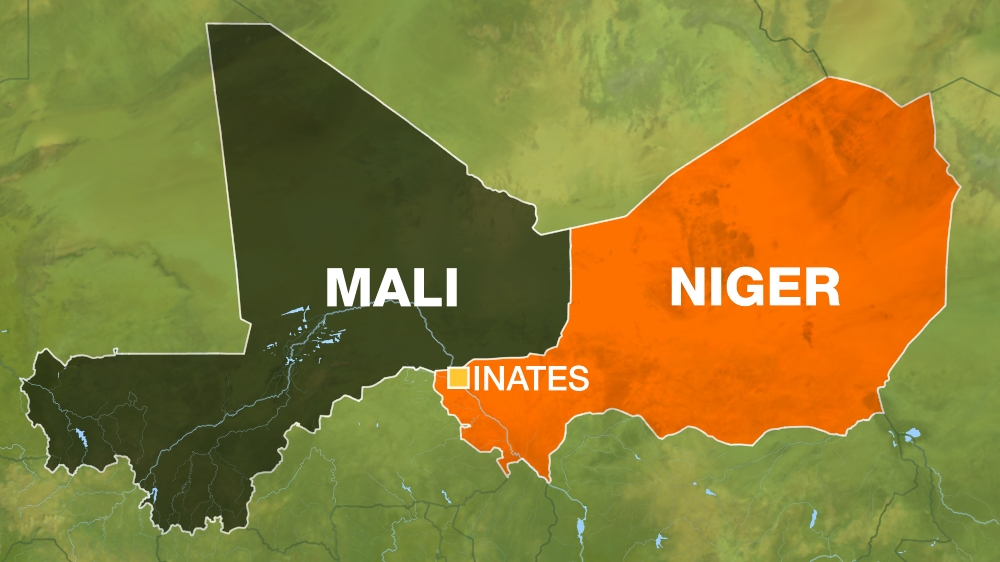 ‘Cut and paste from similar attacks’

Inates is located in an area where armed groups’ activity – mostly operating along the borders with Mali, Nigeria and Burkina Faso – has increased dramatically since early 2018.

According to a military source, the assault on the Inates military garrison was “a cut and paste from similar attacks” claimed by the Islamic State in the Greater Sahara (ISGS) in Mali.

Created in 2015 by Adnan Abu Walid al Sahrawi, ISGS orchestrates attacks from the Menaka and Gao regions in Mali, counting on the collaboration of local fighters in the Nigerien borderlands of Tillabery and Tahoua.

“In the north of the Tillabery region, where Inates lies, ISGS counts on local fighters cells that disappear among the population once an attack is done, so that when the military goes out for operations, they don’t find anyone,” Abdoul Azizou said.

Protected by a barely one-metre-high (3.3 feet) clay fence, the garrison’s outpost was attacked with heavy mortar shelling, minutes after a surveillance drone was seen flying over the base.

An ammunition warehouse and an oil tank exploded immediately, while attackers surrounded the military camp on three sides, moving on armoured cars.

Three hours of heavy fighting followed, until attackers fell back as reinforcements arrived from the Nigerien base of Ouallam.

Seventy-one soldiers were killed and 30 are missing, according to the government. ISWAP, which analysts believe is connected and hierarchically superior to ISGS, claimed to have killed 100 soldiers and took away 16 vehicles, weapons and other equipment.

According to a military source contacted by Al Jazeera, recent trends culminating in this week’s attacks in Inates and Agando expose a three-fold strategy by armed groups.

“First, they earned free passage across borders in a vast region, then they killed representatives of the state and now aim at offering a slippery sort of protection to local communities,” the source said.

While the first two phases have been achieved, with 13 local leaders murdered since January 2019, “we’re now on a crucial brink to achieve the third one,” the source said.

If fighters succeed, “the north of Tillaberi will become a new Adrar Des Ifoghas (an area used as a refuge for fighters in the early years of the conflict in Mali)”.

According to Amadou Moussa, an activist from the Fulani ethnic group, a pastoralist community seen as the main source of manpower for ISGS in the region of Tillaberi, “only a dialogue with these communities, that feel abandoned by central authorities, can defuse such darkened perspectives”.

Alessandra Morelli, who represents the United Nations High Commission for Refugees in Niger, said that “civilians live in constant fear of attacks, kidnappings, violence, and humanitarian access is desperately needed in this area bordering with Mali”.

Some 57,000 Malian refugees live in the western regions of Niger, concentrated in four camps, while about 80,000 Nigeriens have been displaced by violence in the same area since early 2018.

“Humanitarian needs in Niger mirror dramatic events in Mali and Burkina Faso,” Morelli said. “It’s a regional crisis that affects millions of people, and needs to be addressed in an urgent way.”

Issoufou summoned the leaders of the G5 Sahel countries – Chad, Burkina Faso, Mali and Mauritania, in addition to Niger – for an emergency meeting on the security situation, to be held on December 15 in Niamey, while a G5 Sahel-France summit, launched by President Emmanuel Macron and scheduled for the same day in France, was postponed until early 2020.