A massive fire broke out on Russia‘s only aircraft carrier as it underwent repairs in an Artic shipyard, Russian news agencies reported, wounding 11 service members.

Russia’s Northern Fleet officials on Thursday said the blaze on the ship, the Admiral Kuznetsov, has been contained, while authorities in Murmansk said 10 of those injured were hospitalised in intensive care units.

The Admiral Kuznetsov has been undergoing repairs for more than two years and suffered previous damage in October 2018 when a 70-tonne crane crashed onto its deck.

State news agency RIA Novosti quoted a source in the Zvezdochka shipyard as saying the fire broke out during welding operations.

More than 400 people were on board when the fire erupted, state news agency TASS quoted a Zvezdochka spokesman as saying.

News agency Interfax reported that the fire had spread over an area of about 600 square metres (6,500 square feet).

Launched in 1985, the Admiral Kuznetsov – the Russian navy’s flagship – has been undergoing its first major repairs since 1997.

The repairs were expected to be completed by the end of 2020, with the warship rejoining the navy in 2021.

The fire is the latest setback to repairs on the vessel. In October 2018, a crane collapsed on the carrier’s deck, injuring four people, and causing a mammoth floating dock holding the ship to sink.

Two years ago, the ship was deployed to the Mediterranean as part of Russia’s campaign in Syria. From there, it launched the first carrier-mounted attacks in Russian naval history.

It also stopped off the coast of Libya in January 2017 and took on board renegade military commander Khalifa Haftar, who Russia has reportedly backed in the country’s long-running civil conflict. 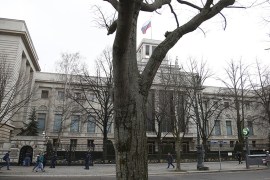 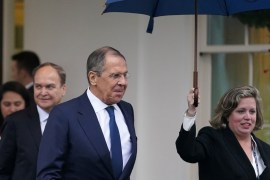 Trump warns Russia not to meddle in US elections: White House

However, Russian FM Lavrov denies US leader discussed election meddling with him during their Oval Office meeting. 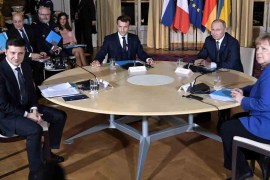 The leaders of Russia and Ukraine held nine hours of talks in a Paris summit brokered by France and Germany.