A film based on the life of Bangladesh’s first popular female surfer is facing calls to be banned, accused of “hurting” religious sentiments in the Muslim-majority South Asian nation.

Supreme Court lawyer Huzzatul Islam issued a legal notice to the filmmakers and filed a petition in the High Court demanding authorities revoke the censor certificate for the film No Dorai (“Not Afraid”) in Bangladesh where it is unusual for women to swim in public.

The film’s producer, Mahboob Rahman, said the High Court has asked the filmmakers to justify by next month why the censor certificate should not be withdrawn, adding they would fight moves to shut the movie down.

Released on November 29, the much anticipated No Dorai tells the story of a poor girl named Ayesha who falls in love with surfing and takes up the sport in defiance of a conservative society that often pushes girls to marry early.

No Dorai is the first film in Bangladesh to focus on female surfers and deal with poverty as well as discrimination against women in the country of 160 million.

Rahman said he was surprised by the reaction to the film.

“There is a group that wants women to stay indoors,” Rahman told the Thomson Reuters Foundation, adding that he had also received threats online.

“Some people are saying that Ayesha wears a bikini in the movie and that this is against our religion. There is no such scene … these people haven’t watched the movie.”

The row over the film started when Islam sent a legal notice to the filmmakers on December 4 calling for the movie to be banned and said some scenes in the movie “hurt religious sentiments”. He did not name specific scenes.

“We want the censor board to cancel the movie’s certificate. We want the movie to be withdrawn and we also want the filmmakers to apologise,” Islam told the Thomson Reuters Foundation.

Surfing is not a sport that is encouraged for women in Bangladesh, where more than half of girls end up getting married before they turn 18, according to the United Nations, even though child marriage is banned.

Rahman said he came up with the idea of a movie about surfing in Bangladesh when he met Nasima Akter, a female surfer from the southern beach town of Cox’s Bazar who received global media coverage after out-surfing her male peers.

Akter was made homeless at the age of seven and found hope in surfing in Cox’s Bazar, which boasts the world’s longest uninterrupted sandy beach.

She was featured in a documentary by US filmmaker Heather Kessinger, called The Most Fearless: An Unexpected Surf Story, that was released four years ago, when Akter was 18.

No Dorai, however, ends on a different note, with Ayesha fighting back to continue surfing.

“In Bangladesh and many places, women are oppressed and not allowed to do what they like … we gave a different ending and made the protagonist very strong so that she fights back and inspires more women,” said Rahman. 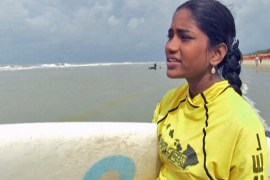 In deeply conservative Bangladesh, it is considered shameful for a woman to even go to the beach.