Thunberg, who turns 17 in January and who is known for her blunt, straightforward addresses to world leaders, has urged immediate action to address what she describes as the global climate crisis.

The teen, whose climate activism went viral in 2018, delivered a scathing address to the UN General Assembly at the Climate Action Summit in New York City in September. She had travelled for nearly 14 days across the Atlantic Ocean in a zero-emissions racing yacht to attend the conference.

“My message is that we will be watching you. This is all wrong,” Thunberg said in an emotional speech that appeared to move the audience at the UN General Assembly hall.

“I shouldn’t be up here. I should be back in school on the other side of the ocean,” she added. “You have come to us young people for hope. How dare you? You have stolen my childhood with empty words. Yet, I’m one of the lucky ones.”

Days before appearing before the UN, Thunberg joined protesters in Washington, DC, who decried US President Donald Trump’s decision to withdraw from the Paris Agreement – a worldwide pact to stem the rise in global temperatures – as well as the president’s rollback of environmental protections.

While in the US capital, Thunberg also testified before a Senate task force on climate change.

“I know you’re trying,” she told Democratic senators at the invitation-only forum, “but just not hard enough. Sorry.”

More recently, Thunberg arrived at the UN’s COP25 climate change conference in Spain, after launching a last-minute bid to find a low-emission way to travel across the Atlantic when the host country changed from protest-hit Chile. She eventually spent 36 days travelling by catamaran, electric car and train to attend the event.

“To those who are not here – we cannot afford any more days going by without real action being taken. We should not look past it and ignore things,” she said, addressing world leaders who did not attend the talks.

Earlier this year,Thunberg had been nominated for a Nobel peace prize, recognised for her mobilisation of students in her “Fridays for Future” weekly school strikes.

The movement officially began in August of 2018, after Thunberg spent three weeks sitting in front of the Swedish parliament demanding action on climate change during school days. Her actions, which she posted on social media, went viral and morphed into a weekly Friday protest.

The nomination came after the number of students taking part in the school strikes broke two million across 135 countries.

On Wednesday, Thurnberg, who had also been named one of the world’s most influential people by Time magazine in May, told the Associated Press news agency she was “very grateful” and “very honored” by the person of the year recognition.

She added: “It should be everyone in the Fridays for Future movement because what we have done, we have done together.”

Praise from rights and environmental groups

Anand Giridharadas, the Time Magazine editor at large, said that one of the most “powerful things” about Thunberg is that she “doesn’t believe in the ‘win-win'”

“She is telling us that real change is costly, real change requires giving things up, the loss of power and privilege, new systems, new ways of life,” Giridharadas tweeted shortly after the announcement.

The recognition garnered praise from rights groups and environmental organisations.

The National Resources Defence Council tweeted congratulations to Thunberg and “all the youth climate activists making change in communities across the world”.

We were honored to name you as our #AmbassadorOfConscience earlier this year and will never cease to be amazed by your relentless demonstration of youth-run activism.

While Amnesty International, which had previously named Thunberg an “ambassador of conscience” tweeted the group will “never ceased to be amazed” by Thunberg’s “relentless demonstration of youth-run activism”.

Former US Secretary of State Hillary Clinton said on Twitter she is “grateful for all she’s done to raise awareness of the climate crisis and her willingness to tell hard, motivating truths”.

Thunberg responds to critics, says her message to all politicians is the same: ‘Just listen and act on the science.’ 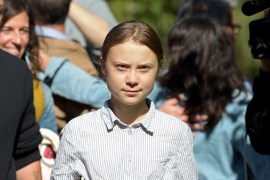 The teenager has become the figurehead of a global movement of climate justice activists. 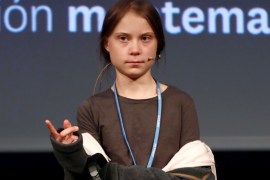