Police fired tear gas and pepper spray in Hong Kong on Sunday as thousands of protesters flooded into the streets after a rare lull in violence as residents chanted “revolution of our time” and “liberate Hong Kong”.

Pro-democracy demonstrators renewed pressure on the government by marching in three separate rallies across the city, with one of them showing “gratitude” for US support of the anti-government movement that has roiled the financial hub for nearly six months.

Hundreds of people, including many elderly residents, carried Amerian flags as they marched to the United States consulate to express gratitude for legislation aimed at protecting human rights in Hong Kong that US President Donald Trump signed into law last week.

Some donned Trump logo hats and T-shirts as protesters unfurled a banner depicting the US president standing astride a tank with a US flag behind him.

Trump this week signed into law congressional legislation that supported protesters in the China-ruled city, despite angry objections from Beijing.

“Thank you, President Trump, for your big gift to Hong Kong and God bless America,” shouted a speaker holding a microphone as he addressed a crowd at the start of the march.

Earlier on Sunday, hundreds of demonstrators, including many families with children, marched in protest against police use of tear gas.

Carrying yellow balloons and waving banners that read: “No tear gas, save our children,” the protesters streamed through the city’s central business district towards government headquarters on the main Hong Kong island.

There has been relative calm in Hong Kong for the past week but activists have pledged to maintain the momentum of the movement.

Anti-government protests have rocked the former British colony since June, at times forcing government offices, businesses, schools and even the international airport to shut down.

Al Jazeera’s Sarah Clarke, reporting from the third march on the Kowloon side, which started at the Star Ferry terminal and will end near the Polytechnic University, said: “This one is the anti-government one with a general message.

“It has been approved by police, but we have riot police the whole way along the route of this march monitoring things.

“Thousands of people are streaming … we have every generation – old and young – represented.

“The protesters are trying to bring the message back to their five key demands – political reform and independent investigation into the police conduct during these six months of demonstrations.”

Police have fired about 10,000 rounds of tear gas since June, the city’s Secretary for Security John Lee said last week.

Sunday’s marches came as a top Hong Kong official said the government was looking into setting up an independent committee to review the handling of the crisis, in which demonstrations have become increasingly violent.

Demonstrators in Hong Kong are angry at what they see as Chinese meddling in the freedoms promised to the former British colony when it returned to Chinese rule in 1997.

China denies interfering and says it is committed to the “one country, two systems” formula put in place at that time and has blamed foreign forces for fomenting unrest.

Further protests are planned through the week and a big test of support for the anti-government campaign is expected on December 8 with a rally planned by Civil Human Rights Front, the group that organised million-strong marches in June. 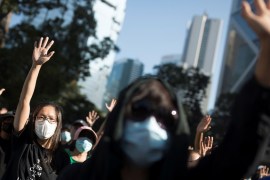 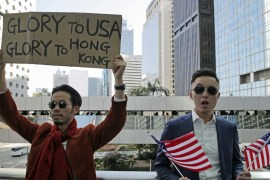 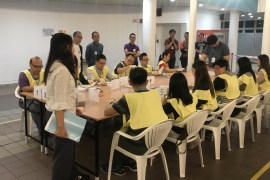