The Philippines evacuated 200,000 people in coastal and mountainous areas amid fears of flooding and landslides, and closed the country’s main international airport, as a powerful typhoon hit the Southeast Asian nation.

Typhoon Kammuri, the Philippines 20th typhoon this year, hit the main Luzon island just before midnight local time on Tuesday (16:00 GMT on Monday). The strengthening storm is locally referred to as Typhoon Tisoy.

Al Jazeera’s Jamela Alindogan was in Albay, about 12 hours southeast of Manila, and said it “felt like a full-blown war” as the storm hit.

Alindogan said the local airport had been closed and it was still too early to know how badly coastal villages and outlying areas had been affected.

The Philippine disaster agency said 200,000 people had been evacuated from dozens of provinces in southern Luzon as authorities raised the cyclone warning level for 35 provinces and told people in areas in the path of the Category-4-equivalent typhoon to be on alert for possible landslides, storm surges and floods triggered by heavy winds and rain.

The typhoon passed near the capital, Manila, around lunchtime on Tuesday, and officials said the city’s Ninoy Aquino International Airport would be closed from 11am to 11pm local time. Dozens of flights were cancelled or diverted and schools in affected provinces were closed.

Lovely Suarez, 48, spent all morning knocking on her neighbours’ doors in an area of Manila that had been classified a danger zone. Their homes are built on a spit of land that juts out from the beach leaving the community dangerously exposed to the high winds and torrential rain.

“Most of the people followed,” she said. “They started evacuating last night, starting with the children. But some are stubborn and won’t listen. They say they’re used to typhoons and have survived. They’ll survive this one.”

The typhoon struck as the Philippines hosts thousands of athletes from Southeast Asia for biennial regional games that opened on Saturday.

Organisers said windsurfing competitions had been postponed and other events would be delayed for safety if needed but there was no plan to extend the 11-day tournament.

Battered by about 20 typhoons each year, the Philippines is one of the most disaster-prone countries on Earth. The archipelago of more than 100 million people also lies in the so-called Pacific “Ring of Fire”, a seismically active region where earthquakes and volcanic eruptions are common.

With additional reporting from Ana Santos in Manila. 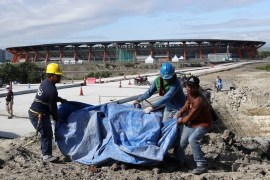 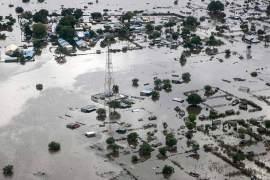 A photo round-up of some of this month’s major weather events, including floods in Kenya and fires in Australia and US.