Iran will start injecting uranium gas into hundreds of centrifuges at its Fordow facility in the latest step away from the crumbling nuclear deal with world powers since the United States withdrew from the landmark accord last year.

In a televised statement on Tuesday, Iranian President Hassan Rouhani said the 1,044 machines at the plant will be injected with the uranium gas starting on Wednesday.

“Gas will be injected into centrifuges at Fordow as part of part of our fourth step to reduce our nuclear commitments to the deal,” Rouhani said in a televised speech.

The move further complicates the chances of saving the nuclear deal, which European powers have called on Iran to respect.

“We want to find a way forward through constructive international dialogue but Iran needs to stand by the commitments it made and urgently return to full compliance.”

Under the nuclear deal signed in 2015 by Iran, the US, Britain, France, Germany, China and Russia, these centrifuges are supposed to spin without gas injection. Tehran has gradually reduced commitments made under the accord – including uranium stockpile and enrichment limits – since being hit with renewed US sanctions last year.

Rouhani gave his European partners another two-month deadline to protect Iran’s economy from crippling US sanctions.

“We can’t unilaterally accept that we completely fulfill our commitments and they don’t follow up on their commitments,” he said.

Let us all pause on this beautiful Tuesday morning and contemplate just how counterproductive the Iran maximum pressure campaign has been on the nuclear front.

Russia said on Tuesday it was concerned by Iran’s latest move, adding it would like the deal to remain in place.

“We are monitoring the development of the situation with concern,” President Vladimir Putin’s spokesman Dmitry Peskov told reporters. “We support the preservation of this deal.”

Iran has two vast enrichment sites at Natanz and Fordow. Much of Natanz is deep underground and Fordow is buried inside a mountain, which is widely believed to protect them from aerial bombardment. Before the deal, Iran used Fordow to enrich uranium to 20 percent fissile purity.

“This announcement will be taken very seriously by the European Union, Russia and China because of the sensitivity of Fordow and what it entails,” Aniseh Bassiri Tabrizi, a fellow at Royal United Services Institute, told Al Jazeera.

“So we will have to see if Iran went too far in trying to push the remaining parties, or if the JCPOA stays alive or not,” she added, referring to the deal’s formal title.

Rouhani, in his address, said all of the steps Iran has taken so far are reversible and Tehran will uphold all of its commitments under the deal when the remaining signatories do the same.

“We know their sensitivity with regard to Fordow. With regard to these centrifuges, we know. But at the same time when they uphold their commitments we will cut off the gas again … So it is possible to reverse this step,” the Iranian president said.

“We can’t unilaterally accept that we completely fulfil our commitments and they don’t follow up on their commitments.”

The process, he said, would be carried out under the “supervision” of the International Atomic Energy Agency, the United Nations’ nuclear watchdog monitoring Iran’s compliance with the nuclear deal. There was no immediate comment from the agency.

Al Jazeera’s Dorsa Jabbari, reporting from Tehran, said the injection of gas into centrifuges at Fordow, an underground facility near the city of Qom, was a “contentious” move.

“This is the only facility that can produce 20 percent uranium – the level at which Iran enriched uranium before the 2015 deal. And that has always been a point of contention with the international community – because going from 20 percent to the weapons-grade level of 90 percent is not a long stretch,” she said.

“Under the 2015 accord, this plant became a research facility, so it was no longer enriching uranium. But today’s announcement means the Fordow nuclear facility is becoming operational at a very small scale.”

The measure on Tuesday is the fourth announced by Iran since it began responding to Washington’s abandonment of the nuclear deal.

On Monday, a spokesman for Iran’s atomic agency announced it had doubled the number of advanced IR-6 centrifuges now in operation. Such centrifuges can produce enriched uranium 10 times faster than the first generation IR-1s allowed under the accord.

Meanwhile, UN nuclear inspectors reported in July that Iran had cranked up uranium enrichment to 4.5 percent purity, beyond the 3.67 percent set in the accord, and started amassing more low-enriched uranium than the 300-kilogramme stockpile limit set in the deal.

By scaling back its commitments, Iran further cuts into the one year that experts estimate it would need to have enough material for building a nuclear weapon – if it chose to pursue one.

Tabrizi said the rationale behind Iran’s behaviour is “clear”.

“It’s because they are not able to sell their oil or be connected to the international financial system. They’ve maintained there is no benefit to remaining in the deal if they cannot get the benefits of transactions with the global financial system,” she added.

“But six months after Iran first announced scaling back its commitments, there has been no change in the situation.”

Iran has repeatedly warned the European parties to the deal the agreement can only be rescued if they help it circumvent US sanctions on its banking and oil sectors. But European governments have struggled to come up with a mechanism that would allow foreign firms to continue to do business with Iran without incurring US penalties.

The European Union on Monday called on Iran to return to the deal, while the White House sanctioned members of Supreme Leader Ali Hosseini Khamenei’s inner circle as part of its maximalist campaign against Tehran.

US President Donald Trump abandoned the agreement – signed under his predecessor – saying he wanted to negotiate a new deal that also curbed Iran’s ballistic missiles programme and its support for armed groups in the region.

Tehran, however, says new talks are only possible if Washington lifts all the sanctions and returns to the nuclear deal.

The collapse of the landmark accord coincided with a tense summer of mysterious attacks on oil tankers in the Gulf and Saudi oil facilities that the US blamed on Iran. 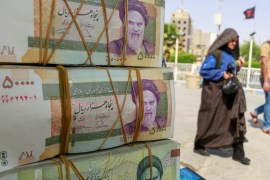 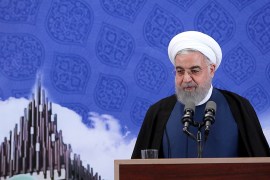 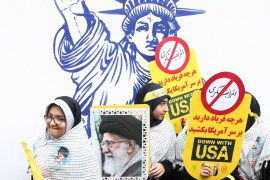 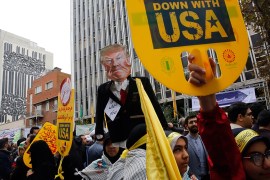