Bolivia’s government has accused its rivals of plotting deadly violence against it after an opposition figure vowed to overthrow leftist President Evo Morales and called for the military’s support.

Deadly unrest has gripped the South American country since Morales was named winner of the October 20 election, giving him a fourth term.

His opponents have branded the result a fraud and Carlos Mesa, who ran against Morales in the recent polls, has called for a new vote to be held.

“We believe… that the best solution to this crisis in the current circumstances is a new election, administered by an impartial new (electoral body) and with rigorous observation of the international community,” Mesa said on Sunday.

Late on Saturday, a conservative opposition leader in the eastern Santa Cruz region threatened to drive Morales out.

“He has 48 hours to step down, because at 7pm (23:00 GMT) on Monday, we are going to take decisive action right here and we are going to make sure that he goes,” Luis Fernando Camacho told a gathering of supporters.

He called on the military to “be on the side of the people”.

“They want people to be killed by the police and the military,” he said in a televised interview.

He told reporters the government had intelligence “indicating that a violent confrontation is being prepared” for Monday night near the presidential palace in La Paz.

Camacho did not specify what kind of action he had in mind. His supporters have previously taken over public buildings.

The military has so far stayed neutral in the electoral dispute but calling on it to intervene is a delicate move in Bolivia.

The country saw numerous military uprisings and dictatorships before civilian rule was established in 1982.

Morales is looking to remain in power until 2025 with a fourth term.

His election win was ratified by the Supreme Electoral Tribunal – but only after an abrupt and unexplained shift in the vote count in his favour.

The Organization of American States is carrying out an audit of the vote but the opposition has rejected that as a distraction to help Morales hold on to power.

Bolivia’s constitution limits a president to two successive terms. But the constitutional court authorised Morales to stand for a fourth mandate.

The court, like the election tribunal, is made up of members appointed by Morales’s Movement for Socialism.

The interior minister last week said two demonstrators had been killed in clashes. State authorities say 140 people have been hurt in the unrest.

Unrest has also erupted in recent weeks in other Latin American countries, including neighbouring Chile and Ecuador where protesters are angry at rising inequality. 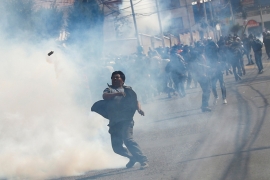 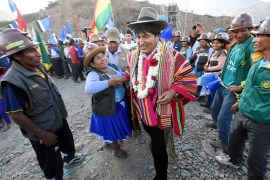 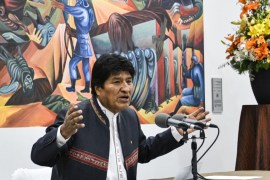