Vote counting was under way in Namibia on Thursday after polling ran on late into the night in a general election expected to loosen the ruling party’s hold on power.

Namibians went to the polls on Wednesday to elect a president and legislators after years of economic hardship and a recent corruption scandal that have stirred up resentment against the government.

While the party still basks in the legacy of the liberation struggle, Geingob is predicted to lose votes to a SWAPO member running as an independent candidate, ex-dentist Panduleni Itula.

The breakaway candidate is particularly popular among youth frustrated by the lack of jobs and too young to remember the SWAPO-lead war for independence.

The electoral commission has refused to say by when provisional results will be released.

But in the last election in 2014, provisional results were announced one day after voting.

By late Thursday morning, parliamentary results started appearing on the Electoral Commission of Namibia website – showing only four out of 121 constituencies.

Namibia was the first country in Africa to introduce electronic voting machines (EVMs) for its last general election in 2014.

As Namibia awaits the announcement of the 2019 general election results, the Ohangwena and Oshikoto regions are among the few regions that have completed the vote counting process. https://t.co/xag3plcyFc pic.twitter.com/W5H6iOk1st

The machines – opposed by opposition parties fearing the lack of paper could facilitate fraud – are meant to accelerate the voting and counting process.

Geingob won a sweeping 87 percent of the vote in 2014, while the runner-up and second-time runner McHenry Venaani racked up less than 5 percent.

Streets were quiet in Namibia’s capital Windhoek as residents slowly went back to their daily life.

Although election day was peaceful, the voting process was painfully sluggish and had people queueing outside for hours.

Polling stations remained opened late into the night to process voters that had arrived before the 9pm (19:00 GMT) cut-off time.

Several voters complained about the delays.

“Everything went well, but it’s only that most people … were complaining about the EVM,” said 52-year old bank employee Alfred Siukuta, buying a newspaper on his way to work.

“We are used to voting normally, crossing out (paper) and all those things,” he told AFP, adding that he waited all afternoon and only voted after 11pm (21:00 GMT).

Some like street vendor Eunike Ijonda gave up and went home.

“People voted until two o’clock, but me because I have small kids at home I can’t,” said the 38-year old, peeling onions behind her makeshift stall.

Ijonda said she stood in line for three hours without moving after one of the machines at her polling station broke down.

About 1.4 million of Namibia’s 2.45 million inhabitants were registered to vote. Half were under 37 and about a third born after 1990.

Average voter turnout for past elections is about 76 percent. 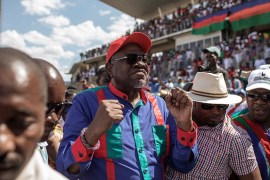 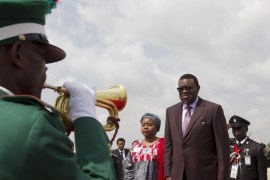 The former German colony is considering expropriating land since whites still own a majority of it. 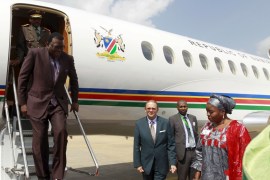