Beirut, Lebanon – Clashes broke out in towns and cities across Lebanon on Tuesday in the third night of confrontation between party supporters and demonstrators, which threatens to derail a peaceful protest movement.

The most symbolic was an hours-long standoff between residents of Ain al-Remmaneh, where Lebanon’s 15-year civil war began, and neighbouring Chyah.

Supporters of Hezbollah and the Amal Movement threw rocks and other objects across a road between the two areas that marked the dividing line between Christian East Beirut and Muslim West Beirut during the 1975-1990 war.

The men on the other side, many of whom support the Lebanese Forces party, retaliated before the army intervened to keep both sides apart.

But even after the confrontations died down, hundreds of men continued to gather in the dark alleyways of Ain al-Remmaneh, wielding batons, smoking cigarettes and inspecting cars.

A number gathered in an open doorway, watching developments just a couple of hundred metres away, discussing how to protect what they called “our area”.

“They attacked us, the residents of this place, knowing it is sensitive. This was a front line before. Do they want to repeat history?” Joseph, a 72-year-old holding a large club, told Al Jazeera.

Joseph pulled down his shirt to reveal an old bullet wound beneath his collar bone which he said he had sustained during his time as a wartime commander in the area.

“We don’t want to go back to that, but we need to protect our families. This is our border and they want to cross it, would anyone accept that,” he asked. “They are doing all this to try to destroy the revolution. We are from the ranks of the revolutionaries, but they are dragging us somewhere we don’t want to go.”

For more than 40 days, Lebanese across Lebanon’s religious and political divides have staged mass demonstrations demanding the civil war-era ruling class be held accountable for years of mismanagement and corruption.

But since Sunday, the largely peaceful protest movement has witnessed increasing violence and sectarian tensions, in incidents perpetrated largely by supporters of Hezbollah and Amal, which were part of the government of former Prime Minister Saad Hariri.

Supporters of those parties first attacked protesters on Beirut’s main Ring road on Sunday – the third such attack since the protests began.

A group of hundreds threw rocks at protesters and security forces and then entered back streets in the Christian-majority Monot area, setting fire to cars and vandalizing shops. All the while, they chanted: “Shia, Shia”.

On Monday night, large motorbike convoys of men roamed the streets of Beirut and headed to the Cola area, clashing with supporters of caretaker Prime Minister Hariri’s Future Movement. That night, they also attacked a protest camp in southern Tyre and on Tuesday another in Baalbeck.

Hezbollah allies have also been involved.

A convoy of supporters of the Free Patriotic Movement (FPM) drove through Bikfaya – the mountain stronghold of the rival Kataeb Party – on Tuesday night, honking horns and chanting slogans against one of the party’s main figures. Kataeb supporters blocked the road and clashes ensued, in which several people were injured, before the army was deployed in force.

On the other side of the road, Hezbollah and Amal supporters, many of whom are residents of the area, said the men in Ain al-Remmaneh had provoked them with curses. Few agreed to speak on the record. Many chanted slogans in support of Amal Movement leader Nabih Berri and shouted vulgarities across the street.

A number of peaceful protests also continued in Beirut and across Lebanon on Tuesday night even as tensions spiked in other parts of the country.

Hundreds turned out for an overnight demonstration at the Central Bank, while scores gathered in Tyre in solidarity with those who had been attacked by Hezbollah and Amal supporters the night before.

But many protesters fear that the increasing provocations by partisan supporters will undermine the anti-sectarian, anti-establishment values of the uprising and drive people back towards traditional alliances.

Future, the Lebanese Forces and the Druze Progressive Socialist Party have already aligned their rhetoric in support of the protesters, while Hezbollah, Amal, the FPM and their allies have been more opposed, echoing the rift between pro and anti-Damascus camps that emerged after Syria’s 2005 withdrawal from Lebanon.

Joseph was pessimistic about the future. “If it keeps going like this, we are heading towards ruin and strife,” he said.

Just after midnight, a group of men assaulted a burly man on a crossroads in Ain al-Remmaneh.

A number of them told Al Jazeera that the man they attacked had arrived to play poker at a small casino in the neighbourhood, but as he sat down, his phone screen lit up showing an Amal Flag. The men said they chased him out of the establishment, and down the street before beating him.

“Keep him prisoner,” one said, before a man who identified himself as belonging to an intelligence branch intervened and drove him away, across the de-facto front line towards Chyah.

As the group of men walked back towards their side, one told Al Jazeera: “We forced him to go back to his area and tell them we’re not p*****s. We are men.” 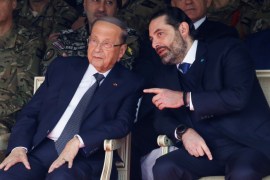 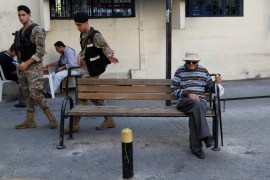 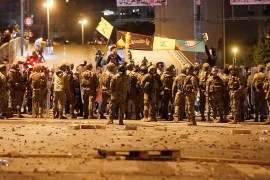 Second night of clashes in Lebanon amid anti-gov’t protests