Politicians in the Caribbean are said to be involved in a corrupt trade of diplomatic posts in exchange for money, an Al Jazeera investigation has revealed.

In Dominica, members of both main political parties appear willing to receive money in return for a political post, allegations they strongly deny.

Undercover filming reveals how former Dominican Prime Minister Oliver Seraphin offered to broker a secret deal to hand out an ambassadorship in Asia for fees totalling $470,000.

The revelation comes days ahead of a general election in Dominica on December 6, in which Prime Minister Roosevelt Skerrit is up for re-election.

Al Jazeera’s investigation also reveals Skerrit allegedly took hundreds of thousands of dollars for his 2014 election campaign from an Iranian businessman named Alireza Monfared in exchange for an ambassadorship for Dominica to Malaysia.

Besides money, Monfared also allegedly provided Skerrit with T-shirts and other paraphernalia for his 2014 campaign.

“Ali received his diplomatic passport through the hands of the prime minister personally when he came to Kuala Lumpur,” according to businessman Manoj Bullah, who was a witness to the deal.

“Without that money, Ali would not have gotten his diplomatic passport,” says Bullah.

One of the reasons Monfared wanted the passport, alleges Bullah, is that it would provide the Iranian with diplomatic immunity and prevent him from having to worry about the Iranian authorities.

Monfared was eventually arrested by his own government and in early November 2019 sentenced to 20 years’ imprisonment for stealing over a billion dollars in oil revenues.

Oliver Seraphin later denied ever discussing the proposal to purchase a diplomatic passport with Skerrit, claiming he was speaking without authority and name-dropping to impress.

The investigation reveals another money for passports scheme in Grenada, where an investment scheme is linked to the offer of an ambassadorship.

According to US businessman Leo Ford, one of his partners in the scheme was offered a diplomatic role in return for kickbacks on future government projects. This is denied by the Grenadian government and former business partner, who says he is the subject of a personal vendetta by Ford.

The case echoes the scandal of Eric Resteiner, a US conman, who claimed he handed half a million dollars in cash to Grenada’s Prime Minister Keith Mitchell as part payment for being appointed Ambassador at Large. Mitchell says he only received $15,000 for travel expenses.

The 18-month investigation also looks at how dozens of wealthy international businessmen have been made ambassadors by several Caribbean states to represent them in countries around the world and at the United Nations.

Although there is no evidence of wrongdoing on their part or payment for their positions, the ambassadorships do not conform to the United Nations’ own convention on who should be a diplomat.

Have a tip for Al Jazeera that should be investigated? Find out how to get in touch with us on our Tips page.

According to the 1961 Vienna Convention, ambassadors should normally be citizens of the country and not engaged in professional activity beyond their full-time diplomatic role in the countries they are appointed to.

In many of the cases Al Jazeera examined, the people involved were not citizens of the country they represented and they were still involved in other activities, against the UN’s rules.

Diplomats for Sale can be watched online here and will be on Al Jazeera:

The Diplomats for Sale podcast, released every Monday for the next four weeks, can be found here: 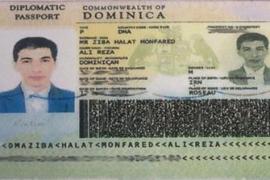 The first of a four-part series of a new podcast by Al Jazeera’s Investigative Unit.