Pope Francis wrapped up an often sombre trip to Japan on Tuesday that focused on the nuclear industry and his long-held opposition to atomic weapons.

Before leaving Tokyo, Francis celebrated morning Mass in the chapel of the Jesuit-run Sophia University and visited retired and sick priests before delivering a speech on Jesuit education in the final event of his week-long visit to Asia.

The emotional centrepiece of the pope’s Japan trip was a sombre visit to Hiroshima and Nagasaki, the only two cities to have been targeted by nuclear weapons, in attacks that killed at least 140,000 and 74,000 people in each city.

He prayed silently in the driving rain at memorials to the dead and heard harrowing testimony from some of the dwindling group of survivors.

Francis launched a powerful diatribe against both the use and possession of nuclear weapons, calling it a “crime” and describing the arms industry as an “affront crying out to Heaven”.

He comforted survivors, many of whom broke down in tears on meeting the pontiff, who recalled the “unspeakable horror” they suffered when the bombs were dropped.

“Here, in an incandescent burst of lightning and fire, so many men and women, so many dreams and hopes, disappeared, leaving behind only shadows and silence,” said the pope at the Peace Memorial in Hiroshima.

“In barely an instant, everything was devoured by a black hole of destruction and death.”

The 82-year-old later took his anti-nuclear message to Shinzo Abe, urging the Japanese prime minister and other world leaders to “promote every means of dissuasion” to ensure such a nuclear catastrophe never happens again.

The pope also met survivors of Japan’s “triple disaster”, the 2011 earthquake, tsunami and meltdown of the Fukushima nuclear plant that left around 18,500 people dead or missing.

He stopped just short of calling for an end to nuclear power, noting that Japanese bishops had appealed for the abolition of atomic power plants in the wake of Fukushima.

He also stressed that the rush of aid to the victims needed to be maintained, even eight years after the disaster, with some 50,000 people still in temporary housing.

Although the tone of the visit was sombre, there were some lighter moments, especially during an address to young people in Tokyo, where the pontiff made several rare departures from his prepared remarks, ad-libbing and joking with the crowd.

At one point during his lengthy speech, he asked them if they were getting bored and whether he should continue and at the end, he donned a colourful Japanese shirt over his white robes and gave a cheery thumbs-up.

Francis has long hankered after a trip to Japan, ever since he was a young missionary and he wasted no opportunity to voice his delight in fulfilling his dream.

He tackled many issues prevalent in modern Japan, including harassment, loneliness and an over-reliance on technology.

There are only 440,000 Japanese Catholics but the pontiff received a rock-star welcome at a packed Tokyo Dome baseball stadium where he greeted the crowds, kissed a steady stream of babies and celebrated Mass.

The four-day Japan trip came after a visit to Thailand, also a country with only a small proportion of Catholics.

In Thailand, he preached religious tolerance and warned young people against the pitfalls of technology, cautioned them that the distractions of modern life would leave them “empty, weary, alone and disenchanted”. 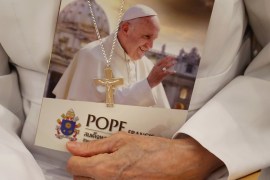 ‘Bonds of friendship’: Pope Francis heads to Thailand and Japan 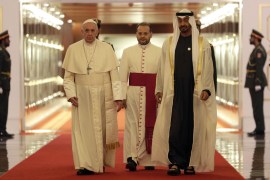 On a three-day visit, Pope Francis will promote a dialogue based on tolerance and peace with the Muslim world. 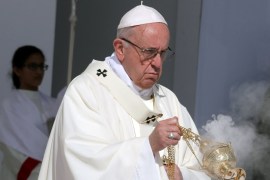 The papal admission followed an outcry last week from the Vatican’s women’s magazine over the sexual abuse of nuns.