Venice has been hit by further high water levels after weeks of flooding brought the lagoon city virtually to its knees.

Tourists and Venetians were forced to wade through the high waters yet again after weeks of rain and wind caused further flooding across the city.

With four tides above 140cm (4.6 feet) since November 11, this is the worst month for high tides in Venice since 1872 when official statistics were first produced.

The UNESCO world heritage city is home to 50,000 people and gets around 36 million visitors every year.

Further west on the other side of Italy, a portion of a motorway bridge linking Savona to Turin collapsed on Sunday.

Fire service personnel inspected the bridge on the A6 highway near Savona, after huge chunks of concrete plummeted to the ground due to a landslide.

According to a first inspection, local authorities said that there were no confirmed reports of fatalities or injuries in the area but firefighters were checking the area by helicopter.

Governor of the Liguria region, Giovanni Toti, asked residents to remain in their houses as much of Italy has been pummelled by torrential rains in recent days, with widespread flooding, especially in the northern regions.

The worst of the heavy rain is now clearing away to the southeast, moving across Greece and heading towards western Turkey. There will be further showers across Italy later in the week but they will not be anywhere near as heavy or prolonged. 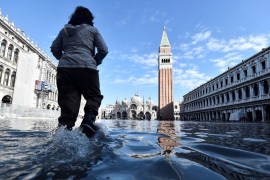 Move to shutter iconic square in flood-ravaged Venice comes after Italy declares state of emergency over the crisis. 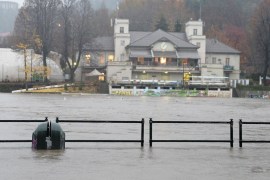 Torrential downpours causing rivers to overflow, forcing thousands of Italians from their homes in Liguria and Piedmont.