Democratic candidates won 86 percent of the 452 seats in district council elections in the semi-autonomous city on Sunday – a vote viewed as a test for the Hong Kong leadership after half a year of often-violent demonstrations against Beijing’s influence.

“The pressure on the government is tremendous and public opinion unambiguous,” Ma Ngok, a political scientist at the Chinese University of Hong Kong, told Al Jazeera.

“The government had counted on a reversal of public opinion that didn’t come. So, the momentum of the protest movement will no doubt continue,” he said.

Since early June, Hong Kong has been rocked by protests sparked by a bill that would have allowed people to be extradited to mainland China to stand trial.

Although the contentious bill was formally withdrawn last month, the protesters continue to demand an independent inquiry into alleged police brutality, amnesty for more than 1,000 people charged with offences during the demonstrations, and full democracy to elect the legislature and chief executive.

Hong Kong’s embattled Chief Executive Carrie Lam has not made a public appearance since casting her vote on Sunday, but issued a statement after the election results were announced on Monday.

“The government will listen to the opinions of members of the public humbly and seriously reflect,” said Lam.

Starry Lee, leader of the biggest pro-Beijing party who narrowly defeated her challenger, also called for reflection by the city’s administration.

“We hope the government can deeply reflect upon and examine its own shortcomings in handling the bill and restoring order to society,” Lee said.

All told, the pan-democratic camp and its allies dominated 17 of the 18 districts up for election and swept up nearly 400 of the 452 seats, an almost 30 percent rise since the 2014 vote.

The voter turnout of 71 percent – a record for any election since the territory returned to Chinese sovereignty in 1997 – dealt a blow to the government, not the least because it had failed to quell the protests by force.

“The overwhelming majority that voted against the government shatters its claim to any legitimacy,” Ma said.

In Hong Kong, district councils evolved from colonial-era local advisory boards to introduce elected representatives to the legislature. They are the only elections in the city that offer any form of truly democratic rule.

The defeat of its incumbents will cost pro-Beijing parties several legislative seats in next year’s election.

Given district councillors account for 10 percent of the total 1,200 electors for the chief executive, the democratic sweep gives the camp a little more sway in an electorate still stacked with mostly pro-Beijing loyalists.

More importantly, however, Sunday’s election was heralded as the closest thing to a referendum because it tapped into the constituency on the grassroots level.

While past council elections were mostly about hyper-local issues, many candidates this year openly campaigned over the issues being raised by the protesters – and won.

Riding the momentum of their triumph, about 100 newly-elected district councillors – to be sworn in on New Year’s Day – descended on the city’s Polytechnic University, where a few dozen protesters faced a police lockdown for eight days.

Galvanised by months of protests, the number of registered voters aged between 18 and 35 in Hong Kong spiked by more than 12 percent, with a record 4.1 million people now on the electoral rolls.

The election also saw many young faces joining the fray, casting aside the belief popular among the older generation that politics is an unworthy and even corrupt pursuit. Their victory disrupts district councils long dominated by local figureheads and old-time politicians.

The last time the democrats performed well was in 2003 when they rode the public discontent over a controversial sedition bill. But the tide turned in the next two elections.

“This time it will have a more lasting effect given the sheer anger towards the government,” political commentator Ching Cheong told Al Jazeera.

“Back then, the government was less hell-bent on going against public opinion. Now, their arrogance of power clearly shows.”

The landslide victory even took the winning democrats by surprise.

Vows mere made in online forums about running naked in the park and plunging into the harbour if certain incumbents lost. Political observers had also predicted a democratic takeover of only half the seats.

“We were surprised by the turnout and the margin,” said Debby Chan, 29, one of the winning candidates from a suburban district long dominated by conservatives and never won by the democrats.

Meanwhile, China has been guarded in its response.

Ching, however, said Beijing will read the election results as an act of “blatant resistance” against the Hong Kong government.

“They will only solidify their mistrust of Hong Kong,” he said. 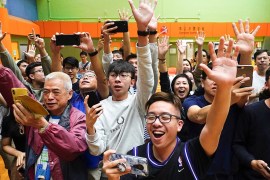 Local elections were seen as major test for the pro-Beijing government after nearly half a year of demonstrations. 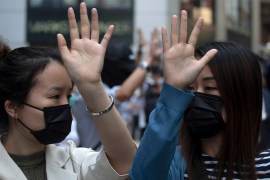 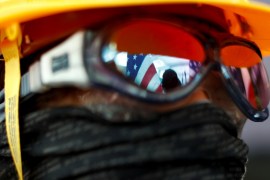