Former Namibian Minister of Fisheries and Marine Resources, Bernhard Esau, has been arrested following allegations of corruption and money laundering in the Namibian fishing industry.

Esau’s arrest on Saturday came in the wake of a joint investigation by Al Jazeera’s Investigative Unit, the Icelandic State Broadcaster RUV, and the Icelandic magazine Stundin based on leaked documents provided by the whistle-blowing group, WikiLeaks.

Al Jazeera’s investigation exposed the roles of well-connected Namibians who facilitated Samherji’s entry into the industry, in part based on the “Fishrot” archive released by WikiLeaks.

Shortly after the release of the archive, Esau and Shanghala resigned from their positions as ministers.

The two were accused of receiving bribes in return for giving Samherji, one of Iceland’s largest fishing companies, preferential access to Namibia‘s rich fishing grounds.

During his time as the minister of fisheries and marine resources, Esau developed close ties with Samherji, allocating it a significant portion of Namibia’s fishing quota.

Whistle-blower Stefansson alleged that this preferential access to fishing quotas was given in return for “bribes” paid to Esau, Shanghala, and their associates, James Hatuikulipi and Tamson Hatuikulipi.

According to the leaked documents, Samherji made payments from 2012 onwards to businesses associated with Shanghala worth close to $10m.

In return, the well-connected politicians appear to have fixed a bilateral fishing agreement with neighbouring Angola in order to provide Samherji with greater access to the Namibian fishing quotas.

Samherji is one of Iceland‘s largest fishing conglomerates with an annual turnover of more than $700m. The company sells its fish to supermarket chains such as Marks and Spencer, Carrefour, Tesco and Sainsbury’s.

In a statement, Samherji said it took the allegations seriously and solicited the aid of an international law firm to investigate.

“We are deeply shocked that Johannes Stefansson not only admits being involved in illegal activities, he is now also making allegations against colleagues. This is not how we do business. This is not Samherji,” Samherji CEO Thorsteinn Mar Baldvinsson was quoted as saying.

In a press release, Namibian President Hage Geingob thanked Esau and Shanghala for their “patriotism and contribution to the work of government”.

Following his resignation, Esau denied allegations of corruption and said “no one has presented [him] with any evidence of monies or favours that Bernhard Esau received” in exchange for “duties as a minister”.

Shanghala had a swift ascent in Namibian politics, from being the chairman of the Law Reform and Development Commission to be the country’s attorney general until he became the justice minister.

When Shanghala was first confronted with evidence against him, he told Al Jazeera: “I have no recollection of money coming from any relationship with Samherji.”

James Hatuikulipi denied all allegations of bribery. He said he was engaged in “private consultancy” for Samherji, and that payments made to him were lawful and “submitted to the relevant statutory bodies”. He added that he had “no control over” the bilateral agreement between Namibia and Angola, and was “not a party to any conspiracy”.

Tamson Hatuikulipi denied that all the money he received from Samherji were bribes. He said his “consultancy fees” were paid in return for introductions he made. He claimed, “All my books are up to date, and all relevant invoices are traceable.”

Al Jazeera’s investigation, Anatomy of a Bribe, will release on December 1. 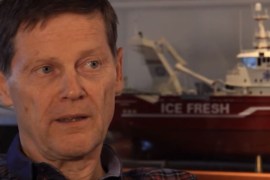 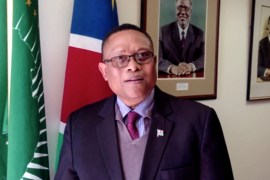 Bernhard Esau and Sacky Shanghala are accused of receiving bribes in return for preferential access to fishing grounds.