Demonstrators in Colombia’s capital have picketed the home of President Ivan Duque, defying a curfew hours after thousands protested against the government’s policies despite pledges of social reforms.

The renewed demonstrations on Friday came a day after hundreds of thousands of people marched in Bogota and other big cities, as the mass anti-government rallies that have shaken parts of Latin America spread to Colombia. Police said they were investigating the deaths of three people killed during the nationwide protests against the Colombian government’s economic, social and security policies.

On Friday, Duque said in a televised statement that starting next week he would launch “a national conversation to strengthen the current social policy agenda, working in a united way with medium and long-term vision, which will allow us to close the social gaps”.

He added: “This conversation will take place regionally with all the social and political sectors. I will use electronic media and participatory mechanisms … so that we can all build a meaningful path of reform.”

Duque also said he had asked Bogota’s mayor to impose a night-time curfew starting at 9pm (02:00GMT) in order “to guarantee the safety of all Bogota citizens”.

Some people were taking advantage of the protests to “sow chaos”, Duque said, while posts on social media said neighbours were organising to protect homes from looters.

The president said he was stepping up the police presence and ordering the “deployment of joint patrols of police and army in the most critical places”.

But that did not stop hundreds of people from showing up outside Duque’s house in Bogota, singing the national anthem while banging pots and pans in a form of protest that is common in parts of Latin America. The protesters dispersed peacefully about one hour after the 9pm (02:00 GMT on Saturday) curfew began, AFP news agency reported.

Earlier in the day, thousands had gathered in Bogota’s Bolivar Plaza for a renewed anti-government protest. The recent demonstrations have brought together protesters from nearly all sectors of society, with qualms ranging from recently proposed labour reform and an uptick in the number of killings of indigenous and social leaders to structural problems and corruption that have been part of Colombia for generations.

“We are here to keep protesting against the Duque government,” said 25-year-old art student Katheryn Martinez, as she clanged a pot with a fork accompanied by her father Arturo, 55.

The crowd, which included families and elderly people, was abruptly dispersed by tear gas, sending protesters running up the steep narrow streets of the historic district, Reuters news agency reported.

Some protesters regrouped at nearby intersections and continued chanting, while people in other neighbourhoods gathered temporarily blocking some roads.

The demonstrations, energised by recent examples in Ecuador, Chile and Bolivia, have brought the popularity of the president and his ruling party to their weakest point since taking office 15 months ago.

Separately on Friday, authorities said three officers were killed and seven other people were injured after an attack on a police station in the town of Santander de Quilichao in the southwestern province of Cauca, known as a hotspot for drug trafficking and violence.

“It was an attack on the police station with cylinders placed on a ramp that sadly leaves us three dead and seven wounded at the moment,” said Jaime Asprilla, city secretary, adding that the attack was not related to ongoing protests.

Police were expected to hold a news conference on Saturday morning. 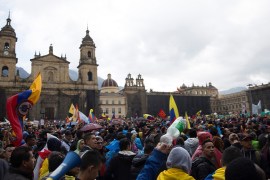 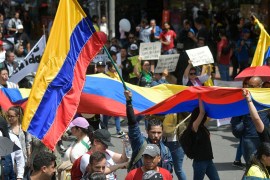 Organisers of Thursday’s strike that brought out indigenous groups, students, labour unions call for a repeat on Monday.