US President Donald Trump said on Friday he wants a trial in the United States Senate, suggesting he would be vindicated.

The US president said, however, he did not think the House of Representatives would impeach him.

“I think it’s very hard for them to impeach you if they have absolutely nothing,” Trump said.

Trump’s comments come after two weeks of public hearings with 12 witnesses in the impeachment inquiry.

The Democratic-led House is investigating whether Trump abused his power of office by pushing Ukraine to investigate a political rival.

The inquiry is centred on a July 25 phone call between Trump and Ukrainian President Volodymyr Zelenskyy in which the US leader asks his counterpart to launch an investigation into former US Vice President Joe Biden and his son, Hunter, who had served on a board of a Ukrainian gas company. Biden is also a 2020 Democratic presidential frontrunner.

Testimony revealed that the administration was also pushing for an investigation into a debunked conspiracy theory that it was Ukraine, not Russia, that meddled in the 2016 US presidential election.

At the time of the July 25 call, the Trump administration was withholding nearly $400m in military aid to Ukraine, prompting allegations Trump was using the money to get his desired investigations. The money was eventually released.

There was been no evidence of wrongdoing by the Bidens. Trump has said he has done nothing wrong, labelling the impeachment investigation a “witch-hunt”.

Trump lashes out at witnesses

On Friday, Trump accused two witnesses of lying during the marathon public hearings.

The Republican president took issue with testimony on Thursday by David Holmes, a US embassy official in Ukraine. Holmes said under oath that at a Kyiv restaurant he overheard a July 26 cellphone conversation in which Trump loudly pressed Gordon Sondland, the US ambassador to the European Union, for details on whether Ukraine would carry out politically motivated investigations the president was seeking.

“I guarantee you that never took place,” Trump told Fox and Friends.

“That was a total phony deal,” he added.

Trump appointed Sondland to the envoy post after the wealthy Oregon hotelier donated $1m to his inaugural committee. While Sondland in testimony described an easy-going relationship between the two, Trump said on Friday he had spoken with him “a few times”, adding, “I hardly know him, OK?”

Sondland offered a bombshell testimony on Wednesday, saying he believed there was “quid pro quo” (Latin for “something for something”) and that he was working with Trump’s lawyer, Rudy Giuliani at the “directions of the president”.

“I know that members of this committee have frequently framed these complicated issues in the form of a simple question: Was there a ‘quid pro quo?’ As I testified previously, with regard to the requested White House call and White House meeting, the answer is yes,” Sondland told the House Intelligence Committee.

He added that although Trump never directly told him that he wanted Ukraine to carry out investigations of the Bidens and 2016 election, he said Giuliani’s instructions “reflected President Trump’s desires and requirements”.

A key question in the impeachment inquiry has been why Trump used his personal lawyer in such a role and not the usual government channels. During the hearings, current and former White House officials and diplomats, including Sondland, voiced alarm at Giuliani’s activities such as trying to push Ukraine to carry out two investigations that could harm Trump’s political adversaries.

Trump called Ukraine corrupt and said Giuliani was the right person for the job.

“He’s like an iconic figure in this country for two reasons. He was the greatest mayor in the history of New York and he was the greatest crime fighter probably in the last 50 years,” Trump said on Friday. Giuliani previously served as the mayor of the largest US city and as a federal prosecutor.

Trump also repeated his assertion that Ukrainians might have hacked the Democratic National Committee’s network in 2016 and framed Russia for the crime, a theory his own advisers have dismissed.

“They gave the server to CrowdStrike, which is a company owned by a very wealthy Ukrainian,” Trump said. “I still want to see that server. The FBI has never gotten that server. That’s a big part of this whole thing.”

One version of the debunked theory holds that CrowdStrike is owned by a wealthy Ukrainian. In fact, company cofounder Dmitri Alperovitch is a Russian-born US citizen who immigrated as a child and graduated from the Georgia Institute of Technology.

The president repeated his claim one day after Fiona Hill, a former Russia adviser on the White House National Security Council, admonished Republicans for pushing unsubstantiated conspiracy theories about Ukrainian interference in the 2016 presidential election.

“Based on questions and statements I have heard, some of you on this committee appear to believe that Russia and its security services did not conduct a campaign against our country and that perhaps, somehow, for some reason, Ukraine did,” Hill testified before the House impeachment inquiry panel. “This is a fictional narrative that has been perpetrated and propagated by the Russian security services themselves.”

The Democrat-led inquiry may pave the way for the Democratic-led House to approve articles of impeachment – formal charges – against Trump.

That would lead to a trial in the Senate on whether to convict Trump of those charges and remove him from office. Republicans control the Senate and have shown little support for removing Trump.

House Speaker Nancy Pelosi said on Thursday that there is clear evidence that Trump has used his office for his personal gain. She said doing that has “undermined the national security of the United States”.

But Republicans have focused on the fact that no witness had personally said Trump directly conditioned the release of the military assistance to Ukraine on the announcement of his desired investigation.

“I have not heard evidence proving the president committed bribery or extortion,” said Representative Will Hurd, a moderate Republican from Texas who is retiring from Congress next year and would be a bellwether for any signs of weakness in Republican support for the president. Like some other Republicans, he made clear he found Trump’s actions “inappropriate” – just not impeachable.

Democrats now face the prospect of a House impeachment vote split along party lines. That would mirror public polling, which shows Americans divided over whether Trump should be impeached for his dealings with Ukraine and removed from office.

They must first decide whether to begin drafting articles of impeachment based on what has been revealed to this point or to launch a long-shot bid for testimony from additional witnesses who could provide more direct evidence of Trump’s actions.

There are still some officials who would likely be able to fill in some of the blanks. Democrats have requested testimony from acting White House Chief of Staff Mick Mulvaney and former National Security Advisor John Bolton, men who spent hours alongside Trump in the West Wing and whose names popped up repeatedly in the recollections of other officials.

Yet it appears unlikely that Bolton and Mulvaney will tell their stories to Congress. Citing executive privilege, both men have filed court cases to determine if they must appear. Pelosi said Thursday that she didn’t want the next steps in the inquiry to be “at the mercy of a court”. 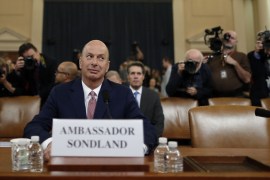