Baghdad, Iraq – Thousands of Iraqis have gathered for another day of protests in Baghdad’s Tahrir Square, with many denouncing a meeting earlier this week between Iraq‘s Prime Minister Adel Abdul Mahdi and the heads of the country’s largest tribes.

As protesters in the capital’s roundabout listened to the sermon of Iraq’s top Shia leader Ayatollah Ali al-Sistani on Friday, others screamed “traitors” and read poetry using loudspeakers to condemn the tribal leaders’ meeting with the embattled prime minister.

Abdul Mahdi had invited tribal leaders from across the country to a meeting in Baghdad on Wednesday in an attempt to “find solutions to the ongoing unrest across Iraq” amid an intensifying wave of anti-government protests.

But Tahrir’s protesters said the tribal leaders’ attendance of the meeting was a show of support for Abdul Mahdi and an act of treason in their eyes.

“What about the martyrs and those who have been injured? How could they forget about them and sit around the same table with the government?” asked Riyadh, a 50-year-old labourer from Baghdad.

“We condemn all the tribes that took part in that meeting. All they have done is just mock the martyrs and what they fell for,” he added.

On Thursday, local sources told Al Jazeera that protesters in the Iraqi province of Dhil Qar, angry over the meeting, set fire to the tribal affairs office at a police station in Nasiriyah.

At least 325 people have been killed and 15,000 others injured since protests in Baghdad and Iraq’s mainly Shia south began in early October to demand basic services, employment opportunities and an end to corruption.

Despite the losses and the government’s attempts to quell the protests, demonstrators say they will remain in Tahrir until they unseat the government and dismantle a sectarian system that has been in place since the US-led invasion of Iraq in 2003.

“We will keep coming to the square until our demands are met. Abdul Mahdi can meet tribal leaders if he wants, but that won’t convince people to leave,” Abu Hazim, a 65-year-old pensioner, told Al Jazeera.

“If they were real tribesmen, they would have never taken part in this scam,” he added.

According to the statement circulated over social media, the tribal leaders presented Abdul Mahdi with a list of 13 demands, including speedy elections, changes to the constitution and new electoral law.

Yet, several tribes from the holy city of Karbala refused to accept Abdul Mahdi’s invitation to attend the meeting, saying they stood with the protesters and Iraq’s top Shia leader, al-Sistani, who continues to support the protesters.

“If the government refuses to respond to the demands of the protesters and that of al-Sistani, we will boycott it and reject any form of communication as a show of support,” said a tribal leader in a televised statement ahead of the meeting on Wednesday.

‘Reforms the only way’

During his Friday sermon, al-Sistani called on the politicians to speed up electoral law reforms, adding that such changes would be the only way to resolve the weeks-long crisis across Iraq.

“We affirm the importance of speeding up the passing of the electoral law and the electoral commission law because this represents the country is moving past the big crisis,” his representative said during the Friday sermon in the holy city of Karbala.

Al-Sistani, who has a deep influence over public opinion across Iraq, previously blamed the Iraqi government and the security forces for “bloodshed”, denouncing their use of force against the protesters during the past weeks.

The casualties took place during fierce clashes between the demonstrators and security forces, leading to one death being caused by bullets and the other by a tear gas canister launched directly at the head, Reuters reported.

The deaths followed Thursday’s violence which saw the death of seven people and at least 78 others wounded when Iraqi forces shot live fire and tear gas canisters at the demonstrators in Baghdad.

The protesters also rejected on Friday a move by Iraq’s major political blocs to grant Abdul Mahdi a period of 45 days to implement reforms and meet the demands of the protesters.

“The government and political blocs think that we will get fed up and leave,” said Hamida Abu al-Jasim, a 45-year-old housewife who came from Karbala to join the protests.

“We know this is only a tactic to get the winter cold to pinch us, but we won’t budge and none of their tactics will keep us at home,” she added.

In a meeting attended by President Barham Salih on Wednesday, 12 parliamentary blocs agreed to give Abdul Mahdi more time to resolve the continuing crisis before withdrawing their confidence and calling for early elections.

But like Abu al-Jasim, 19-year-old dental student Sajjad told Al Jazeera that the 45-day grant was a “useless move”, making him only more adamant to stay in Tahrir.

“We will stay until the end, until the government leaves and responds to our demands.” 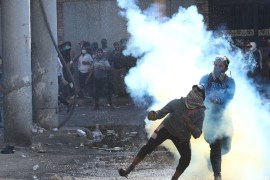 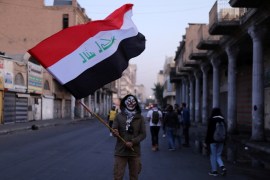 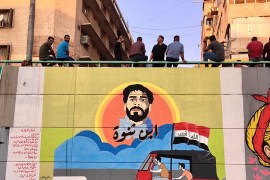