Iran began restoring internet access in the capital and a number of provinces after a five-day nationwide shutdown meant to help stifle deadly protests over fuel-price hikes.

“The internet is being gradually restored in the country,” the semi-official news agency Fars reported, quoting unidentified “informed sources”.

The National Security Council that ordered the shutdown approved reactivating the internet in “some areas”, it said.

According to news reports, fixed-line internet was restored in Hormozgan, Kermanshah, Arak, Mashhad, Qom, Tabriz, Hamadan and Bushehr provinces, as well as parts of Tehran.

“We again have internet as of an hour ago,” a retired engineer, who declined to be named, said by telephone from the capital.

Iran was rocked by nationwide protests sparked by growing anger and frustration after authorities rolled out a petrol-rationing scheme and slashed subsidies in a move that sent prices soaring by 50 percent.

A top cyberspace security official in Iran told journalists on Thursday he believed the country’s internet would be fully turned on “within the next two days”.

Abolhassan Firouzabadi, secretary of the Supreme Cyberspace Council, said the organisation discussed the matter at a meeting.

“We hope conditions will improve soon so that this unwanted measure is stopped and everyone can have access to the internet again,” said Firouzabadi.

“Some businesses have lost profits as a result of cutting off the internet and a decision will be made on compensating for their losses after the current situation is over.”

He also called for the creation of a more powerful and effective national intranet for times of crisis.

Amnesty International said on Tuesday more than 100 demonstrators had been killed by security forces, a figure rejected as “fabricated” by Iran’s government.

Iranian officials said the steep fuel-price increase was imperative because of crippling American sanctions devastating its oil-based economy, and the money raised would be given to the nation’s poorest people.

The government said the price rises were intended to raise about $2.55bn a year for extra subsidies to 18 million families struggling on low incomes.

The internet blockage made it difficult for protesters to post videos on social media to generate support and also to obtain reliable reports on the extent of the unrest.

Internet blockage observatory NetBlocks said the restoration of connectivity in Iran covered only about 10 percent of the country. News agencies and residents said only fixed-line internet, not mobile internet, was partially available.

US President Donald Trump on Thursday accused the government of shutting down internet access to cover up “death and tragedy” during a wave of street protests.

“Iran has become so unstable that the regime has shut down their entire internet system so that the great Iranian people cannot talk about the tremendous violence taking place within the country,” Trump tweeted.

“They want ZERO transparency, thinking the world will not find out the death and tragedy that the Iranian Regime is causing!”

The IMF said it regretted the violence and loss of life during the protests and had not discussed the fuel-price hike with Iran.

IMF spokeswoman Camilla Andersen added: “In general, the IMF continues to advise oil-producing countries in the Middle East and Central Asia region to reduce fuel subsidies … while compensating the poor with targeted cash transfers, which we understand is the approach Iran has taken.”

Amnesty International said it had documented at least 106 protesters killed by security forces, which would make it the worst street unrest in Iran in at least a decade and possibly since the 1979 Islamic Revolution.

Iran’s UN mission on Wednesday blasted “biased” Amnesty and said only the government could provide an accurate death toll.

Iranian authorities said several people, including members of the security forces, were killed in street violence, which Tehran blamed on “foreign foes” – naming the United States, Israel, and Saudi Arabia. 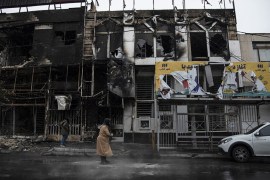 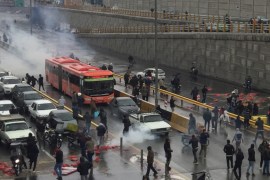 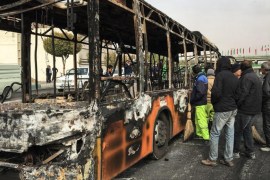