Bolivia‘s interim government presented a bill on Wednesday that aims to forge a path to new elections and defuse street violence that has killed 32 people since a disputed October vote.

The South American country’s two chambers of Congress are expected to debate the election bill beginning on Thursday. The bill would annul the October 20 poll and appoint a new electoral board within 15 days of its passage, paving the way for a new vote after long-term left-wing leader Evo Morales resigned under pressure this month.

A date for new elections was not included in the proposal. The bill called for a “credible and professional” election body “in order to pacify the country and redirect democratic institutionality”.

Currently led by a caretaker government, Bolivia is grappling to mend stark divisions between Morales’s supporters and opponents seeking to move beyond his nearly 14-year rule.

He stepped down on November 10 under pressure from protesters, civil groups, security forces and allies, as well as an international audit that found serious irregularities in the election count and cast doubt on his announced outright victory.

Since then, an interim government under conservative former Senator Jeanine Anez has struggled to quell deadly violence and fanned some divisions with abrupt shifts in policy away from Morales, the country’s first indigenous president.

In a statement earlier on Wednesday, Anez said she would present the bill calling for new elections “as the whole country is demanding” and that it would be through legal, constitutional channels unless legislators  blocked it.

“We have developed a basic bill. It can probably be corrected, agreed upon, enriched by all the sectors that are involved with the aim of pacifying the country and choosing our rulers,” she said. “But there will be elections in the country; we guarantee it.”

Anez has said Morales would be barred from running in any upcoming election. The former president told Al Jazeera in an interview on Tuesday that he wants to return to Bolivia but said he would not run in a new election.

Conflict in the region of Cochabamba and the high-altitude city of El Alto has rattled Bolivia over the last week since Morales’s departure with clashes at a gas power plant blockade on Tuesday that left eight people dead.

That took the total number of deaths in the post-election unrest to 32, according to Bolivia’s official human rights ombudsman. Most of the deaths have occurred in the last 10 days, sparking calls for investigations into human rights abuses.

Al Jazeera’s Mariana Sanchez, reporting from El Alto on Wednesday, said protesters had gathered outside a church housing the bodies of the victims from Tuesday’s clash, demanding justice and blaming security forces for the deaths.

“These people are furious. They say they want the government to withdraw the supreme decree that says the police and the military will not be held accountable in their effort to impose security,” Sanchez said.

Pascual Ticona told Al Jazeera that his young nephew was not protesting when he said he was shot from a helicopter.

“We have also seen the shootings and now there has to be an investigation to know who shot them,” Nadia Cruz, an ombudswoman said.

Families in the church told Al Jazeera that they were not allowed to take their loved ones to a morgue, with autopsies being performed in the church. 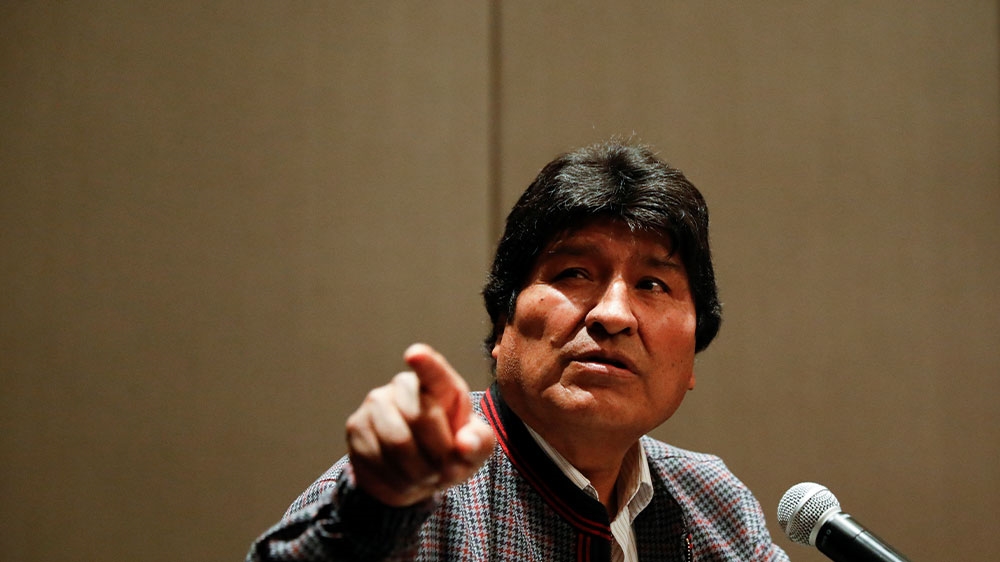 On Wednesday, hundreds of people queued to refill gas canisters in La Paz while lines of cars snaked through the city’s roads waiting to refuel after protests by Morales supporters choked off fuel and food supplies in recent days.

Morales, at a news conference in Mexico, where he was granted political asylum when he fled Bolivia, in turn, accused the interim government of using excessive force against peaceful protesters. The military has said protesters have used explosives, guns and homemade bazookas in clashes.

“They are using bullets against people peacefully mobilising in defence of democracy,” said Morales, who has talked about returning to Bolivia to finish his term until January 22. “It makes us remember times of military dictatorships.”