Hong Kong police broke through the barricades of a besieged university campus on Monday afternoon to arrest those cornered inside, after chaotic scenes overnight and a pre-dawn attempt by police to storm the site.

The push came after protesters on the Polytechnic University campus emerged in force to a barrage of tear gas after police who had blocked all ways out of the area.

Riot squads cordoned off the campus after they attempted to storm the site shortly before dawn. Some protesters tried to escape then, but were beaten back with tear gas. “Hundreds” remained inside, according to Reuters.

“The police have made a large number of arrests,” Al Jazeera’s Sarah Clarke said from the scene, adding that it was “eerily quiet”.

Earlier, a police officer who was confirmed as a media liaison officer was hit in the leg by an arrow and taken to hospital. Photos on the department’s Facebook page showed the arrow sticking out of the back of the officer’s lower leg through his trousers.

In a statement on Monday, police warned people to stop using lethal weapons to attack officers and to halt other acts of violence, saying officers would respond with force and live bullets if necessary.

“Rioters continue to launch hard objects and petrol bombs with large catapults at police officers,” Hong Kong police said. “The shooting range of such large catapults can reach up to 40 metres … Police warn that the violent activities in the Hong Kong Polytechnic University have escalated to rioting.”

On Twitter, Hu Xijin, editor-in-chief of the state-run newspaper Global Times, shared a video of an armoured police car set ablaze in a deluge of petrol bombs, and said that police should be allowed to use live rounds against such attacks.

The city’s Hospital Authority said 38 people were injured overnight, while a Reuters witnesses saw some protesters suffer burns from chemicals in the jets fired from police water cannons.

The United States condemned the “unjustified use of force” in Hong Kong and called on Beijing to protect Hong Kong’s freedoms.

The US urges “all sides to refrain from violence and engage in constructive dialogue,” a senior US official told Reuters.

“As the President has said, the United States expects Beijing to honour its commitments under the Sino-British joint Declaration and to protect Hong Kong’s freedom, legal system and democratic way of life,” the official said.

Elsewhere in the city, black-clad protesters roamed streets around the popular tourist areas of Kowloon some of them armed with petrol bombs.

Others dug up paving slabs and used bricks to block roads, some chanting: “Liberate HK, revolution of our time.”

In Central, home to corporate headquarters and designer shops, office workers also came out onto the streets.

The protests began in early June with mass marches triggered by a proposed extradition bill that would have allowed people to be sent to mainland China for trial.

Although the proposed law has now been withdrawn, public anger has been fuelled by the authorities’ refusal to address protesters’ demands for an independent inquiry into alleged police brutality; an amnesty for those charged with offences stemming from the protests; a retraction of police claims that protesters are guilty of rioting; and giving Hong Kong people the right to elect the entire legislature as well as the chief executive.

The surge in violence over the past week has severely disrupted life in Hong Kong with the closure of the Cross-Harbour Tunnel next to the Polytechnic University and train services suspended. Schools have also been closed.

But while that has become a huge source of frustration to ordinary people many still back the protesters, said Steve Tsang, director of the China Institute at SOAS, in London.

“Most people would hope that it would soon be over, but on the other hand (they think) the demands of the protesters are justifiable so they still support them,” he told Al Jazeera.

“We will see more resistance on the part of the protesters, but the government in Hong Kong and the government in Beijing will not try to reach out for a political compromise so we are looking at a further escalation.”

Chinese soldiers in a base close to the university were seen on Sunday monitoring developments with binoculars, some dressed in riot gear. The day before they emerged from their barracks to help clean up debris.

The presence on the streets of soldiers from China’s People’s Liberation Army (PLA), even to clean up, risks stoking the controversy about Hong Kong’s status as an autonomous area. Chinese troops have appeared on Hong Kong’s streets only once since 1997 to help clear up after a typhoon last year.

Roderic Wye, an associate fellow of the Asia-Pacific Programme at Chatham House, said the leadership in Hong Kong has failed to respond to the “very serious fears” of the young people in the territory over increasing control by Beijing.

“The Hong Kong government has all along decided to treat this as a law-and-order matter and has had no willingness to negotiate or talk or listen in any serious way to the demands of the protesters. At the end of the day, there has to be some kind of political solution,” Wye told Al Jazeera.

The High Court on Monday ruled that a government ban on the wearing of face masks – introduced under colonial-era legislation – was unconstitutional.

In the university courtyard, civil engineer Joris, 23, said he was prepared to go to jail in his fight against the government. Those shooting arrows were protecting themselves, he said. Makeshift catapults had also been developed.

“The protesters have been reacting to the police,” he told Reuters. “We haven’t fought back as much as we could. I would be prepared for jail. We are fighting for Hong Kong.”

An armoured police vehicle that was set ablaze by petrol bombs in Sunday’s violence was towed away in the morning, as University President Teng Jin-Guang said in an online video that he had brokered a truce with police to allow protesters on campus to leave peacefully.

Many of those on the sprawling red-brick campus close to the city’s harbour said they would never surrender.

“We’ve been trapped here, that’s why we need to fight until the end. If we don’t fight, Hong Kong will be over,” said Ah Lung, a 19-year-old protester. 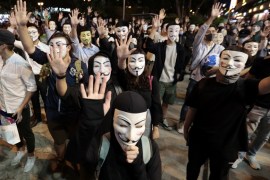 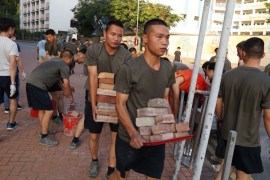 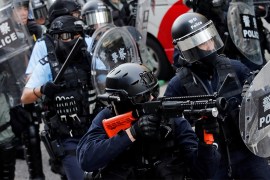 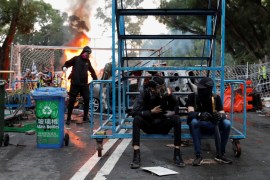