Former Lebanese finance minister and business tycoon Mohammed Safadi has withdrawn his candidacy to be the next prime minister, amid pressure from protesters who have been calling for an overhaul of the country’s political system.

In a statement released by his office on Saturday, Safadi, 75, said it would be difficult to form a “harmonious” cabinet supported by all the parties.

Safadi added that he hoped outgoing Prime Minister Saad Hariri would be designated again for the post.

Hariri quit on October 29 in the face of unprecedented anti-government protests against a ruling class that is widely accused of overseeing rampant state corruption and steering Lebanon into its worst economic crisis since the 1975-90 war.

Safadi, a former member of parliament from the predominantly Sunni northern city of Tripoli, emerged as a candidate on Thursday when political sources and Lebanese media said three major parties had agreed to support him for the position.

Protesters rejected Safadi’s potential nomination, saying it would run counter to nationwide protests calling to remove a political elite they see him as part of.

Demonstrators also gathered in front of one of his properties in his hometown of Tripoli to protest against what they regarded as a provocation.

Safadi was finance minister from 2011 to 2014 under Prime Minister Najib Mikati, and was also previously minister of economy and trade.

He has maintained close relations with the Saudi royal family. In 1975, he left Lebanon for the kingdom and built a business empire in the construction field.

More nationwide rallies are planned for Sunday to maintain pressure on the country’s political elite, widely seen as unable to deal with a deepening economic crisis.

The move came as the US embassy in Lebanon on Saturday expressed support for the popular protest movement that has swept the country since October 17.

“We support the Lebanese people in their peaceful demonstrations and expressions of national unity,” the embassy said on Twitter.

We support the Lebanese people in their peaceful demonstrations and expressions of national unity.

According to Lebanon’s sectarian power-sharing system, the prime minister must be a Sunni Muslim .

The process for choosing a new PM requires President Michel Aoun, a Maronite Christian, to formally consult members of Parliament on their choice. He must designate whoever gets the most votes.

Since Hariri’s resignation, the government has stayed on in a caretaker capacity.

The Iranian-backed Hezbollah and Amal movements in Lebanon have wanted Hariri to return as premier, but the Shia groups and President Aoun, a Hezbollah ally, have demanded the inclusion of both technocrats and politicians in the cabinet, while Hariri has insisted on a cabinet composed entirely of technocrats. 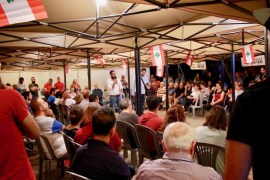