Soldiers belonging to China‘s People’s Liberation Army (PLA) have briefly left their barracks to help Hong Kong residents clean up debris left over from anti-government demonstrations in a rare and highly symbolic troop movement unsolicited by the city’s embattled government.

Saturday’s action saw scores of soldiers from the garrison sporting crewcuts and identical gym kits conduct a lightning-quick removal of bricks and debris near their base, the AFP news agency reported.

Confirming the brief deployment on Weibo, China’s Twitter-like social media platform, the PLA said it acted to open a debris-strewn road outside their Kowloon Tong barracks to traffic, winning “applause from residents” in the process.

A city spokesman meanwhile said the Hong Kong government did not request assistance from the PLA, which has previously stayed confined to its garrison during months of protests, but the military initiated the operation as a “voluntary community activity”.

The presence of PLA troops on Hong Kong’s streets could stoke further controversy over the Chinese-ruled territory’s semi-autonomous status.

Demosisto, a pro-democracy organisation, said Saturday’s clean-up operation could set a “grave precedent” if the city’s government invites the military to deal with internal problems, the Reuters news agency reported.

The developments followed some of the worst violence seen during more than five months of anti-government demonstrations after a police operation against protesters at the Chinese University of Hong Kong on Tuesday.

The authorities have since largely stayed away from at least five university campuses that had been barricaded by thousands of students and activists who stockpiled petrol bombs, catapults, bows and arrows and other weapons.

Many protesters appeared to have left the campuses by late Saturday, though some remained behind to man barricades. Hong Kong’s Cross-Harbour Tunnel was still blocked by protesters occupying Polytechnic University.

The months-long protests that have rocked Hong Kong have been fuelled by widespread anger at the perceived Communist Party meddling in the former British colony, which was guaranteed its freedoms when it returned to the Chinese rule in 1997.

The protests started against a now shelved bill to allow extradition to China but have billowed into wider calls for democracy.

Beijing, for its part, denies interfering in Hong Kong and has blamed the unrest on foreign influences.

Chinese state media repeatedly broadcast comments made on Thursday by President Xi Jinping, in which he denounced the unrest and said “controlling chaos while restoring order” was the territory’s “most urgent task”.

Carrie Lam, Hong Kong‘s chief executive, has meanwhile condemned protesters as the “enemy of the people”.

In recent weeks, clashes between protesters and police have become increasingly violent.

Two people have died this month as the clashes intensified, while the financial hub has been pushed into a recession by the turmoil.

A 70-year-old street cleaner died on Thursday after being hit on the head by brick police said had been thrown by rioters. On Monday, police blamed a rioter for dousing a man in petrol and setting him on fire. The victim is in critical condition.

On the same day, police shot a protester in the abdomen. He was in a stable condition as of Saturday.

Several streets remain strewn with debris, barricades and scarred by scorch marks from petrol bombs thrown during the demonstrations. 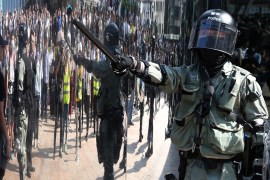 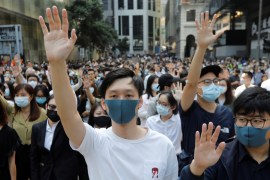 ‘A heavy toll’: Hong Kong confirms its economy is in recession

Government now says it expects economy to post its first full-year contraction since 2009 as protests continue.