Venice’s mayor has ordered the iconic St Mark’s Square be closed as the flood-hit city braces for another exceptional high tide.

“I am forced to close the square … in case anything happens,” Mayor Luigi Brugnaro said on Friday.

Brugnaro’s announcement came after Italy declared a state of emergency for the UNESCO city where perilous deluges have caused millions of euros worth of damage.

Churches, shops and homes in the city of canals have been inundated by unusually severe “acqua alta”, or high waters, which on Tuesday hit their highest level in half a century.

The crisis, driven by bad weather, has prompted the government to release 20 million euros ($22 million) in funds to tackle the devastation.

The water was expected to reach 1.5 metres (5 feet) mid-morning on Friday as strong storms and winds batter the region – lower than Tuesday’s peak but still dangerous, local officials said.

Undeterred, tourists had been strolling around the flooded St Mark’s Square during sunny breaks from the rain, snapping selfies in neon plastic boots.

Prime Minister Giuseppe Conte, who has called the flooding “a blow to the heart of our country”, said late on Thursday that a state of emergency had been approved.

Earlier that day he met Venice’s mayor and emergency services before jumping in a speed boat to visit businesses and locals affected by the tide.

Residents whose houses had been hit would immediately get up to 5,000 euros in government aid, while restaurant and shop owners could receive up to 20,000 euros and apply for more later, he said.

Several museums remained closed to the public on Thursday.

As authorities assessed the extent of the damage to Venice’s cultural treasures, such as St Mark’s Basilica where water invaded the crypt, locals were defiant.

Many stopped for their usual coffees at flooded bars, drinking espressos while standing in several inches of water.

“For the tourists it’s amazing, it’s something to see. But for the people who live here it’s a real problem,” Litschauer said, cradling her white Chihuahua, Pablo.

“It’s strange. Tourists are taking pictures but the city is suffering.”

The Locanda Al Leon hotel said its bookings had suffered from the international media coverage of the flood.

Under the arches of the Ducal Palace, a couple from Hong Kong posed for photos in the chilly morning sun.

“Actually this is a good experience. It’s an adventure.” 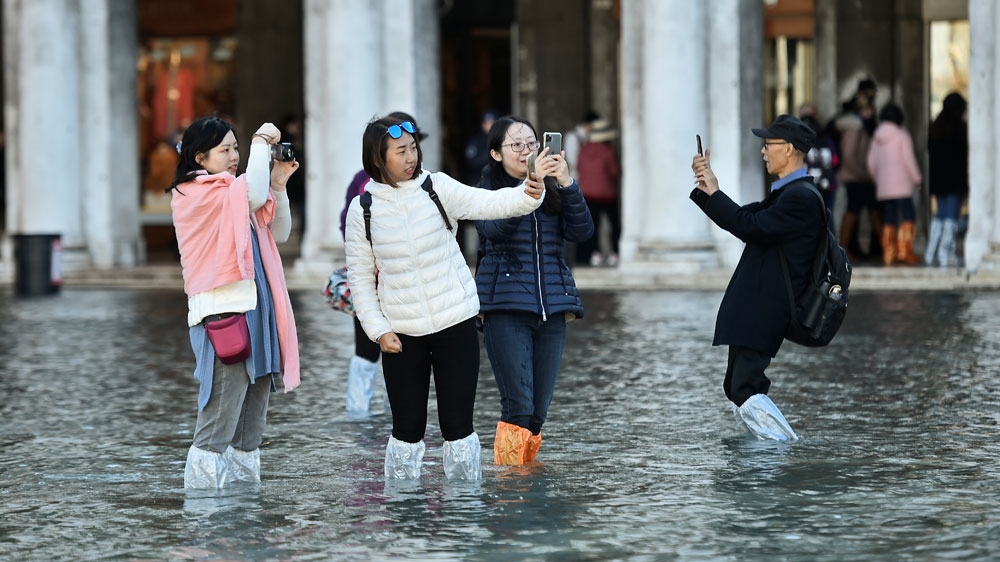 Former Prime Minister Silvio Berlusconi arrived for a tour of the damage sustained to the basilica, while rival leader of the Italian right Matteo Salvini was due to drop by for the same on Friday.

“The damage it’s causing to monuments and the people is worrying,” she said, wondering if climate change was to blame.

Many, including Venice’s mayor, have blamed the disaster on global warming and warned that Italy – a country prone to natural disasters – must wake up to the risks posed by ever more volatile seasons.

“We need to be resilient and adapt. We need a policy that looks at the climate through completely different eyes,” Environment Minister Sergio Costa said on Thursday.

Brugnaro has estimated the damage to Venice at hundreds of millions of euros.

The Serenissima, as the floating city is called, is home to a mere 50,000 residents but receives 36 million global visitors each year.

A massive infrastructure project has been under way since 2003 to protect the city, but it has been plagued by cost overruns, corruption scandals and delays.

The plan involves 78 gates that can be raised to protect Venice’s lagoon during high tides – but a recent attempt to test part of it caused worrying vibrations and engineers discovered it had rusted. 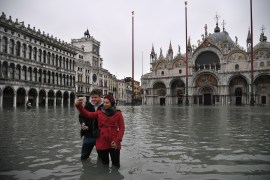 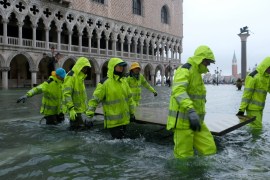 Mayor Luigi Brugnaro said he would declare a state of disaster after ‘exceptional’ floods blamed on climate change.