A suspected US citizen who fought with the armed group ISIL and is trapped in no-man’s land between the Turkish and Greek border is “not our problem”, President Recep Tayyip Erdogan said on Tuesday.

Turkish news reports said on Monday an American who was deported by Turkey was caught in the heavily militarised zone between Greece and Turkey after Greek authorities refused to take him in.

Asked to comment on the reports, Erdogan said in televised remarks: “Whether they are stuck there at the border it doesn’t concern us. We will continue to send them. Whether they take them or not, it is not our problem.”

A Turkish official told AFP news agency the man refused to be returned to the US and instead asked to go to Greece.

The official said he spent the night in the no-man’s land between the two borders, next to the Turkish province of Edirne.

It was not clear why Turkey thought Greece would accept a US citizen.

A US State Department official said it was “aware of reports of the detainment of a US citizen by Turkish authorities”, but could not comment further because of privacy rules.

Turkey has criticised Western countries for not taking back captured members of the Islamic State of Iraq and the Levant (ISIL or ISIS).

It has sought to publicise the deportations following criticism of Turkey’s offensive against Kurdish fighters in northern Syria last month, which several NATO allies – including France and Germany – said would undermine the fight against ISIL.

The United Nations secretary-general, Antonio Guterres, called on Tuesday for an international accord on the fate of foreign ISIL members being held in the Middle East, saying it was not up to Syria and Iraq “to solve the problem for everyone”.

“We need international cooperation to solve the problem,” Guterres, who is attending the Paris Peace Forum alongside some 30 world leaders, told France’s RTL radio.

“We cannot just ask Iraq and Syria to solve the problem for everyone. There must be real international solidarity,” he said.

“If everyone starts using these people against each other, we will inevitably see terrorists freeing themselves and doing dangerous things.”

Speaking to reporters before a visit to the US, Erdogan on Tuesday issued a veiled threat suggesting Turkey could release ISIL prisoners it holds and send them to Europe.

The Turkish leader was angered by a European Union decision to impose sanctions on his country over its drilling for gas in Mediterranean waters off Cyprus.

“You should revise your stance toward Turkey, which at the moment holds so many ISIL members in prison and at the same time controls those in Syria,” Erdogan warned European nations, a day after the EU unveiled a system to sanction Turkey.

He added: “These gates will open and these ISIL members who have started to be sent to you will continue to be sent. Then you can take care of your own problem.”

Erdogan has said Turkey is not a “hotel” for ISIL fighters and criticised the West for its reluctance to take back citizens who joined the ranks of the armed group as it sought to establish a “caliphate” in Iraq and Syria in 2014.

France said on Tuesday it will take back 11 suspected French fighters from Turkey.

Paris – which has between 400-500 nationals held in Kurdish-controlled northern Syria, including about 60 fighters – had been adamant it would not take back adults who joined ISIL. It wanted to seal an agreement with Iraq on taking and prosecuting its nationals from Syria.

Interior Minister Christophe Castaner declined to give details about the individuals, but said they were known by France and would be handed over to judicial authorities when they arrive.

Turkey deported citizens of the US, Denmark, and Germany on Monday and announced plans to soon expel seven other German nationals, two Irish citizens, and 11 French nationals.

Turkey said last week about 1,200 ISIL fighters were in Turkish prisons and 287 members – including women and children – were captured during Turkey’s military operation in northern Syria, which it launched last month.

While Turkey has quietly deported ISIL sympathisers for years, it raised the issue more forcefully after Western nations refused to back its military campaign against Syrian Kurdish fighters, whom Ankara considers to be “terrorists” linked to Kurdish armed groups fighting inside Turkey.

Many countries have voiced concerns the Turkish operation would lead to a resurgence of ISIL. 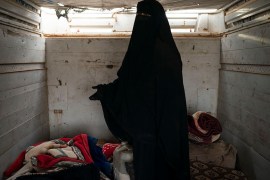 A court in The Hague said the government must actively help repatriate 56 children living in poor conditions in Syria. 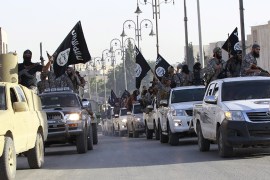 Turkey deports US national as it starts returning ISIL fighters

Turkish official says seven German nationals will be returned on November 14, according to state media. 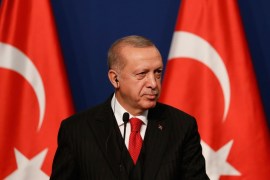