Evo Morales has stepped down as Bolivia‘s president after the military encouraged him to leave the post to ensure stability following weeks of protests against his disputed re-election.

In a televised address on Sunday, Latin America’s longest-serving leader, said he was resigning for the “good of the country”.

“I want to tell you, brothers and sisters, that the fight does not end here,” Morales said from his stronghold in the Chapare region in central Bolivia.

“We will continue this fight for equality, for peace,” added the 60-year-old, who called himself the victim of a “coup”.

The announcements prompted celebrations but there were also reports of violent unrest erupting in the administrative capital, La Paz, in the city of El Alto and other parts of the country.

Morales said his house in Cochabamba was attacked by “violent groups” and, on Twitter, accused police of issuing an “illegal” warrant for his arrest.

Bolivia’s police chief denied the claim in a television interview on Sunday, while the military said in a statement that it was launching air and land operations to “neutralise” groups acting unlawfully.

The resignation of the last survivor of the so-called “pink tide”, which ushered in left-wing governments in Latin America two decades ago, prompted reactions across the region and beyond.

Here is a round-up of international responses to the latest developments.

Antonio Guterres, the UN secretary-general, expressed deep concern about the situation in Bolivia, according to his spokesman.

His foreign minister, Marcelo Ebrard, went a step further, calling the developments in Bolivia a “coup”.

Ebrard added that Mexico would call an urgent meeting of the Organization of American States (OAS).

On Sunday, Ebrard described the events in Bolivia as “an ongoing military operation”.

“It was similar to those tragic events that gripped our Latin American [continent] last century,” said Ebrard, who assumed his role after a left-wing party won Mexico’s election in July last year.

“Mexico will maintain its position of respect for democracy and institutions.”

Ebrard added that Mexico had already received 20 members “of the Bolivian executive and legislative in its official residence in La Paz,” adding that his country would offer Morales asylum if he sought it.

He said on Monday that Mexico had not received a reply on its offer of asylum to Morales.

Nicaragua’s left-wing government also came to Morales’s defence, issuing a statement that decried the situation as a “coup”.

“The government of Nicaragua … denounces and strongly condemns the coup d’etat that was realised today,” President Daniel Ortega said in a statement.

“We reiterate our firm and unchanging support for President Evo, his constitutional government,” Nicaragua’s vice president and first lady, Rosario Murillo, said in a statement.

It also called for a prompt peaceful and democratic solution within the framework of the constitution.

Argentina’s foreign ministry endorsed a report by the OAS, which on Sunday recommended the holding of new elections, and expressed that if new polls were to be held they should be carried out “with all guarantees of freedom and transparency”.

Meanwhile, Argentina‘s President-elect Alberto Fernandez, who will assume the role in December, said a “coup” had been carried out in Bolivia.

“It was a coup perpetrated against the president who had called for a new electoral process.”

“We, defenders of democratic institutions, repudiate the unleashed violence that prevented Evo Morales conclude his presidential term, and altered the course of the electoral process,” he added.

Venezuela’s President Nicolas Maduro also condemned what he described as a “coup” against Morales, adding that rallies would be held to defend “the life of the Bolivian native people, victims of racism”.

In Peru, the government called for the restoration of “peaceful existence in Bolivia”.

It also called for “transparent elections” with the help of the OAS.

He also called on the international community to mobilise to defend Morales’s life and freedom.

For its part, the Colombian foreign ministry issued a statement calling for the mobilisation of the international community for “a process of peaceful transition”.

The centre-right government also requested an urgent meeting of the OAS’s permanent council to discuss the events.

Brazil‘s far-right President Jair Bolsonaro said in a post on Twitter that Morales’s resignation was the culmination of “denunciations” of “fraud allegations”.

“The lesson for us is the need, in the name of democracy and transparency, to count votes that can be audited. The VOTE is a sign of clarity for Brazil!”

“It is unfortunate that Latin America has an economic elite that does not know how to live with democracy. And the social inclusion of the poorest,” he added.

The US said it was monitoring the political situation in Bolivia and calling on civilian leadership to maintain control, a State Department official said on Monday.

“It is crucial that the constitutionally delineated civilian leadership maintain control during the transition,” the official told Reuters news agency on customary condition of anonymity.

“We call on everyone to refrain from violence during this tense time and we will continue to work with our international partners to ensure that Bolivia’s democracy and constitutional order endure.”

In a statement, Russia‘s foreign ministry called on all political forces to “show common sense” while it encouraged them to act responsibly.

It also accused Bolivia’s opposition of unleashing a wave of violence in the country.

In the UK, Jeremy Corbyn, the head of the main opposition Labour Party, also labelled Morales’s resignation a “coup”.

To see @evoespueblo who, along with a powerful movement, has brought so much social progress forced from office by the military is appalling.

I condemn this coup against the Bolivian people and stand with them for democracy, social justice and independence. #ElMundoConEvo

Federica Mogherini, European Union‘s foreign policy chief, has urged restraint and responsibility from all parties in the country, while she asked them to “lead the country peacefully and quietly to new credible elections”.

.@FedericaMog on the recent developments in 🇧🇴 Bolivia: "Our wish that all parties in the country exercise restraint and responsibility and lead the country peacefully and quietly to new credible elections that can let the people of Bolivia express their democratic will" #FAC pic.twitter.com/ax9nV78oMk 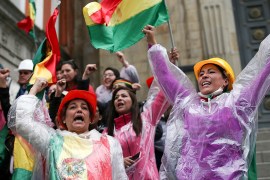 Crowds celebrate long-time leader’s departure after disputed October election amid concern over what comes next. 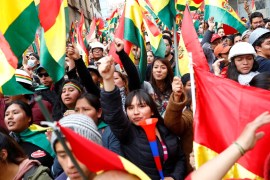