Phnom Penh, Cambodia –  A Cambodian court has lifted the house arrest of opposition leader Kem Sokha after more than two years, but banned him, however, from participating in politics and travelling outside the country as the charges against him remain.

The move on Sunday came a day after self-exiled acting opposition leader Sam Rainsy failed to return to Cambodia, as promised, and a few days before the European Union is scheduled to finalise its report on the potential withdrawal of a key trade agreement.

Published by pro-government outlet Fresh News, the court order stipulates that Kem Sokha, who was arrested in 2017 and accused of treason, remains under court supervision and forbids him from going abroad and conducting any political activities.

Later on Sunday, Kem Sokha, the cofounder of the Cambodia National Rescue Party (CNRP), which was dissolved in 2017 in a move decried by rights groups, called for the charges against him to be dropped. In a Facebook post, the 66-year-old said his lawyers on Thursday had submitted a request to the investigating judge to drop the charges but that the government had only lifted some of his conditions.

“As an innocent person who suffered detention for two years without being guilty, I still continue to demand to drop the charges against me,” he said. “Today’s decision is a first step, but I, as well as many other Cambodians who have lost their political rights, still need real solutions and justice.”

Saory Pon, general secretary of the CNRP overseas section, said the release subject to conditions was part of a strategy to avoid the loss of the EU’s Everything But Arms agreement, which allows Cambodia to export tariff-free to the bloc. The EU has threatened to strip the country of its EBA status citing alleged human rights breaches.

“|I think that’s the tactic that [Prime Minister] Hun Sen uses just to show the international community that he is willing to release the … political tension in Cambodia. But if you look at the reality, it’s just on bail. It does not allow our president Kem Sokha to exercise his political freedom, it does not allow him to go abroad,” he said.

But Council of Ministers spokesman Phay Siphan said the move was unrelated to EBA as the matter lay in the hands of the courts. “It is a due process in Cambodia,” he said. “This action relates to the court.”

Phay Siphan added that should Kem Sokha be convicted, Hun Sen could ask for a royal pardon for the opposition leader.

In a case that drew widespread condemnation, Kem Sokha was arrested in September 2017 for alleged “conspiracy with a foreign power”, a few months after communal elections and before national elections in July 2018.

In September 2018, Kem Sokha was released from prison but put under de facto house arrest with strict conditions, including being barred from speaking to opposition members and foreigners.

Saory Pon called on the government to drop all charges against Kem Sokha and acting CNRP president Sam Rainsy, as well as against all other opposition supporters who had been arrested for their political activism, and to lift the ban on 118 opposition members to allow them to return to politics.

“On behalf of the Cambodia National Rescue Party, I urge… the international community to increase pressure,” he said.

Kem Sokha’s daughter, Kem Monovithya, told Al Jazeera she considered the release “the first of many steps that need to happen in order to restore Cambodia’s democracy”.

“We still continue to call for the drop of all charges and reinstatement of his political rights,” Monovithya also wrote on Twitter.

Human Rights Watch Deputy Asia Director Phil Robertson said Kem Sokha should not have been arrested in the first place. “Kem Sokha’s release from house detention is a last-minute attempt to deflect European anger at the shoddy way PM Hun Sen and Cambodia have dealt with human rights concerns raised in the EBA process. But it’s really too little, too late for the EBA preliminary determination on November 12,” he told Al Jazeera.

“Only in Hun Sen’s repressive Cambodia would letting someone out of house arrest after two years on politically fabricated charges be considered ‘progress’ of some sort.”

Teddy Baguilat, a board member for Asean Parliamentarians for Human Rights and former Philippines MP,  expressed a similar view.

“This is just another cynical move by Hun Sen to try and hoodwink the international community into thinking he is lifting his grip on the political opposition and should be seen for what it is,” he said in a statement.

“Today’s Cambodia is a country run on fear under a one-party authoritarian rule where open discussion and political activity or dissent is completely outlawed.”

US Ambassador Patrick Murphy, meanwhile, said on Twitter that the lifting of the de facto house arrest was not enough. “We note the partial lifting of restrictions on former National Assembly VP Kem Sokha,” he said. “This is a step in the right direction, but for genuine progress his full rights and freedoms must be restored.”

On Facebook, the US embassy called on authorities to also release other prisoners. “The United States calls for the unconditional release of all those who have been arbitrarily or unlawfully detained, including journalists, civil society activists, and supporters and members of political opposition parties,” it said.

This week, Sam Rainsy said he wanted to return to his country on November 9, Cambodia’s Independence Day, along with other opposition figures to “restore democracy” by triggering a popular movement to force Hun Sen, who has ruled for more than three decades, from office.

He only arrived, however, in Malaysia’s capital, Kuala Lumpur, where he is scheduled to meet politicians on Tuesday.

The Cambodian government has described the attempted return as a coup attempt against Hun Sen and has sought support from neighbouring countries to prevent the opposition leader’s return.

Shortly after Sam Rainsy’s announcement, Cambodian authorities arrested dozens of activists and deployed troops at the border, while border checkpoints were temporarily closed on Saturday. According to a UN statement, credible information showed that at least 52 activists had been arrested and 89 charged with “plotting against the state” since August. 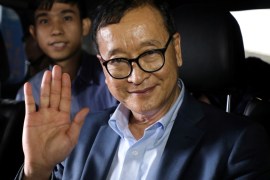 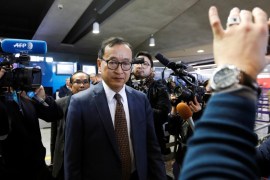 Exiled opposition leader was barred from boarding a Thai Airways flight to Bangkok on Thursday afternoon. 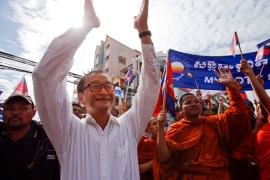 ‘No alternative’: Rainsy determined to return to Cambodia

Exiled opposition leader insists he will return as planned, from Paris through Thailand, despite increasing obstacles.