Nineteen farmers were killed and several others injured in the mountainous northern Philippines when the truck they were in plunged backwards down a deep ravine, police said on Friday.

The victims were on their way home from collecting government-subsidised seeds late on Thursday in the town of Conner, Apayao province when the driver lost control of the vehicle in the latest tragedy on the country’s perilous roads.

Either the engine or brakes failed as the truck made its way up an incline. The vehicle, with some 40 people on board, as well as the supplies of rice seeds, then plunged back down the hill into a 20-metre (65-foot) ravine.

He added that at least 20 other passengers sustained injuries, but were expected to survive. According to news reports, the truck driver was among those who survived.

Canipas said the weight of the seeds may have made the crash worse, potentially crushing some of the victims.

Deadly road accidents are common in the Philippines, where inadequately maintained buses and poorly-trained drivers form the backbone of land transport options.

Twenty people, including children, were killed in September in the southern Philippine town of T’boli when a truck carrying a group home from a party at the beach crashed.

In many parts of the Philippine archipelago, cargo trucks also serve as passenger vehicles because there is little in the way of public transport.

Despite safety concerns, many people with limited financial means use the trucks because the journey is usually free. 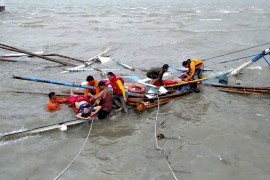 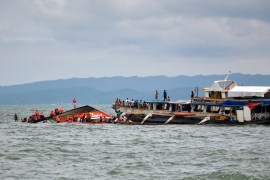 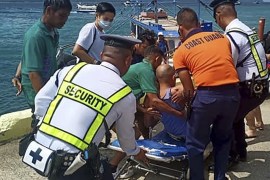 Seven people drown after their vessel is hit by strong waves off resort island of Boracay.