Egypt‘s security forces have killed 83 suspected fighters in operations in central and North Sinai over the past month, the military said on Monday.

It also said 61 criminal suspects were detained and it found and detonated 376 explosive devices during the period, which it dated from September 28.

One officer and two soldiers died or were wounded, it added. The military did not say what armed groups those killed belonged to.

Conflict in the Sinai escalated after then-president Mohamed Morsi of the Muslim Brotherhood was toppled by the military in 2013.

In late 2017, North Sinai was the scene of the deadliest attack in Egypt’s modern history when fighters killed more than 300 worshippers at a mosque, without any group claiming responsibility.

In February 2018, the army launched a military operation aimed at defeating Islamic State of Iraq and the Levant (ISIL or ISIS) or related armed groups in the Sinai Peninsula.

Hundreds of fighters and dozens of soldiers have been killed since the start of the offensive, according to the armed forces.

Access to North Sinai has been restricted for years, making it difficult to independently verify what is happening on the ground.

In a 134-page report published in May, Human Rights Watch (HRW) accused Egyptian security forces of committing widespread abuse against civilians, some of which amounted to war crimes, it said.

According to the report, armed groups also committed horrific crimes, including kidnapping and torture of residents, some of whom were killed, the New York-based watchdog said. They also killed captured members of the security forces, HRW said.

Egypt’s ISIL affiliate, the Sinai Province, has sworn allegiance to the new leader named by the group following the death of Abu Bakr al-Baghdadi, it said on Telegram on Saturday. 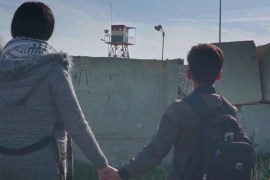 Gaza, Sinai and the Wall

The story of Palestinians whose lives changed in 1982 when Egypt and Israel built a wall dividing Sinai and Gaza. 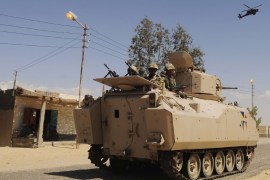 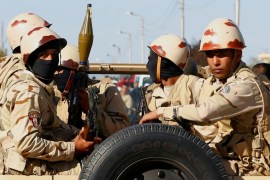 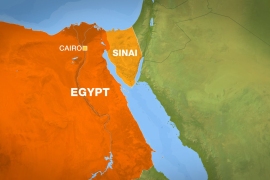 Four gunmen also killed in the attack on police near the regional capital El Arish.