Taliban officials said that several of the armed group’s members have been freed from Afghan jails, including former shadow governors, the first move of its kind since a peace deal that seemed imminent was declared “dead” and just days after a US envoy met top Taliban leaders in the Pakistani capital.

The officials also said the Taliban has released three Indian engineers who were being held, though that has yet to be confirmed by New Delhi or the Afghan government.

The Taliban officials spoke to AP news agency on Sunday on condition of anonymity because they were not cleared by their leadership to speak to the media.

The Taliban have established a shadow government throughout the country; in areas under their control they have even established courts.

Afghanistan‘s defence department and the president’s office declined to comment to AP.

US peace envoy Zalmay Khalilzad met last week with the Taliban’s top negotiator Mullah Abdul Ghani Baradar, a co-founder of the hardline Taliban movement and head of a Taliban delegation to the Pakistani capital.

The delegation said it was in Islamabad to discuss the condition of roughly 1.5 million Afghan refugees living in the city.

US officials said Khalilzad was in the Pakistani capital to follow up on talks he held in September in New York with Pakistani officials, including Prime Minister Imran Khan.

The US insisted Khalilzad was not in Pakistan to restart peace talks. But the Taliban and Pakistan confirmed the two sides met.

This is the first meeting Khalilzad has held with the Taliban since last month when US President Donald Trump declared “dead” a deal that seemed done but for the signing, blaming an uptick in violence by the Taliban, that included the death of a US soldier.

He as criticised the Afghan government for not doing more to defend Afghanistan and relying on US and NATO troops to police the country.

While details of Khalilzad’s meeting with the Taliban have been sketchy, there have been reports that the two sides did discuss prisoner exchanges, with the freedom of two professors – an American and an Australian – of the American University of Afghanistan featuring in the discussions.

The Taliban have released videos of the two men and have said their conditions have deteriorated. 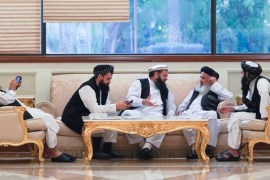 Taliban to visit Pakistan amid stalled US talks

The Taliban delegation will reportedly inform Pakistan’s leadership of factors that derailed the talks with the US. 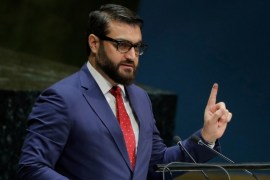 Kabul to Taliban: ‘Join us in peace or we will continue to fight’

Afghan national security adviser praises his countrymen’s commitment to democracy in his address to the UN. 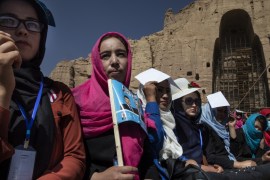