Tunis, Tunisia – Polls have closed in Tunisia where nearly seven million people were eligible to vote in the country’s parliamentary election, a legislative race expected to end with no clear winner.

Voting began on Sunday at 8am local time (07:00 GMT) in the presence of local and international observers, including regional experts and diplomats.

This is the second such vote since the 2014 adoption of Tunisia’s constitution following the overhrow of Zine El Abidine Ben Ali three years earlier. Ben Ali, who ruled over the for 24 years before the civilian uprising in 2011 forced him to flee, died last month in Saudi Arabia.

While Tunisia is often referred to as the only success story to come out of the Arab Spring, the elections were held against a backdrop of spiralling food prices, inflation and more than 15 percent unemployment.

Preliminary results will be announced on October 10 and official results on November 17. The assembly will then be given two months to choose a prime minister and form a new government.

More than 1,500 lists and 15,000 candidates were running for 217 seats, with registered political parties and independents vying for control of the single chamber.

Opinion polls have been banned but results are likely to mirror last month’s presidential election, which saw newcomers Kais Saied and Nabil Karoui advance to a run-off as Tunisians turned their backs on the country’s political elite.

Independents will “certainly perform well because of the pushback on traditional politics,” Sarah Yerkes of Carnegie, a Washington-based think-tank, told Al Jazeera.

However, Yerkes said Ennahdha – currently the biggest force in Tunisia’s parliament – and Nabil Karoui’s Qalb Tunis are also likely to do well “because of their grassroots support”.

One-third of the lists are independent, while the presidential outcome suggests that traditionally powerful parties such as Nidaa Tounes straggle behind. Never before has Tunisia’s legislative outcome been so unpredictable.

Amid the uncertainty, experts agree that no single list will win the 109 seats needed to rule parliament, resulting in a coalition of blocs. This, in turn, could make it harder for parliament to form a government – an unnecessary hurdle in a country that is dealing with a myriad of other social issues.

“No one works for the interest of the country,” lamented a 39-year-old taxi driver who asked to remain anonymous. He was still undecided over who to vote for, admitting to having been overwhelmed by the sheer amount of campaign pamphlets in circulation. “Politicians are the worst part of Tunisia,” he said, mirroring the country’s widespread sense of disillusion.

‘Good of the country’

In the neighbourhood of Sousse Corniche, on the Gulf of Hammamet, voting polls were still empty at 10am.

“I voted for her because she is the one who will face the Ennahdha party, she will never ally with them,” she said, in reference to Moussi, a former official in Ben Ali’s dissolved Democratic Constitutional Rally (RCD) party.

“She will also help promote women’s rights, I heard her the other day on the radio talking about how she will pass a law to prevent sons-in-law from inheriting what belongs to the mother-in-law.”

She said she would vote for detained media magnate Nabil Karoui in the second round of the presidential election because he “was already rich” and would focus on helping the poor and spurring economic growth.

Bechir Korbi, a 34-year-old plumber, said he voted for Ennahdha because he believed they offered the best programme.

“I didn’t attend their meetings nor did I watch their debates but I know they have a good programme. We discuss this with my friends when we meet,” Korbi told Al Jazeera.

“I voted for Saied in the first round and will vote for him again. I am not involved in politics, I just want the good of the country … I know Ennahdha will do what’s best for the country.”

The economy is the top priority

In Cite Ettadhamen, where unemployment, crime and drug-use abounds, politicians wasted no time in capitalising on the people’s woes.

On one street corner, young men and women clad in the red and white of the Al Amal party promised better education and healthcare and lower unemployment.

“The most important thing is unemployment, a lot of youths with degrees but no employment,” said Yosra, who did not wish to give her full name, thrusting a campaign pamphlet into the hands of a passer-by.

But some residents remained sceptical. “People don’t have enough money to think about politics,” said Saber Werfelli, a young cafe owner. “Most people are hungry, if you give them food you keep them quiet.”

Finding a solution to unemployment, spiralling food prices and inflation will be up to the legislature and new prime minister rather than the president, whose mandate is limited to foreign affairs, defence and national security. 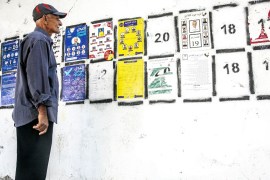 Tunisia’s parliamentary elections at a glance

Tunisians head to the polls to elect 217 new members of parliament, a week before voting in a new president. 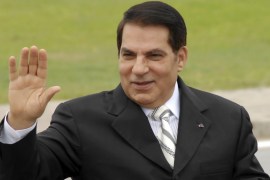 Ben Ali may be dead, but his regime is not

Structures of violence and corruption of the Ben Ali era remain in place and subvert the country’s democratic struggle.