As clouds of white smoke billowed overhead, Showqi had no other option but to flee.

Nearby, dozens of people scattered as they tried to outrun a fresh volley of tear gas fired by security  forces in Tahrir Square, in the centre of Iraq‘s capital, Baghdad.

“They’re the lucky ones, [the ones] who were not targeted by government snipers,” Showqi said on Saturday, referring to the men who had run alongside him, some holding masks and pieces of cloth to their faces as they coughed and gasped for air.

For five straight days, large crowds of mostly young Iraqis have poured onto the streets of Baghdad and other cities in an outburst of anger over chronic unemployment, corruption and poor public services, including access to water and electricity.

Along with tear gas, police have also fired water cannon, live rounds and rubber bullets to disperse the rallies, which began on Tuesday when thousands in Baghdad answered a call on social media.

Since then, nearly 100 people have been killed, with some protesters saying snipers were involved in breaking up the demonstrations. About 4,000 people have also been wounded in the clashes, according to figures by the semi-official Iraqi High Commission of Human Rights.

In a bid to quell the unrest, the year-old government of Prime Minister Adel Abdul Mahdi imposed a near-total internet blackout and declared a curfew in certain areas, before lifting it on Saturday morning.

Showqi, whose last name has been withheld for his safety, said many protesters had been beaten by riot police, while others were taken into custody.

“People are starving, that’s why they’re protesting,” the 51-year-old said. “We have a lot of oil reserves here, but we don’t see any of the country’s wealth.

“Where is it all going?”

Home to the world’s fourth-largest oil reserves, Iraq has been ravaged by decades of near-continuous conflict, including a US-led invasion, that has destroyed much of the country’s infrastructure.

Nearly 60 percent of Iraq’s 40 million people live on less than $6 a day, according to World Bank figures. The economic woes of the rapidly growing and mostly young population have persisted despite the country enjoying a period of relative stability following the recapturing of a number of urban centres from the Islamic State of Iraq and the Levant (ISIL or ISIS) armed group in 2017.

The demonstrators, whose movement appears to be leaderless and cuts through ethnic and sectarian lines, initially took to the streets to decry high-level corruption and demand better pay and social justice. But their demands have since expanded to include calls for the removal of Abdul Mahdi’s government and the wider political system as a whole.

In a highly anticipated sermon on Friday, Grand Ayatollah Ali al-Sistani, the country’s top Shia spiritual leader, called for a de-escalation of violence “before it is too late” and urged the government to enact reforms.

Others, like Iraqi President Barham Salih, denounced the violence against demonstrators and called for the preservation of the people’s “constitutional right” to organise and protest.

Meanwhile, influential Shia leader Muqtada al-Sadr, whose political coalition won the most seats in last year’s election, demanded that the government resign and a snap vote be held.

But for Showqi, who has been at the forefront of the protests, this is not enough.

“We want a complete overhaul,” he said. “We want those in power to be put on trial, and we want to choose from a new pool of people who have nothing to do with the traditional parties that have blood on their hands.”

Abdul Mahdi took office last year as a compromise prime minister after inconclusive polls. His government was immediately faced with the massive task of rebuilding after the war against ISIL and the pressing need to solve Iraq’s economic problems.

Critics say Abdul Mahdi’s government has failed to tackle graft and unemployment, among other issues.

In a speech on Friday, Abdul Mahdi said there is no “magic solution” to Iraq’s problems but promised to implement reforms.

“The economy is too heavily dependent on oil and corruption has been a rampant problem since 2013,” said Aymenn Jawad al-Tamimi, an independent analyst who focuses on Iraq.

“The private sector is underdeveloped and there is too much dependence on a bloated public sector to create more government jobs,” he added, calling for “radical change in the way things work” to prevent the situation from deteriorating.

“Cosmetic changes, bringing in technocrats, will not work. Instead, Iraq needs systemic changes to strengthen an independent judiciary and government institutions against the many parties that rule,” he said.

Mansour noted that “political parties and individuals” are stronger than government institutions in Iraq, and as such, Abdul Mahdi – who lacks a political party and a parliamentary bloc – and his cabinet have been unable to pursue reforms in a meaningful way, he added.

“The parties rely on proxies in each ministry – such as director generals or deputy ministers – to ensure that even technocratic ministers find it difficult to implement reforms.”

In Baghdad, tension remains high as mobile patrols drive through the streets.

Movement is still restricted in parts of the city, with security forces blocking access to Tahrir Square, the focal point of the protests.

According to Showqi, protesters are still being arrested from their homes, while snipers continue to “surround the square”.

Still, he said, there is no turning back.

“The fear has been removed – I have nothing to fear any more,” Showqi said.

“We will continue protesting because we have nothing to lose,” he added. “It’s better to die with honour.” 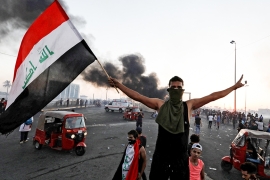 Iraq protests: All the latest updates 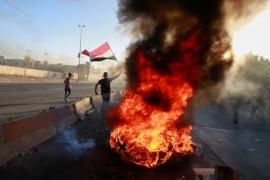 ‘System needs to change’: What do the Iraqi protesters want?

Protests over lack of jobs, services, and government corruption erupt in Baghdad and quickly spread to other Iraqi cities, killing dozens. 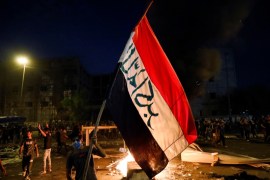 Iraq’s protests: All you need to know in 500 words