President Recep Tayyip Erdogan has said Turkey will carry out an “air and ground military operation” east of the Euphrates River, prompting US-backed Syrian Democratic Forces (SDF) to warn of an “all-out war” to defend the region they control.

It was Erdogan’s most direct indication of a unilateral incursion into Syria since Ankara and Washington decided to establish a “safe zone” there.

The operation, which aims to clear groups Turkey considers “terrorists” from the border region, could start as soon as Saturday or Sunday, Erdogan said while speaking at the opening of his AK Party‘s annual camp on Saturday.

“We will conduct this [operation] on the ground and in the air,” Erdogan said, adding it would be in the east of the Euphrates River.

“We have made our preparations, we have completed our operation plans, given the necessary instructions,” he said.

The comments came days after Erdogan said Ankara has no choice but to act alone in forming a “safe zone” along its border with northeastern Syria since the United States has “taken too long to act”.

The NATO allies agreed to establish the zone on the Syrian border on August 7. Despite beginning joint patrols along the border in September, the two have been at odds over several details of the plan.

Ankara and Washington have disagreed over how far the area should extend, who should control it and what groups should be cleared from the area.

Turkey has said the zone should stretch 30 kilometres (19 miles) into Syria and be cleared of members of the People’s Protection Units (YPG), a Kurdish militia operating in Syria that Turkey considers a “terrorist organisation”.

The US supports the SDF, which is led by the YPG and was key in defeating the Islamic State of Iraq and the Levant (ISIL or ISIS) fighters in Syria.

Turkey, which currently hosts 3.6 million Syrian refugees, also says it wants to settle up to two million refugees in the “safe zone”.

The SDF, which is fighting the Syrian government forces, quickly responded to Erdogan’s comments, saying it would “not hesitate to turn any unprovoked [Turkish] attack into an all-out war”.

On Friday, a group of Turkish-backed rebels fighting in Turkey pledged to back a potential cross-border offensive by Ankara.

Erdogan has repeatedly called on Turkey’s allies to provide financial support for the “safe zone”, including in his speech at the United Nations last month, but has been met with a tepid response.

The plan is also expected to face opposition from Syrian President Bashar al-Assad and from Russia and Iran, Damascus’s most powerful backers.

The main opposition party in Turkey, the Republican People’s Party (CHP), has also said Damascus should be involved in any actions taken by Turkey in setting up the “safe zone”. 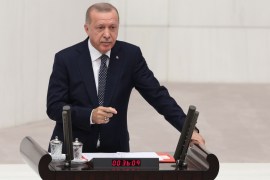 Erdogan: Turkey has no choice but set up Syria ‘safe zone’ alone

Deadline set by Turkey for action with US expires, bringing prospect of unilateral military intervention closer. 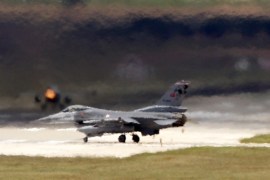 Turkish Ministry of National Defence says drone intruded into its airspace 6 times before being shot down on Sunday.