Iraqi security forces opened fire on protesters on Friday in Baghdad after they gathered for a fourth day of demonstrations against corruption, unemployment and poor public services.

Security forces fired directly at the demonstrators, not in the air, an AFP news agency correspondent reported. There was no immediate word on any casualties.

“These protesters have now been dispersed to neighbouring streets and there are running battles taking place,” said Al Jazeera’s Imran Khan, reporting from Baghdad.

Despite the shooting, the Iraqi capital was mostly quiet ahead of Muslim Friday prayers. An ongoing curfew, defied by thousands of demonstrators on Thursday, saw army and special forces deploy around central squares and streets.

The violence erupted despite the prime minister going on TV to let demonstrators know their “legitimate demands” had been heard while urging them to stay home.

Prime Minister Adel Abdul Mahdi compared the harsh security measures his government imposed – including cutting internet services and ordering a curfew – as “bitter medicine” that needed to be swallowed.

He said the turmoil could lead to “the destruction of the state, the entire state”, but refrained from directly responding to the protesters’ demands.

Rallies erupted spontaneously on Tuesday – mostly spurred by young people wanting jobs, improved services such as electricity and water, and an end to endemic corruption in the oil-rich country.

Iraqi security forces have fired live rounds and tear gas every day since to disperse the protesters, killing at least 31 people and wounding hundreds of others.

Police and medical sources told Reuters news agency on Friday the death toll climbed to 44. The largest number of casualties occurred in the southern city of Nassiriya where 18 people were killed, followed by Baghdad where the toll stood at 16.

Internet access has been cut in much of Iraq since late Wednesday in a desperate move to curb the rallies.

“We will not make empty promises … or promise what we cannot achieve,” Abdul Mahdi said in his televised speech, broadcast at 2:30am local time (11:30 GMT Thursday).

He said there was “no magic solution” to Iraq’s problems but pledged to work on laws granting poor families a basic income, provide alternative housing, and fight corruption.

The International Committee of the Red Cross (ICRC) called on security forces and demonstrators to use restraint.

“The use of force by security forces must be proportionate to the situation,” said Katharina Ritz, ICRC’s head of delegation in Iraq. “In particular firearms and live ammunition must only be used as a last resort and to protect against an imminent threat to life.”

The mostly leaderless protests have been concentrated in the capital, Baghdad, and in predominantly Shia areas of southern Iraq, bringing out jobless youths and university graduates who are suffering under an economy reeling from graft and mismanagement.

“The security measures we are taking, including temporary curfew, are difficult choices. But like bitter medicine, they are inevitable,” he said. “We have to return life to normal in all provinces and respect the law.”

The unrest is the most serious challenge for Abdul Mahdi’s year-old government, which also has been caught in the middle of increasing US-Iran tensions in the region.

More than 1,000 Iraqis have been wounded as security forces have fired live rounds and tear gas.

“The hospitals are filling up,” Ali al-Bayati, a spokesman for Iraq’s human rights commission, told the Washington Post. Many people, he said, were in critical condition.

“What’s going to happen in the coming hours is going to be crucial. If Sistani criticises the government for its heavy-handed response or if he urges people to join the demonstrations, then these protests will get much, much larger,” said Khan.

Iraq has the world’s fourth-largest reserves of oil, according to the IMF, but much of its population of 40 million lives in poverty and without decent healthcare, education, or power and water supply.

“This is an uprising from the people who suffer,” Haider al-Lami, 29, told the Post. “It represents them and only them. I hope this can reform a broken system.” 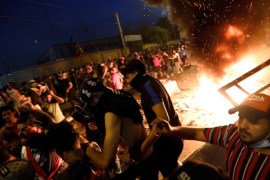 Adel Abdul Mahdi’s office says he is prepared to meet representatives of protesters as unrest continues for third day. 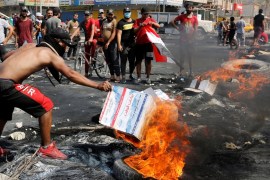 Authorities impose curfew and cut internet access in many cities as death toll from three days of mass protests hits 20. 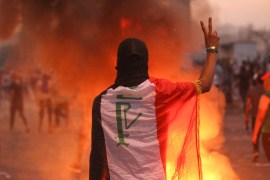