Embattled Hong  Kong leader Carrie Lam invoked the use of emergency powers on Friday, allowing the government to ban face masks at protests, in an attempt to further clamp down on pro-democracy rallies that have rocked the city since June.

“Violence is destroying Hong Kong,” Lam said, adding that the ban of face masks would be an “effective deterrent”, as it would prevent protesters from “hiding their identity”.

While she clarified that the city is “not in a state of emergency”, the city’s chief executive also warned that “if the violence escalates, we will have to look at things we need to do to counter” the protests.

As Lam spoke, thousands of masked protesters marched in the streets of the city to express their opposition to her decision.

The demonstrators raised their arms and shouted pro-democracy slogans.

Seething public anger against Chinese rule in the semi-autonomous city has underscored increasingly violent confrontations between police officers and demonstrators.

Protesters have used face masks along with yellow helmets, goggles and respirators to protect themselves from tear gas, rubber-coated bullets and water cannon, and to avoid identification.

Pro-Beijing legislators have been urging Lam to introduce the emergency ordinance since Tuesday, when violent protests in Hong Kong overshadowed the 70th-anniversary celebrations for the founding of the People’s Republic of China.

“If we had the law … then this would have a deterrent effect on some people,” pro-Beijing legislator Elizabeth Quat told reporters on Thursday.

Joshua Wong, secretary general of pro-democracy Demosisto party, warned that the ban of the use of masks only “marks the beginning” of more government repression.

Al Jazeera’s Scott Heidler, reporting from Hong Kong, said that the latest order could likely backfire against the government.

He quoted protesters as saying that the ban would only harden their resolve to protest against the government.

It was not clear how the government would implement the mask ban in a city where many of its 7.4 million residents wore them daily to protect against infection following the outbreak of the deadly Severe Acute Respiratory Syndrome (SARS) in 2003.

Police fired a record 1,400 rounds of tear gas and used water cannon to break up Tuesday’s protests, which flared up in different parts of the city.

An 18-year-old protester was shot in the chest by a police officer after his unit was involved in a skirmish with protesters armed with pipes.

The secondary school student remains in hospital in a stable condition and was on Thursday among a number of people charged with rioting.

A couple of hundred people rallied outside court to show their support for the protesters, Al Jazeera’s Sarah Clarke said.

“Police are still under pressure about why they used live bullets, and why they targeted the protester’s chest,” she said.

Pro-democracy legislator Dennis Kwok said introducing an emergency law would signal “the beginning of a slip towards an authoritarian state”.

“The authorities by now should have listened to the Hong Kong people. Their yearning for freedom, liberty and democracy is not going to go away,” he said.

The protests were ignited by a now-scrapped plan to allow extraditions to the mainland.

But after Beijing and local leaders failed to respond to demonstrators’ demands the rallies snowballed into a wider movement calling for democratic freedom and police accountability. 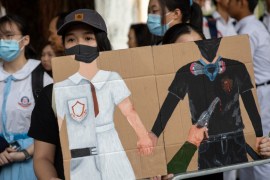 Tsang Chi-kin charged with two counts of assaulting police and one count of rioting during a protest on Tuesday. 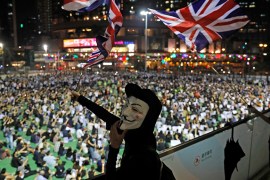 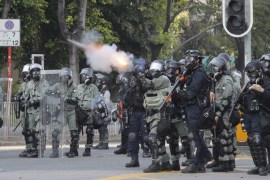