London, United Kingdom – British voters are set to decide the fate of Brexit after parliament backed a general election on December 12 that is likely to be the most momentous for a generation.

An election bill passed by 438 to 20 MPs succeeded in doing what the complex issues surrounding the United Kingdom’s withdrawal from the European Union have singularly failed to do during more than two divisive years of wrangling – unite all the main parties.

The leaders of the country’s two largest parties – Conservative Prime Minister Boris Johnson and Labour opposition leader Jeremy Corbyn – welcomed the move, but the stakes for both could not be higher.

“This is a high-risk strategy for Boris Johnson in keeping with the whole of his premiership, which has been high-stakes poker – and hasn’t worked out particularly well for him so far,” said Mark Shanahan, head of the department of politics and international relations at the University of Reading.

The fate of Brexit could now be in the balance as the UK’s political parties gear up for a rare winter campaign – an election has not been held in December since 1923 – to decide the country’s direction for generations to come.

David Jeffrey, a lecturer in British politics at the University of Liverpool, said: “If the Conservatives lose this then the path to a second referendum on Brexit is wide open, which it is easily imaginable that the ‘Leave’ vote would lose – and then where are we?”

Parliament’s decision to back a December poll follows pressure from Johnson to go to the electorate as part of his strategy to ensure Britain’s departure from the EU.

MPs had thwarted his election call three times, believing it to be an attempt by his hardline supporters to engineer a “no-deal” Brexit that economists say would be disastrous for the country.

At the weekend, however, the Liberal Democrat and Scottish National parties broke ranks to back a poll.

Both see this as an effort to change the parliamentary arithmetic in a way that could result in support for a second referendum – with Labour reluctantly falling into line when it became clear that Johnson would get his wish.

The General Election has just been called.

It's time for real change. pic.twitter.com/aiUwhxm5K6

Johnson’s gamble is that voters weary with the Brexit stalemate will give him the mandate to withdraw by spurning “obstructive” MPs in a so-called “people versus parliament” poll.

Analysts say he is taking a huge risk in his attempt to create a new parliamentary majority behind the withdrawal deal he agreed with Brussels on October 17 and tried to rush through parliament.

Johnson had promised that the UK would leave the EU “do or die” on October 31 but was forced to ask for an extension after failing to get the deal through Parliament.

Shanahan said: “This is a high-risk strategy to try and create a majority – there are splits within his own Conservative Party and his manifesto is going to be quite a sell.

“But he has got some wind in his sails, he is a big character – and we will now see how good he is as a campaigner and leader.”

Jeffrey pointed to Labour’s surprise gains in the 2017 election against Johnson’s predecessor Theresa May when the opposition party bounced back. The result was later attributed to Corbyn’s campaigning skills.

“Campaigns can have an impact – and Johnson could be caught off guard when he is trying to make this a Brexit election and there are other issues that come into play.”

A key risk faced by the Conservatives could be tactical voting by “Remain” supporters who want to stay in the EU.

Another potential hazard facing the prime minister is The Brexit Party formed before this year’s EU elections by long-term anti-EU politician Nigel Farage. It wants Britain to leave the bloc without a deal and could weaken the Conservative vote.

Shanahan said: “The Brexit Party is a huge threat to him – if you think about the best political performer we have in this country, it is probably Nigel Farage.

“What they could do is split the natural Conservative vote in a number of constituencies where they have tiny majorities.”

Jeffery said much could now depend on the extent to which those who support quitting the EU can vote as tactically as the “Remainers”.

“It looks like they will, although there are not going to be any formal deals between the Conservatives and the Brexit Party. But my hunch is that the Brexit Party’s vote will be squeezed by Johnson.”

Steven Fielding, professor of political history at the University of Nottingham, said that despite his high profile, Johnson remains “untested” as a campaigner and challenged by “trust issues” – making it unclear how the Brexit Party will proceed.

“There are still imponderables and a lot of uncertainty – the Brexit Party has about 10-15 percent of support: if they throw in their lot with the Conservatives then that improves Johnson’s chances immeasurably, but if they don’t that will harm him.”

The most awkward questions now being asked about this election, however, concern Labour, which is itself divided over Brexit and trailing in opinion polls.

Splits have opened up over the timing of the election, with some Labour MPs seeing their only chance of survival as going to the polls but others fearing a wipe-out.

Shanahan has seen first-hand how effective Corbyn can be on the hustings and believes the Labour leader should not be written off.

The electorate is unprecedentedly volatile - at least about 20 percent to a third will be switching during the campaign.

Nonetheless, he adds, circumstances have changed since the 2017 election.

“Corbyn’s policies from 2017 proved very popular, but he is up against more of a celebrity politician with Boris Johnson rather than the uncomfortable Theresa May, and there is a very different dynamic here.

“However, both leaders are wounded – so we will see which one comes out as the less wounded.”

Corbyn is calculating that he can move the debate away from Brexit, promising an “ambitious and radical campaign for real change”.

Observers have also cautioned against campaigns focusing entirely on the UK’s withdrawal from Europe.

Fielding said: “If things stood as they are now, it’s not going to look good for Labour.

“But we do know that the electorate is unprecedentedly volatile – at least about 20 percent to a third will be switching during the campaign, and if that is the case even though Labour is lagging behind the Conservatives there’s scope for thinking it might recover its position.” 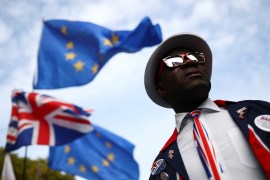