A large new fire has broken out to the north of Los Angeles, prompting further evacuations as crews continue to battle blazes across California, some of which could be made worse by seasonal winds.

The Santa Ana winds are a regional weather phenomenon that sends gusts from desert regions east of the state to the coast of Southern California. They are forecast to reach sustained speeds of 80 to 110 kilometres per hour (50 to 70 miles per hour) on Wednesday and Thursday, raising the risk of sparks and embers being whipped into fresh wildfires in unburned areas.

It is a foreboding forecast for firefighters already battling a 240-hectare (9,600-acre) blaze, which ignited on Monday, that is consuming the shrub-covered hills to the west of Los Angeles. That blaze has already forced about 9,000 people to flee their home.

An army of some 1,100 firefighters battled the so-called Getty Fire Tuesday in a narrow window of slower winds. By early Wednesday, crews had managed to contain about 15 percent of the blaze.

The fire started when a dry branch from a eucalyptus tree was flung nine metres (30 feet) by high winds into a city Department of Water and Power line and caused sparks, authorities said.

Mayor Eric Garcetti called it an “act of God”. The city had previously cut away brush and trees from around the line, officials said.

The most recent fire also started in the southern part of state in the Simi Valley area north of Los Angeles early Wednesday. The flames forced the evacuation of the Ronald Reagan Presidential Library and nearby homes.

Reagan library spokeswoman Melissa Giller said the hilltop museum in Simi Valley was safe and being protected by firefighters.

The National Weather Service had issued an “extreme red flag” warning for wildfires in Los Angeles county and Ventura county, which includes the Simi Valley.

“I don’t know if I’ve ever seen us use this warning,” forecaster Marc Chenard told the Reuters News Agency. “It’s pretty bad.”

Scientists have linked an increase in frequency and intensity of wildfires to climate change.

In the north of the state, in Sonoma County near San Francisco, fire officials reported progress in their battle against a 310sq-km (120sq-mile) wildfire that has devastated Sonoma County. Officials say the fire was 30 percent contained by Wednesday, a significant increase from recent days.

The fire destroyed at least 206 structures, including 94 homes, and threatened 90,000 more, most of them homes, authorities said.

Winds topped out at 112kph (70mph) north of San Francisco Bay and began to ease early Wednesday, but forecasters said the fire danger would remain high because of continuing breezes and dry air.

Citing progress made against the fire, California Governor Gavin Newsom said the number of evacuees in Northern California had diminished from 190,000 at the peak of that blaze to 130,000 as of Tuesday.

The Pacific Gas and Electric company (PG&E), the state’s largest utility, acknowledged last week that the Kincade Fire broke out near a damaged PG&E transmission tower at about the time a live high-voltage line carried by that tower malfunctioned.

New round of blackouts

Frustration has grown in Northern California as PG&E undertook its third round of sweeping blackouts in a week, hoping to prevent its electrical equipment from toppling or coming into contact with branches and sparking fires.

The blackouts, the most recent of which began on Tuesday, have left 1.5 million people in some 30 counties without electricity.

Across the darkened neighbourhoods, people worried about charging mobile phones and electric vehicles, finding petrol and cash, staying warm and keeping their food from spoiling. Some ended up at centres set up by PG&E where people could go to power their electronics and get free water, snacks, flashlights and solar lanterns. 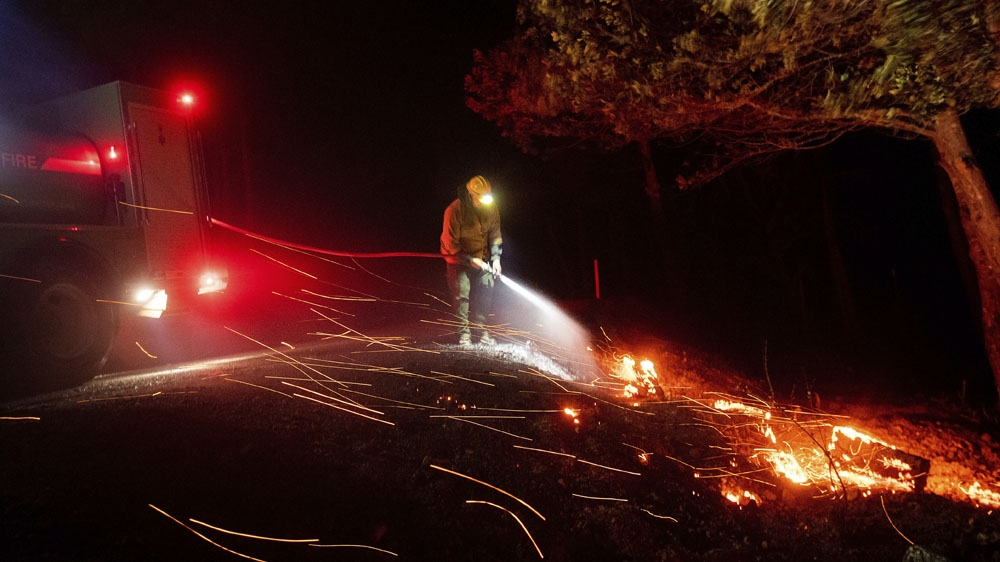 “I don’t think PG&E really thought this through,” Jane Sykes, a chef and caterer told the Associated Press. She added the blackouts forced her to throw out $1,000 in baked goods because they could not be refrigerated.

PG&E officials have said they understood the hardships caused by the blackouts, but insisted they were necessary.

Newsom and top utility regulators have accused PG&E of mismanaging its power system and failing for decades to make the investments needed to adequately modernise and safely maintain its equipment.