At least 18 people were killed in the incident on Tuesday, unnamed security sources told The Associated Press news agency.

“There are fabricated and false news making the rounds on social media about events that have not happened and casualties that have not occurred,” al-Khitaby told reporters at a news conference.

Karbala’s police chief also denied in a statement that any protesters had been killed and said only one person died in an unrelated criminal incident, calling footage of shots being fired at protesters shared on social media fabricated and designed to “incite the street”.

The rebuttals came amid multiple differing accounts and death tolls concerning the reported incident in Karbala’s Education Square, where protesters had set up tents as part of a sit-in.

Footage circulating online purporting to show the aftermath of the incident showed fires and people running away to the backdrop of heavy gunfire, while witnesses told AP that masked gunmen had opened fire on those gathered at the site.

“We saw masked men dressed all in black and they fired live bullets toward the square,” one protester who spoke on condition of anonymity told AP.

“People fell dead and wounded right next to me. We tried to escape but when we fled into the alleys we ran into moving checkpoints set up by these forces. They arrested people and searched their phones for video of what had happened,” the individual added.

Another witness said hundreds of protesters were in the encampment when someone opened fire from a passing car. Then, masked gunmen in black arrived and started shooting at the protesters, and the tents caught fire.

Tuesday’s incident came as Iraqis took to the streets across the country for a fifth consecutive day to protest against official corruption, mass unemployment and failing public services.

The protests have followed a previous bout of leaderless and largely spontaneous anti-government demonstrations in early October. Those involved have been met with a forceful response from security forces, who have used tear gas, rubber bullets and live ammunition in a bid to break up the rallies.

Scores of people have been killed since the demonstrations resumed on Friday, while more than 150 others were killed during the protests three weeks ago amid a major crackdown by security forces.

The ongoing turmoil has broken nearly two years of relative stability in Iraq, which in recent years has endured a United States-led invasion and protracted fighting, including against the Islamic State of Iraq and the Levant (ISIL or ISIS) armed group.

Efforts to quell the unrest by Prime Minister Adel Abdul Mahdi, including pledges to address demonstrators’ grievances by reshuffling his cabinet and delivering a package of reforms, have seemingly proved unsuccessful.

Amid widespread ire focused not just on Abdul Mahdi’s administration but also Iraq’s wider political establishment, which many say has failed to improve the lives of the country’s citizens, analysts said the demonstrations were unlikely to die down.

“Iraqis’ main demands are [for the government] to address the issue of corruption, to step down, and for a new election to be held,” Ali al-Nashmi, an Iraqi academic at Al-Mustansiriyah University, told Al Jazeera.

Millions of people lack access to adequate healthcare, schooling, water or power supplies, and much of the country’s infrastructure is in tatters. 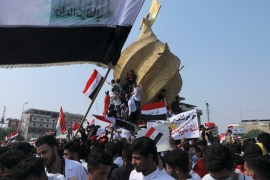 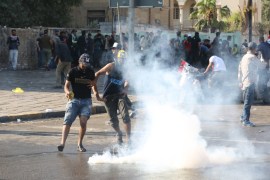 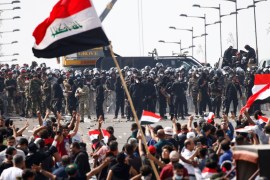