Tens of thousands of Iraqis have marched on Baghdad’s central Tahrir Square as protests calling for economic reform and removal of the country’s political elite continued for a fifth successive day.

Tuesday’s gathering in the Iraqi capital came after an overnight curfew and was the largest of its kind since the eruption last week of a second wave of mass demonstrations this month against official corruption, mass unemployment and failing public services.

Security forces stationed on the nearby Jumhuriya bridge lobbed tear gas at protesters who tried to break through to the heavily fortified Green Zone, which houses government buildings and foreign missions, Reuters news agency reported.

Surrounding streets brimmed with cars, taxis, and motorcycles while protesters, mostly young men – many of whom were draped in Iraqi flags – chanted “with life and blood we defend you Iraq”.

Al Jazeera’s Natasha Ghoneim, reporting from Baghdad, said the mood on the streets was “boisterous and starting to get a little bit chaotic”.

“It is the largest crowd I have seen, it is body-to-body,” Ghoneim said.

“They are being bolstered by support from a large number of students, while teachers and attorneys unions have said to their members ‘don’t go to work, come to Tahrir Square and show your solidarity’,” she added.

The protests in recent days have followed a previous bout of anti-government demonstrations held in early October.

Hundreds of people have been killed since the rallies broke out and were met with a combative response from security forces, who have used tear gas, rubber bullets and live ammunition against those taking to the streets and have been accused by a government-appointed inquiry of using excessive force.

In the latest reported incidence of bloodshed, at least 18 protesters were killed in the early hours of Tuesday in the southern city of Karbala when masked attackers allegedly opened fire at protesters staging a sit-in, security sources told The Associated Press news agency.

Citing medical and security sources, Reuters news agency put the death toll from the incident at at least 14.

The semi-official Iraq High Commission for Human Rights meanwhile said one person had been killed in the “events” in Karbala, while 142 members of the security forces and 50 protesters had been wounded.

However, local authorities and the military denied anyone was killed.

Naseef al-Khitaby, Karbala’s governor, for his part, dismissed the reports as “false news”.

“There are fabricated and false news making the rounds on social media about events that have not happened and casualties that have not occurred,” al-Khitaby told reporters at a news conference.

Faced with the most significant challenge yet to his year-old government, Iraqi Prime Minister Adel Abdul Mahdi has in recent days moved to try and address demonstrators’ grievances by pledging to reshuffle his cabinet and deliver a package of reforms.

But the measures have failed to quell the unrest, with protesters’ ire focused not just on Abdul Mahdi’s administration but also Iraq’s wider political establishment, which many say has failed to improve the lives of the country’s citizens.

On Tuesday, he joined protesters in the southern city of Najaf and also invited the head of a rival political bloc to work with him on introducing in parliament a vote of no confidence in Abdul Mahdi.

Amid the spiralling political crisis, Abdul Mahdi meanwhile said he could not call an election unilaterally and that parliament must vote with an absolute majority to dissolve itself.

The Iraqi leader added that if al-Sadr wanted a change in government he could simply agree with his rival on a replacement.

The ongoing turmoil has shattered the nearly two years of relative stability enjoyed in Iraq following the defeat of the Islamic State of Iraq and the Levant (ISIL or ISIS) armed group.

Many protesters feel the country’s vast oil wealth has not adequately trickled down to its citizens, nearly-three fifths of whom live on less than $6 a day, World Bank figures show. 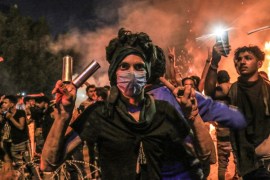