A rare river-dwelling crocodile has started to lay eggs after being paired with an introduced male, Bangladesh conservationists said on Sunday, raising hopes a successful hatching could save the critically endangered species from extinction.

The South Asian nation, with its vast network of rivers, was once a key habitat for the gharial, a fish-eating crocodile distinctive for its lengthy body and long, thin snout.

But today they are virtually extinct in Bangladesh and the few which are seen likely made their way downstream from India.

A male gharial, a 41-year-old named Gorai, was brought from the capital Dhaka to a zoo in the northwestern city of Rajshahi in 2017 in the hope he would mate with a 35-year-old female called Padma.

The reptiles are named after tributaries of the Ganges river.

“When we introduced them, there were fears these old gharials may have lost the urge to mate,” Sarowar Alam, who heads the International Union for Conservation of Nature’s Bangladesh gharial project, told AFP.

The species usually only breed until the age of around 50.

“But not only have they mated, she has also laid eggs,” he added.

But he expected the female to lay more eggs as the pair had bonded well and were mating regularly.

“If we can build proper sand banks in the zoo, the female gharials will lay more eggs,” Uddin told AFP.

“But the most encouraging news is that the female is laying eggs.”

There has been no sighting of mature gharials in Bangladesh’s two Himalayan rivers — the Ganges and Brahmaputra – in more than 10 years.

The species has also all but vanished from its habitats in Pakistan and Bhutan, with fewer than 200 existing in rivers mainly in India but also Nepal.

If the breeding programme is a success, it is hoped the young can be released back into the wild.

The Padma and Jamuna rivers, the main tributaries of the two Himalayan rivers, have been identified as potential sanctuaries for the species should it repopulate.

As part of the exchange programme, a female gharial was also moved to a Dhaka zoo to stay with the facility’s three male crocodiles. 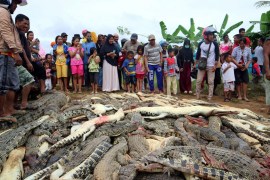 The death of a man at a breeding farm by a crocodile prompts a slaughter of hundreds of protected reptiles by villagers. 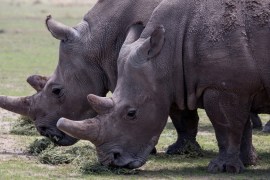