More than 100 migrants and refugees are still stranded onboard a rescue ship in the central Mediterranean after being rescued from an overcrowded rubber boat 11 days ago.

Doctors Without Borders (MSF) and SOS Mediterranee, the charities operating the rescue vessel Ocean Viking, said they have requested permission to disembark in Malta or Italy but have not received any response despite a plan by some EU countries to resolve such cases quickly.

Libya is a major departure point for African migrants trying to reach Europe. But figures from the International Organization for Migration (IOM) in July showed at least 5,200 people are currently trapped in official detention centres, often in appalling conditions.

“A first medical assessment showed all survivors in a stable condition. A few were weak due to the exhaustion and being exposed to the sun, with no water to drink. Many were dehydrated but have recovered,” according to an MSF statement sent to Al Jazeera.

“Many were quite emotional, especially mothers with children, when they came onboard and started crying out of relief that they survived.”

Thirty-one of the 41 minors rescued are unaccompanied, with six of those younger than 16 years. Two infants – aged two months and 11 months – were also rescued as part of the group.

The standoff comes despite a plan revealed by some EU countries earlier this month to resolve such cases quickly.

At a meeting of EU interior ministers in October, Ireland, Luxembourg and Portugal agreed to participate in the “fast-track” plan by Germany, France, Italy and Malta, which would screen migrants, relocate asylum seekers, and return people who do not apply or qualify for asylum, all within four weeks.

“This isn’t how you treat people who have been rescued from a boat in distress. This is adding to their anxiety, mental suffering and the mental trauma,” Jay Berger, MSF project coordinator onboard the Ocean Viking, told Al Jazeera.

“This, again, shows lack of care, lack of dignity that Europe puts on the people that are in need of rescue and care. They should be treated with dignity and respect they deserve.”

"Several women & girls have told how they fled their home countries due to forced marriage, female genital mutilation or sexual violence. It’s very upsetting to hear some even took contraception prior to their journey because they knew they could be raped” Stefanie #MSF medic pic.twitter.com/nOChxZOfW6

MSF officials said the “cold-related symptoms, like running noses, coughing, head and body pain, reinforced by the more challenging weather conditions accompany the more invisible mental health conditions where people are less hungry, more easily agitated, less patient due to the lack of control they have over their situation”.

The sea route between Libya and Italy is the world’s deadliest for migrants and refugees, according to the UN refugee agency, the UNHCR. Almost 700 people have died or gone missing crossing the central Mediterranean this year, according to UN’s Missing Migrants Project.

At least 18,000 people have lost their lives in Mediterranean crossings since 2014, according to the IOM. 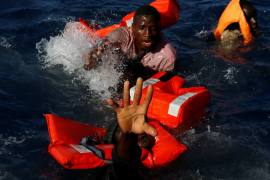 More than 1,000 people dead in Mediterranean so far this year

It is the sixth year in a row that more than 1,000 deaths have been registered in a single year. 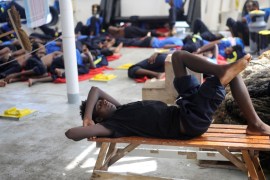