Authorities in Iraq have declared a curfew in the capital, Baghdad, where mass anti-government demonstrations continue for a fourth day.

The renewed protests came weeks after an earlier wave of rallies broke out as a result of widespread anger at high-level corruption, mass unemployment and poor public services. More than 200 people have been killed in this month’s demonstrations in Baghdad and several southern cities.

As protests continued on Monday, state media quoted the Baghdad Operations Commander as saying that the curfew from midnight to 6am local time will be valid “until further notice”.

Earlier in the day, at least two anti-government protesters were reportedly killed and more than 100 people were wounded in clashes with security forces in Baghdad as thousands of students joined in the demonstrations in defiance of a government order and tear gas from security forces.

Iraqi security and medical officials confirmed the latest casualties on Monday, speaking on condition of anonymity because they were not authorised to brief reporters, according to The Associated Press news agency.

The students skipped classes at several universities and secondary schools in Baghdad and southern cities to take part in the protests, despite the government ordering schools and universities to operate normally. It was not clear how many students were among those killed and wounded.

“It’s a student revolution, no to the government, no to parties!” demonstrators chanted in Tahrir Square, the centre of the protests.

Protesters have camped out in the central roundabout and volunteers have brought them food, hoping to recreate the revolutionary atmosphere of similar rallies held across the region during and after the 2011 Arab Spring.

Security forces have fired tear gas and stun grenades to keep protesters from crossing a main bridge leading to the Green Zone, home to government offices and embassies.

Shia religious leader Moqtada al-Sadr on Monday called on Abdul Mahdi to announce early parliamentary elections overseen by the United Nations and without the participation of existing political parties.

Sadr’s bloc, which came first in a 2018 election and helped bring the prime minister’s fragile coalition government to power, said on Saturday it was going into opposition until the demands of protesters were met.

On Monday, Iraq’s parliament voted to dissolve the provincial councils, cancel the extra privileges of top officials and summon Abdel Mahdi for questioning.

Abdel Mahdi has proposed a laundry list of reforms, including hiring drives, increased pensions and promises to root out corruption.

President Barham Saleh has also held discussions with the UN on electoral reform and amendments to the 2005 constitution, but they have not appeased protesters.

In solidarity with demonstrators, four MPs resigned late on Sunday.

‘System has done nothing’

The ongoing turmoil has broken nearly two years of relative stability in Iraq, which in recent years has endured a United States invasion and protracted fighting, including against the Islamic State of Iraq and the Levant (ISILor ISIS) armed group.

The demonstrations have posed the biggest challenge yet to the year-old government of Prime Minister Adel Abdul Mahdi, who has pledged to address demonstrators’ grievances by reshuffling his cabinet and delivering a package of reforms.

Unemployment, particularly among young people, is a major issue. Millions of people lack access to adequate healthcare, schooling, water or power supplies, and much of the country’s infrastructure is in tatters. 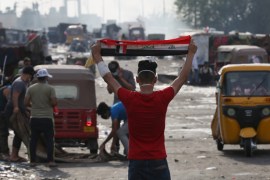 Nationwide demonstrations continue after scores of Iraqis were killed in clashes with security forces over two days. 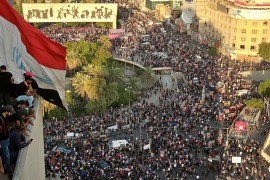